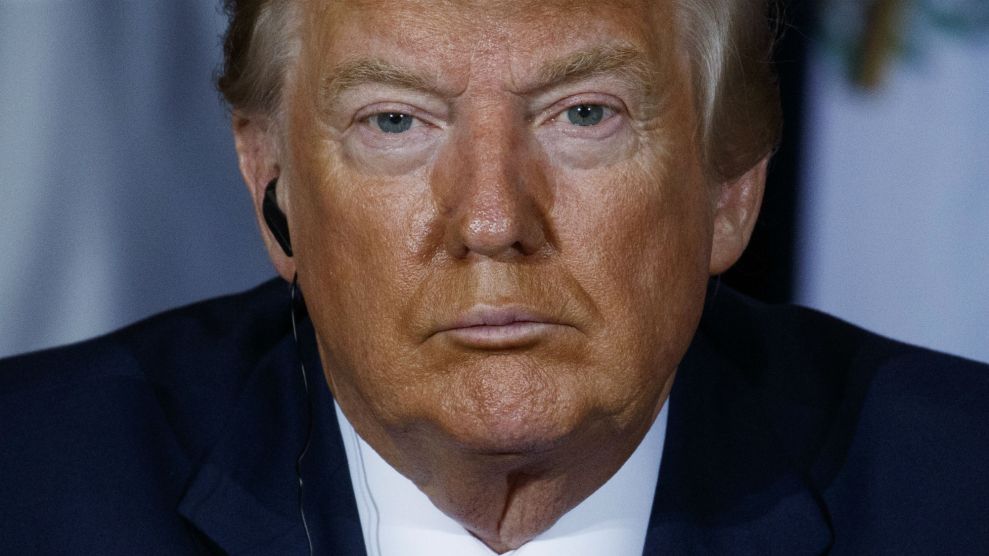 Donald Trump is considering selling his prized luxury hotel in DC, but the reasons don’t entirely add up—and they directly contradict his rationale for refusing to separate himself from his business empire before taking office.

On Friday, the Wall Street Journal reported that the Trump Organization has been in contact with a real estate advisory firm to discuss the possible sale of the Trump International Hotel and is seeking as much as $500 million. Since it opened shortly before the 2016 election, the hotel has been a magnet for Trump’s conservative allies, as well as lobbyists and foreign officials seeking to curry favor with the president. And it has been a lighting rod for criticism because of the conflict of interest it represents.

In a statement, Eric Trump said that there have been interested buyers since the hotel opened but the Trump Organization is now considering a sale because “people are objecting to us making so much money on the hotel, and therefore we may be willing to sell.”

For one thing, it’s not clear the hotel is making “so much money.” According to Trump’s most recent financial disclosure, the hotel reported revenues of $40.8 million in 2018, but that figure, which doesn’t take into account expenses, does not represent the hotel’s profitability. Trump doesn’t actually own the building the hotel is in; he leases it from the federal government. (Trump would be selling the rights to operate a hotel in the building, which he won in a controversial bidding contest.) The lease requires Trump to pay $3 million a year, plus a percentage of the profits, to the Government Services Administration, the agency that oversees the property. But a GSA official testified to Congress last month that Trump hasn’t ever paid much more than the $3 million, suggesting that the hotel may not be making “so much money.”

In January 2017, just days before taking office, Trump held a press conference at which he explained how he would avoid any conflicts of interest between his businesses and his official duties as president. His solution: place his businesses in a trust that he still controlled and had access to. Ultimately, Trump simply refused to divest himself of any assets or install any formal oversight to prevent him from continuing to manage the business. Instead, he said, he would appoint his two adult sons to run his company and install an “ethics adviser” to help avoid conflicts of interest. At the press conference, Sheri Dillon, one of his attorneys, said selling would be out of the question:

Selling, first and foremost, would not eliminate possibilities of conflicts of interest. In fact, it would exacerbate them. The Trump brand is key to the value of the Trump Organization’s assets. If President-elect Trump sold his brand, he would be entitled to royalties for the use of it, and this would result in the trust retaining an interest in the brand without the ability to assure that it does not exploit the office of the presidency.

Further, whatever price was paid would be subject to criticism and scrutiny. Was it too high? Is there pay for play? Was it too much pay to curry favor with the president-elect? And selling his assets without the rights to the brand would greatly diminish the value of the assets and create a fire sale.

Neither the Trump Organization nor Dillon responded to requests for comment about what has changed since Dillon made that argument.

Steven Schooner, a law professor at George Washington University who specializes in government contracting, said that under the terms of the lease, the GSA does have the ability to nix any transfer of the lease but is unlikely to do so unless there is a very good reason to think the buyer would not able to handle the business.

Trump borrowed $170 million from Germany’s Deutsche Bank to finance the renovation of the old building. Because the building is owned by the government, Trump is both the tenant and, as head of the executive branch, the landlord. It’s a situation that was expressly prohibited in the terms of the lease—inked before Trump took office—which forbade the participation of any elected official in the deal. Officials at the GSA later deemed that this troublesome clause posed no issue.

Trump visits the property regularly—one of the reasons so many GOP figures now flock to the lobby bar on a nightly basis—and has the right under the terms of the trust he set up to take cash from the business at any point. At the 2017 press conference, Trump pledged that he wouldn’t discuss business with his sons. But did they consult him on the sale of his prized DC hotel? The Trump Organization didn’t respond to a request for comment on that point.