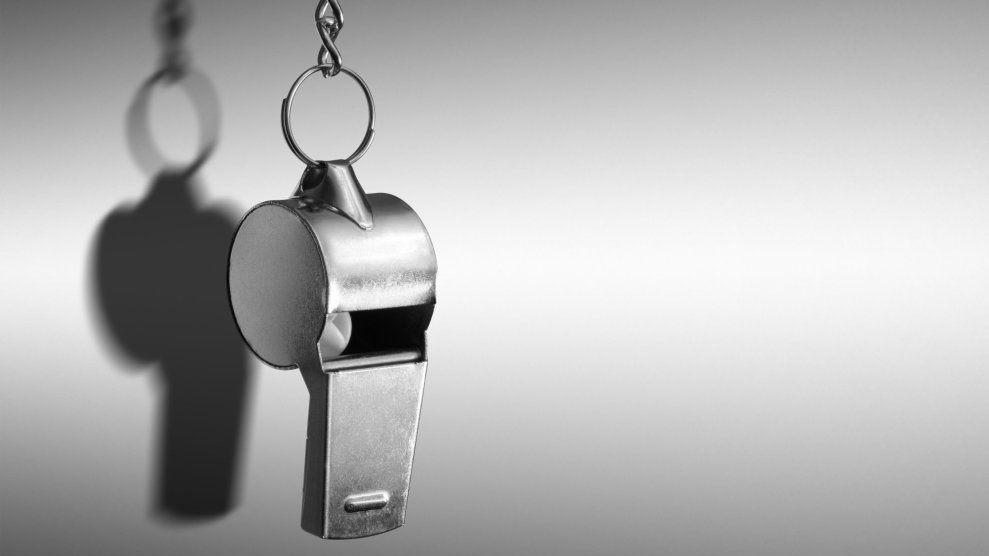 For the entire Trump administration, the federal government has been operating without a functioning agency to protect whistleblowers. “Although seldom in the public spotlight, no institution is more important for accountable government than the Merit Systems Protection Board,” Tom Devine, legal director of the Government Accountability Project said at a February congressional hearing on the independent, quasi-judicial agency. And for more than two years, the board has been dysfunctional.

When it’s working, the MSPB protects whistleblowers who reveal wrongdoings in the management of most federal agencies, covering more than 2 million civilian federal employees. The board was created in 1979 to address retaliation against whistleblowers. When whistleblowers were demoted, stripped of responsibilities, or fired, they were able to turn to the three-member board of the MSPB for intervention. Recent members of the board have been labor lawyers with experience in government.

But since March, the board has had no members.

All three spots were filled until 2015, when a member’s term expired and the Republican-led Senate refused to vote on President Barack Obama’s nominee to replace her. In January 2017, another board member’s term ended, leaving one lone member, whose term ended in March. The Trump administration proposed three nominees to the board: Chad Bungard, deputy commissioner at the Social Security Administration; Dennis Kirk, an Army lawyer; and Julia Clark, who has worked at an agency representing government employees. But their confirmation has been stalled in the Senate because Majority Leader Mitch McConnell (R-Ky.) hasn’t scheduled a vote. McConnell’s office did not return a request for comment.

The lack of a fully functioning board, says Rebecca Jones, policy counsel at the Project on Government Oversight, “will have a potentially chilling effect on federal employees coming forward.”

Protections for whistleblowers have taken on a new urgency in recent months. It was a whistleblower who revealed the July telephone call where President Donald Trump asked Ukrainian President Volodymyr Zelensky for help discrediting Joe Biden ahead of the 2020 elections. After Democrats announced an impeachment inquiry and began investigating the scandal, Trump responded by condemning the whistleblower on Twitter.

….In addition, I want to meet not only my accuser, who presented SECOND & THIRD HAND INFORMATION, but also the person who illegally gave this information, which was largely incorrect, to the “Whistleblower.” Was this person SPYING on the U.S. President? Big Consequences!

For whistleblowers, there are two levels to the MSPB appeals process. After a whistleblower who has experienced retaliation for coming forward files an appeal with the MSPB, the case is assigned to an administrative judge. This judge can determine whether the action the agency took was legal. If the whistleblower does not agree with the decision, he or she can appeal to the board, which would review the case, make its determination, and return the case to the judge for a final disposition. The system doesn’t always work in favor of the whistleblower, as administrative judges rarely reverse their decisions. But the board can offer what Devine describes as “a modest but meaningful good influence” on the judges. Without board oversight, whistleblowers are less likely to win their cases with administrative judges. Devine testified to Congress that between November 2018 and January 2019, only one out of 30 whistleblowers prevailed.

Whistleblowers can still report claims of retaliation to the US Office of Special Counsel, an independent investigative and prosecutorial agency. The office can accept the initial whistleblower complaint and any claims of retaliation, but it doesn’t have the power to force the agency in question to do anything. “There’s really no teeth behind it,” Jones explains.

According to Devine, the ability of the MSPB to provide temporary relief is one of the most important aspects of the Whistleblower Act, which created the board. “These cases can drag on for years,” he says. “During that time, the whistleblower is broke and probably unemployable.” When the board grants a stay, the agency is forced to halt all actions, such as demotions and suspensions, while the case is being investigated. “But since the OSC can’t go to the board,” Devine says, “agencies have been telling the OSC lawyers to get lost.”

The lack of a merit board is particularly detrimental during an administration plagued by scandal. In May 2017, the chief of staff to Tom Price, who was then the secretary of health and human services, sent a memo to employees instructing them to not have any communication with members of Congress or their staffs without prior approval from top officials at the Department of Health and Human Services. The memo did not include any language about exceptions for whistleblowers, drawing the ire of Republican lawmakers. Four months later, Price resigned after a Politico investigation found that he’d used taxpayer money to take private jets for official government travel and family vacations. The following year, Scott Pruitt, the head of the Environmental Protection Agency, was called out by Kevin Chmielewski, an EPA staffer who blew the whistle on Pruitt’s excessive spending on flights to his home state of Oklahoma and stays in expensive hotels. Chmielewski was placed on administrative leave after he refused to approve lavish expenditures. Three months later, Pruitt resigned in a haze of scandal. Chmielewski said he felt vindicated, telling the Hill, “I hate to take a credit for a man losing his job, but I guess I’d have to say that I take the credit.”

In his February testimony to Congress, Devine cited the case of Kim Farrington, a whistleblower at the Federal Aviation Administration. In 2010, the aviation safety inspector was harassed and fired after she blew the whistle on the FAA’s failure to “assure proper oversight of the training of flight attendants.” In 2012, the MSPB overturned the administrative judge’s decision to dismiss her case. Further delays ensued, and in 2016, Farrington complained to the board about the lack of resolution. The administrative judge once again rejected her claims, and her case made its way back to the board. But by that point, there were no board members, and her ordeal has no end in sight.

Blowing the whistle on government wrongdoings has always been a risky gambit. Whistleblowers in the intelligence community have faced jail time under Democratic and Republican administrations. But according to Devine, the lack of a merit board is already affecting whistleblower cases. “Previously, they would win about 7 percent of their cases,” he says. “That rate has dropped to less than 5 percent.” When the board eventually starts back up in earnest, the new members will have a backlog of more than 2,000 cases to comb through, which could take years.