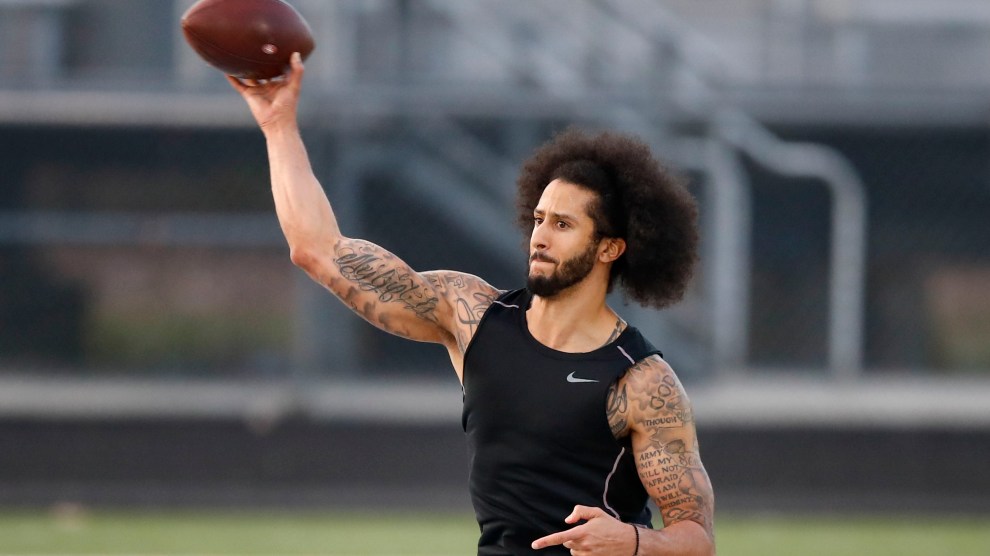 Former NFL quarterback Colin Kaepernick, who became the object of intense conservative criticism for kneeling during the national anthem to protest police brutality and discrimination against African Americans, was set to hit the field this weekend, with a highly anticipated showcase to pave the way for his return to the league after three seasons on the shelf.

On Saturday, the former San Francisco 49er was gearing up for a private workout hosted by the NFL near Atlanta, with scouts from about 25 teams coming to watch. “I’ve been in shape and ready for this for 3 years, can’t wait to see the head coaches and GMs on Saturday,” the 32-year-old free agent tweeted Tuesday. On Twitter, some fans showed their allegiance to him with the hashtag #StillWithKap.

But at the last minute, the shit hit the fan.

Kaepernick was scheduled to work out at the Falcons training facility, and in the hours leading up to the event things seemed to be moving ahead. A group of supporters gathered outside the facility, and though some critics came, too, his protesters could basically be counted on one hand.

Outside of the Falcons facility: Anti-Kaepernick protestors on the left; Kaepernick supporters in much greater numbers on the right. pic.twitter.com/6N5IwwC2OV

Supporters are also sharing their thoughts on Kaep. pic.twitter.com/fMs0Bfha70

But behind the scenes, the showcase was unraveling amid disagreements between Kaepernick and the NFL over a few major points. First, the league wanted the quarterback to sign a waiver that his representatives said went beyond a standard injury waiver and contained additional clauses about a nonguarantee of employment. Kaepernick refused.

He had reason to be wary. Back in 2016, his last season, Kaepernick’s decision to protest racism by kneeling before games earned him a massive following and cast him as a civil rights icon, with some other NFL players following his lead. But his activism also sparked outcry among those who said it was disrespectful to military service members, including Donald Trump. In 2017, the president weighed in at a rally in Alabama. “Wouldn’t you love to see one of these NFL owners, when somebody disrespects our flag, to say, ‘Get that son of a bitch off the field right now,'” Trump said, to big applause. “‘He’s fired. He’s fired!’”

The next year, the league passed a rule to fine teams if players declined to stand during the anthem. Kaepernick became a free agent after the 2016 season but was not signed during the next offseason, prompting him to file a grievance accusing the NFL of working to block him from the league. Both sides reached a settlement in February.

In the days leading up to the showcase, some NFL players and others had questioned whether the league was sincere about courting Kaepernick, or if the workout was more of a PR stunt. So Kaepernick made a second request: On Friday, he asked to bring his own camera crew to film the workout, rather than relying solely on the NFL’s crew. The idea, his reps said, was to make the event more transparent, but the request was rejected by the league, which said the other camera crew could come but not film.

So on Saturday, shortly before the workout, Kaepernick decided to move the showcase from the Falcons’ facility to a high school in suburban Atlanta, where it could be open to journalists and the public. He invited team reps to watch him there, but only a handful of teams showed up. The league released a statement criticizing him for changing plans at the last minute.

Colin Kaepernick’s workout at the Falcons’ training facility at 3 pm is off; his workout now will be at another Atlanta location at 4 pm today.

Here is the official announcement: pic.twitter.com/d9dIfJSbY3

In the end, the highly anticipated event didn’t go as planned. But in any case, Kaepernick showed up smiling and ready to play. It appears his flair for protest and refusal to bow to authority hasn’t waned much since we saw him on the field last: “When you go back,” he said while thanking the scouts who came to watch, “tell your owners to stop being scared.”

Kaepernick thanks scouts from Washington, New York Jets and Kansas City and says: “When you go back, tell your owners to stop being scared.” pic.twitter.com/UMLSrIcn09