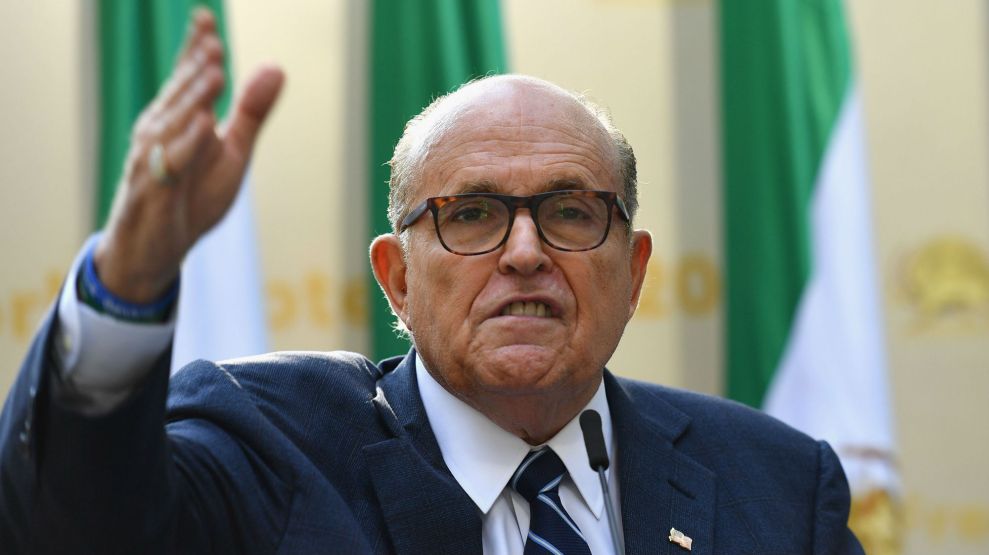 Here’s the thing about Donald Trump’s scandals: they often are too obvious. While Trump and his defenders have claimed there was no shifty quid pro quo in his dealings with Ukraine, all the evidence indicates there was. And the just-released congressional testimony of Ambassador Gordon Sondland, the hotel magnate whose $1 million donation to Trump’s inauguration won him a job as a diplomat, shows that Trump essentially ordered a shakedown of Ukraine and placed his personal lawyer, Rudy Giuliani, in charge of this caper. Kurt Volker, the former special envoy to Ukraine, who worked with Sondland and Giuliani in pursuit of Trump’s political objectives in Ukraine, also fingered Giuliani as the mastermind of this effort in his deposition, which was released on Tuesday.

Sondland, it seems, had trouble recalling all the details of this scheme when he testified; he subsequently amended his testimony after other witnesses told the House committees conducting an impeachment inquiry that Trump had withheld nearly $400 million in military aid to muscle Ukrainian President Volodomyr Zelensky to produce political dirt useful for Trump. But in his original testimony, Sondland did detail clearly the Trump-Giuliani plot to abuse the office of the president. And it’s all damn simple.

In his testimony, Sondland described what is now a familiar set of facts. On May 20, he attended the inauguration of Zelensky as part of an American delegation that included Energy Secretary Rick Perry, Senator Ron Johnson (R-Wis.), and Alex Vindman, a Ukraine expert at the National Security Council. They all came away believing Zelensky was a swell fellow and that Washington should move quickly to strengthen its relationship with him. Three days later, they briefed Trump and suggested that he first hold a phone conversation with Zelensky and then a White House visit with the Ukrainian—moves that the Ukrainians deeply desired. (After all, Ukraine was—and still is—engaged in a war with Russia, which has seized portions of the country, and buttressing the bonds between Ukraine and the United States was a top priority for Kiev.)  Trump, though, was not eager for this, Sondland testified. “He just kept saying: ‘Talk to Rudy, talk to Rudy,'” Sondland said.

This was something of a WTF moment for Sondland and the other officials. Why was Giuliani involved at all? Sondland testified that he and the rest were “disappointed by the President’s direction that we involve Mr. Giluliani. Our view was that the men and women of the State Department, not the President’s personal lawyer, should take responsibility for all aspects of U.S. foreign policy toward Ukraine.” But, Sondland said, they were faced with a choice: “We could abandon the goal of a White House meeting for President Zelensky, which we all believed was crucial to strengthening U. S.-Ukrainian ties and furthering long-held U.S. foreign policy goals in the region, or we could do as President Trump directed and talk to Mr. Giuliani to address the President’s concerns.” So they decided to talk to Trump’s top henchman.

When Sondland checked in with Giuliani, he testified, “Giuliani emphasized that the President wanted a public statement from President Zelensky committing Ukraine to look into anti-corruption issues” and “specifically mentioned the 2016 election, including the DNC server, and Burisma as two anti corruption investigatory topics of importance for the President.”

Freeze the frame: top US officials want to help Ukraine win phone and face time with Trump; Trump essentially says, you gotta talk to Rudy first; and Giuliani says no meeting without Zelensky launching an investigations to produce material that supports a crazy conspiracy theory that holds the Russians did not hack the Democrats during the 2016 election and to uncover information on a company whose board included former Vice President Joe Biden’s son, Hunter.

This is all happening months before Trump orders the withholding of military funding for Ukraine. But it’s a straightforward message from Trump: the United States will not build a productive relationship with Zelensky unless he does what Giuliani demands—and this demand has nothing to do with foreign policy or with corruption in Ukraine.  Giuliani, as Sondland described it, was Trump’s bag man, as the quid pro quo—or call it extortion—plot was hatched. “The key to changing the President’s mind on Ukraine was Mr. Giuliani,” Sondland testified.

Sondland and Volker’s overlapping testimony that they took direction from Giuliani because Trump ordered them to do so obliterates Giuliani’s claim that he was no rogue player and was acting at the State Department’s behest. That’s been his cover story: it was all on the up and up because Foggy Bottom asked me to get involved in this Ukrainian business. In late September, the former New York City mayor cited text messages from Volker in asserting that he had not improperly interfered with US foreign policy. “If State was so upset and nervous about me why would they ask me to meet with [Andriy Yermak, a Zelensky deputy]?” he wrote in a text message to Mother Jones.

Asked if he thought the officials had come to him on their own accord or at Trump’s command, Giuliani wrote, “Since they presented it to me, it seemed like it was their idea. I don’t remember anything to the contrary.” Giuliani’s account is basically that he did the State Department a favor when Sondland and the others came to him for assistance. That sure is not how Sondland and Volker depicted it: Giuliani was Trump’s button man, and they were forced to deal with him.

Giuliani did not respond to a request for comment on Tuesday.

Something else of interest happened at that May 23 meeting. As Sondland, Perry, and others tried to make the point that Zelensky could be a good partner for Washington, Trump kept repeating, “They tried to take me down.” This apparently was a reference to Ukrainians and the aforementioned conspiracy theory that claims Ukrainian officials helped concoct the hoax that Russia attacked the 2016 election and schemed against Trump by investigating Paul Manafort, his campaign manager (who had once made millions working as a consultant for a corrupt Ukrainian president). So not only was Trump looking to withhold US favor to force the Ukrainians to assist him politically; he was seeking vengeance. And Giuliani would be his avenging angel.

There are a lot of complications to the Trump-Ukrainian scandal. Giuliani, for example, had other interests in Ukraine that appeared to bump into those of a controversial oligarch who the Justice Department once called an upper-echelon Russian-organized crime associate (a charge the oligarch denies), and he had two business associates helping him on the Biden front who were involved in their own sketchy business dealings in Ukraine. (And these two guys just happened to be arrested recently and charged with making illegal political contributions to Republicans in the United States.) But Sondland’s testimony—even if it seems carefully designed to distance him from the most explicit aspects of the quid pro quos that occurred—is easy to follow. Trump told the professional diplomats to forget about proper channels and sent them to his freebooting lawyer for instructions, and that loyal lieutenant handed them an underhanded offer they felt they could not refuse.

Asked during his deposition if he raised concerns with anyone about Giuliani’s interference, Sondland responded, “Listen, the State Department was fully aware of the issues, and there was very little they could do about it if the President decided he wanted his lawyer involved.”

Sondland’s testimony contains no new bombshells. But his account confirms the scandal that has already been exposed: Trump designated Giuliani as the architect of this extortion racket in a crass attempt to improperly—and perhaps illegally—exploit his office for political gain. Once upon a time, Trump worked with mobsters to get his casinos going in Atlantic City. And once upon a time, Giuliani was a crusading prosecutor who successfully busted mobsters. Sondland’s testimony offers a tale of the lessons these two New Yorkers learned.