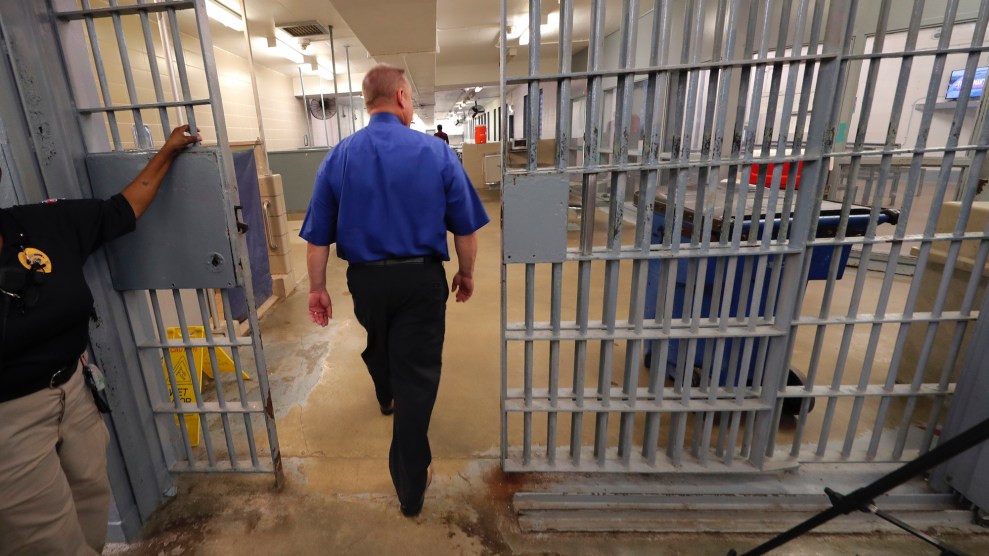 An administrator walks through the Winn Correctional Center, a prison run by LaSalle Corrections that now holds immigration detainees, in September.Gerald Herbert/AP

In June, when Scott Sutterfield became Immigration and Customs Enforcement’s top official in the Deep South, the number of immigrants detained in the region was exploding. Between February and August, ICE started using eight new for-profit detention centers in Louisiana and Mississippi. A few months later, Sutterfield took a new job at the private prison company that runs six of the new jails.

Since September, Sutterfield has been a development executive for LaSalle Corrections, where he is responsible for creating business opportunities for a family-run company whose most important client is his former employer. LaSalle has a thoroughly documented history of negligence leading to the deaths of inmates in its custody. Yet while Sutterfield served as deputy director and then acting director of ICE’s New Orleans field office, which oversees much of the Deep South, his office began sending asylum seekers to six of the company’s jails. As acting director, he signed off on blanket parole denials that kept people in those jails. Now he is working for a company that is profiting from those decisions. His move to LaSalle is among the most egregious examples in a pattern of senior ICE officials taking jobs at the detention companies they were once tasked with holding accountable.

LaSalle is detaining roughly 5,000 people at the six Louisiana jails that ICE has started using this year. The agency is paying about $75 per detainee per day at two of the jails, according to documents obtained through public records requests. That is three times more than what the state of Louisiana pays LaSalle when it holds convicted criminals. If ICE continues to keep 5,000 people at those jails, LaSalle will receive roughly $136 million a year from ICE, compared to $44 million if those beds were filled by Louisiana convicts. (ICE is holding more than 2,500 additional people at LaSalle jails in Arizona, Georgia, and Texas.)

Sutterfield said in an August court declaration that he first started working in federal immigration enforcement in 1987. In 2010, he became the deputy director for ICE’s New Orleans field office, which oversees Alabama, Arkansas, Louisiana, Mississippi, and Tennessee. In 2018, ICE’s New Orleans office was responsible for about 2,400 detainees. This year, the total has jumped to more than 10,000, far more than in any of ICE’s 23 other field offices.

Sutterfield was directly involved in ICE’s expansion into LaSalle jails, according to a former ICE official; it was Sutterfield who suggested to ICE leadership that it consider using some of the LaSalle facilities. The former official says LaSalle’s jails were attractive to ICE because they were cheap and could be filled quickly.

LaSalle hasn’t needed to build new jails to handle the influx. Instead, it is using the same facilities that once held Louisiana criminals, who are in shorter supply as a result of laws the state passed to reduce mass incarceration.

In August, Sutterfield began discussing the LaSalle job, according to Kevin Sumrall, LaSalle’s director of operations. It appears that he was still working for ICE at the time: A Justice Department press release indicates that Sutterfield remained at ICE until at least August 23, and on August 31 he signed a letter denying parole to an asylum seeker. Bryan Cox, an ICE spokesman, declined to disclose when Sutterfield left the agency.

“[W]e are blessed to have an employee like Scott with high moral, ethical and Cristian [sic] values,” Sumrall wrote in an email. “I know he was recruited by several companies and we are fortunate that he accepted a position with our company.”

In Louisiana, LaSalle detains mostly asylum seekers who request protection after being taken into custody at the border. Last month, one of those asylum seekers, Roylan Hernandez-Diaz, died at LaSalle’s Richwood Correctional Center by apparent suicide. “Today, it was my husband, but how many have there been before?” his widow, Yarelis Gutierrez, asked at the time. “How many more will there be if we don’t get this under control?”

The morning after Hernandez died, a Honduran asylum seeker attempted suicide after being separated from the jail’s general population for months in solitary confinement and then a two-person cell. They were not isolated incidents. Before ICE signed the new agreements in Louisiana, LaSalle was repeatedly faulted for failing to adequately supervise suicidal detainees. In light of the speed of the expansion and the number of qualified medical professions in rural Louisiana, the former ICE official says, “I’m surprised more people haven’t died.”

As I reported in July, sending detainees to the Deep South is part of President Donald Trump’s effort to make it impossible for people to receive asylum after crossing the border:

Concentrating asylum seekers in Southern states makes it particularly likely that they will lose their cases because of the region’s harsh judges and shortage of immigration lawyers. There are not enough judges in Louisiana to hear the new cases, and there are no immigration courts in Mississippi. As a result, many of these new asylum seekers will be forced to represent themselves in video hearings with out-of-state judges.

Back in 1987, Sutterfield’s first year in immigration enforcement, more than 1,000 Cuban detainees took over a Louisiana detention center where they’d been detained indefinitely. Sutterfield, who was 21 at the time, was held hostage for eight days. He called it a “very rough time” in a 1987 interview, but he said the Cubans treated guards well. “They had a legitimate cause,” Sutterfield said. The stalemate was resolved after the government agreed to provide the Cubans with a “full, fair, and equitable” review to determine whether they could be released on parole. “It’s hard to say whether I could work with [Cuban inmates] again,” Sutterfield said the next year. “I’d have to give it a try.”

Earlier this year, ICE’s New Orleans office achieved the distinction of being the only field office to deny parole to 100 percent of asylum seekers. In September, a federal judge ordered ICE to return to following its own parole policy, which requires it to release people who do not pose a threat to public safety or a flight risk. Immigration attorneys who represent clients detained in Louisiana say they’ve seen no evidence ICE is following the judge’s orders.