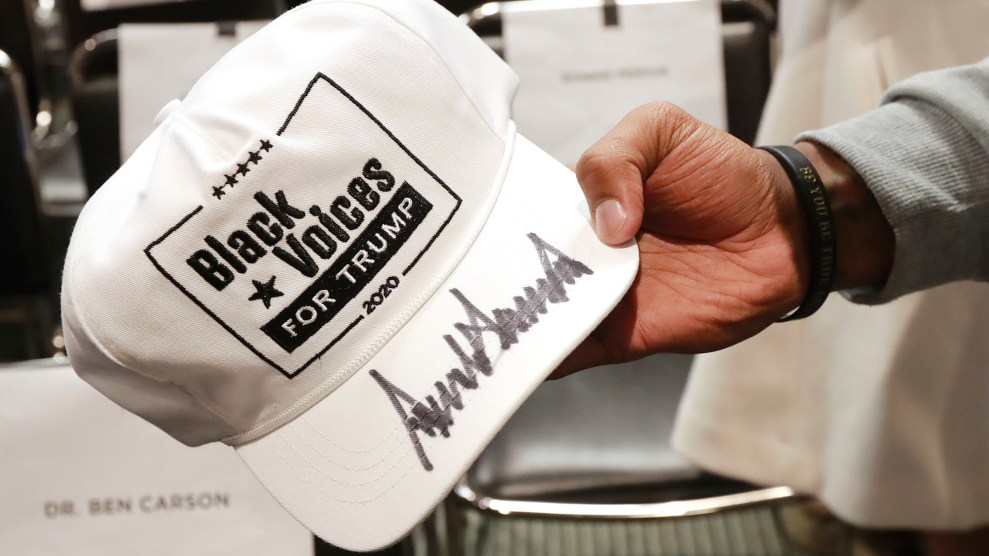 Last week, President Donald Trump went to Atlanta and with much fanfare announced that his re-election campaign was launching a coalition that would convince Black people that they should reelect him in 2020. He cited the unemployment rate and the First Step Act, legislation that aimed to reduce the sentences of certain incarcerated people (but it has been criticized because the Department of Justice is trying to put newly released people back behind bars). The Black Voices for Trump Coalition began with a rally in a hotel that featured speeches from Vice President Mike Pence and Department of Housing and Urban Development Secretary Ben Carson before Trump’s hour-long speech—but not much else. No spokesperson appeared as the leader of this new movement.

After some searching on Facebook, I sent an email to blackvoices@donaldjtrump.com asking who was involved in the coalition, and how they planned on reaching out to voters. But it went went unanswered. The Trump campaign advised the public on Twitter to text “WOKE” to 88022 to learn more, but after I did that, I was automatically added to a campaign list. Was I ever going to be able to know who the members of the coalition even were?

Late Tuesday night, Katrina Pierson, who is a Black former tea party leader and now senior adviser to Trump, tweeted out the official website, which answered my questions. “Black Voices for Trump will encourage the black community to re-elect President Donald J. Trump by sharing experiences and successes of everyday people as a result of the Trump administration,” the otherwise sparse website explains. Beneath this description is a list of the 35 people who will serve as magnets, bringing the African American community to the polls for Trump and erasing any memories they may have of his racism. Absent from the list, probably because the Hatch Act  forbids campaign involvement by those who work in government, are notable Trump political appointees Ben Carson and Lynne Patton.

Instead, topping the list is Herman Cain, who is listed as a co-chair. Cain, like the president, was first a successful business man. He served as an executive of Godfather Pizza from 1986-1996. He first entered the national spotlight in 2011 with hopes of challenging President Barack Obama, and he announced he would run in the Republican primary. He unintentionally served as comic relief during the 2012 campaign with some notable gaffes. During an interview with the Christian Broadcasting Network, he referred to Uzebkistan as “Ubeki-beki-beki-beki-stan-stan.” But things took a darker turn when multiple women who had worked with him accused him of sexual harassment. He denied the claims but suspended his candidacy in December 2011 seven months after it began.

Cain as a presidential hopeful may have become a faded memory, but still exists in the form of this awkward smiling gif.

But in April, Trump told reporters  that the former pizza executive was “the man” for the vacant seat on the Federal Reserve Board, the body that oversees the US Central Bank. Critics immediately asked if Cain, who is deeply conservative, could hold a job that has traditionally been non-partisan, not to mention the still-lingering sexual harassment scandals from his presidential campaign. If Cain were officially nominated, he’d have to pass a background check and sit through a potentially grueling Senate confirmation hearing. Three weeks after Trump floated his name, Cain withdrew, saying taking the job would require him to take a pay cut.

Among Cain’s fellow co-chairs are YouTube stars, Fox commentators, and ardent Trump fans Diamond and Silk. In July 2016, the pair posted a video criticizing Megyn Kelly for her questions challenging then-candidate Trump at the Republican primary debate, and the video went viral. They had begun supporting Trump in late 2015 after being lifelong Democrats and concluding that Hillary Clinton’s overtures to Black people were insincere. Their weekly show on Fox News’ streaming component is spent praising the president, calling Sen. Bernie Sanders (I-Vt.) socialist, and criticizing Rep. Alexandria Ocasio-Cortez (D-N.Y.).

In order to appeal to Black voters, there should be a religious element, and Pastor Darrell Scott checks that box. He founded the New Spirit Revival Center, which describes itself as a “Bible-based, Non-Denominational church with a Pentecostal/Charismatic persuasion” in Cleveland Heights, Ohio. He met the president in 2011, when Trump was first considering a presidential run. Scott is really excited about the coalition, even going on Twitter to sarcastically question the Black support of some Democratic candidates. (Scott had apparently forgotten that Beto O’Rourke dropped out of the presidential race on November 1.)

The list has the usual suspects, the same prominent Black people who vocally support the Republican party, like Alveda King, Dr. Martin Luther King Jr.’s niece, who was a early supporter of Herman Cain, and Stacey Dash, the actor most known for her role as Dionne in the 1996 movie Clueless and for her public support of Mitt Romney in 2012. But then I saw the names Keith and Kevin Hodges and wondered who they were. It turns out the twin brothers are comedians, podcasters, and YouTube stars. They don’t appear to have any political experience, and their social media presence is a confusing mix of comedy, conservative commentary, fitness, and food videos.

The food videos about various fast food franchises are an improvement over their previous Instagram offerings, which were dominated by videos depicting them reading alleged emails asking for advice about what to do when you get an ugly woman pregnant (subscribe to their paid website to find out) or what to do if your boyfriend is incarcerated (dump him). Today, their more sedate account looks more like a mouthpiece for Fox News, with videos about how guns and Donald Trump are both great. Their YouTube channel, named TwinMuscle, consists of dozens of videos of the twins eating fast food like Chik-Fil-A and Taco Bell. I reached out to their agent to learn more about how they became involved with Black Voters for Trump, and what they hope to achieve. I have not yet received a response to my request for comment.

In 2016, Donald Trump insisted he’d get 95 percent of the Black vote in 2020. But even if he just wants more than the 8 percent he received last time, it’s unclear how this coalition of failed presidential candidates, C-list celebrities, and opportunistic pastors will help.