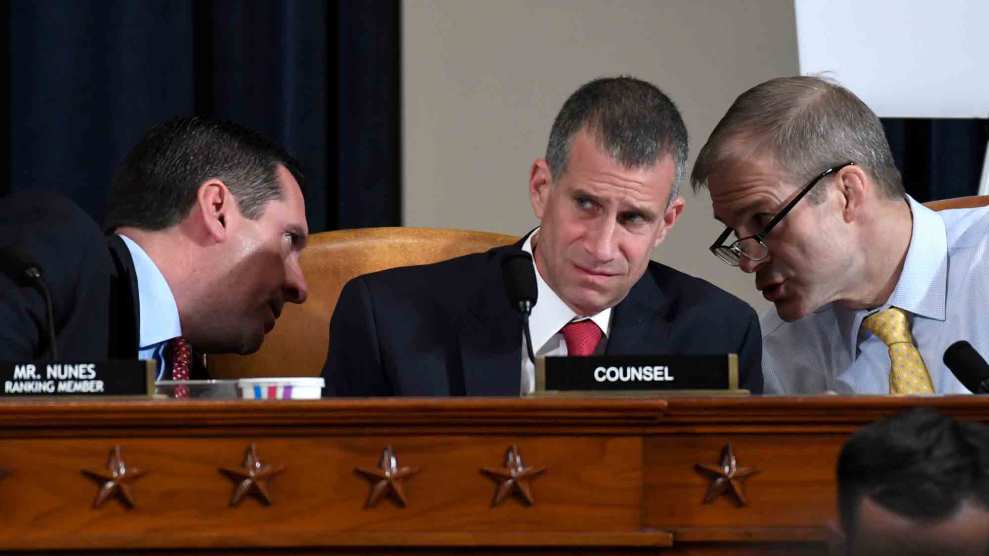 The House impeachment inquiry is focused on whether President Donald Trump abused his office to pressure Ukrainian President Volodymyr Zelensky to dig up political dirt for Trump’s personal benefit. But it also raises a much larger question: Does reality matter? That was clear at the first public impeachment hearing conducted by the House Intelligence Committee on Wednesday.

The main attraction was the testimony of Bill Taylor, the acting ambassador to Ukraine, and George Kent, the deputy assistant secretary of state for European and Eurasian affairs. In long opening statements, they each laid out a clear—and now familiar—narrative: Trump established what Taylor called an “irregular channel” to shape the US government’s Ukraine policy and set up an extortive quid pro quo. The deal was this: The White House meeting that the newly elected Zelensky sought with Trump would not happen and nearly $400 million in US security assistance to Ukraine would be withheld unless Zelensky publicly announced he was launching investigations to probe Joe Biden and his son Hunter, who served on the board of a Ukrainian energy company, and to examine supposed Ukrainian meddling in the 2016 campaign.

Taylor and Kent came across as sober professionals. They each explained they were nonpartisan career public servants and spoke calmly in a just-the-facts manner. Taylor painstakingly walked the committee through the chronology of the Ukraine scandal. And he provided a new bombshell: One of his staffers had overheard Trump call Gordon Sondland, the ambassador to the European Union and a key player in the “irregular channel,” and say that his top concern regarding Ukraine was prompting a Biden investigation—that is, not US-Ukraine policy. This diplomatic duo offered a strong and compelling case by merely reporting what they had seen and heard.

Yet nothing they said altered the altered reality of the Republicans. In fact, the committee’s GOP members spent much of the day trying to sidestep the core facts of the controversy and replace them with conspiracy hogwash to divert attention from the incriminating evidence. Rep. Devin Nunes (R-Calif.), the senior Republican on the committee, set the table with an opening statement that was a stream-of-consciousness collection of FoxWorld buzzwords: Russia hoax, Steele dossier, Ukrainian meddling, the whistleblower. He claimed the impeachment process was itself a conspiracy mounted by the Democrats in a “cultlike” manner within a “star chamber” atmosphere. And going even further, Nunes denounced the FBI, “elements of the Justice Department,” and “now the State Department” for plotting against Trump. He was essentially accusing Taylor and Kent of joining the never-ending deep state scheme to destroy Trump. (At about the same moment, Trump sent out a fundraising email that claimed that Wednesday’s impeachment proceeding was a “Scam” and “a complete Fake Hearing (trial) to interview Never Trumpers.” Neither Taylor nor Kent are Never Trumpers, and Trump’s attempt to demonize independent witnesses in an investigation as partisan foes is the move of an authoritarian.

Then came the particulars. In their questioning of witnesses, Republicans tried to build an alternative reality. Rep. Jim Jordan (R-Ohio) loudly exclaimed there could be no quid pro quo because eventually the Trump White House did release the security assistance for Ukraine. (The White House did this after it learned the whistleblower had complained that Trump had extorted Zelensky. And Jordan conveniently did not address the first pressure point: the White House meeting.) Jordan and Nunes also fulminated about Zelensky’s public insistence that he was not “blackmailed” by Trump. (Kent said it was a “fair assessment” to note that Zelensky, who still depends on the Trump administration for crucial assistance, is in no position to contradict Trump.) Several Republican members asserted that Trump was justified in urging Kiev to deal with corruption and referred to innuendos about the Bidens. (Kent said that Joe Biden had been acting in accordance with official US policy in his dealings with Ukraine and that there was no factual basis for the allegations of wrongdoing.)

To pull all this off, the Republicans had to engage in heavy-duty denial. They claimed the July 25 phone call between Trump and Zelensky—in which Trump responded to the Ukrainian’s request for Javelin anti-tank missiles with a request for these political investigations—was fine. It was, Nunes said, a “pleasant exchange between two leaders.” Steve Castor, the top GOP lawyer on the committee, tried to downplay the significance of the “irregular channel,” observing that it might “be irregular but it’s not outlandish.” Many people in the committee room snickered at that. The Republicans ignored the bombshell that Taylor delivered about a staffer overhearing Trump say he only really cared about ginning up a Biden probe. They ignored the testimony about Ukrainian officials fretting over how to respond to Trump’s muscling. They ignored the testimony that Zelensky was about to cave and announce the investigations that Trump demanded just before the security assistance was delivered. Both Kent and Taylor said they believed Trump was pursuing his own political interests—not US foreign policy interests—in this episode. The Republicans ignored that, too.

At this opening day, the Democrats’ stuck to their script, presenting fact-based witnesses who ably and dispassionately told their stories, presenting an account that the public can evaluate. The Democrats aim to tell a simple tale of obvious Trump wrongdoing. Republicans cannot abide by that. After all, the known facts are not on Trump’s side. So their big play is to deride the whole damn thing and say to the Democrats, you’re the ones abusing your power. Toward the end of the hearing, Jordan called special counsel Robert Mueller’s investigation a fraud—yep, just a plot against Trump waged by you-know-who—and he complained the Ukraine investigation was nothing but a continuation of that effort. And Nunes described the notion that Trump pressured Zelensky for political investigations as “one of the mother of all conspiracy theories.” He was flipping reality, using false conspiracy theories to claim that the reality is actually a conspiracy theory. The Republican performance was hardly surprising. In some ways, they were less obstructive and more subdued than Democrats on the committee had expected. They griped about Rep. Adam Schiff (D-Calif.), the committee chair, turning down their request to call the whistleblower as a witness, but there were no stunts. The hearing, though, was yet another demonstration of their blind loyalty to Trump and their now all-too-familiar embrace of a dangerous and demagogic tactic: smothering rationality with paranoia.