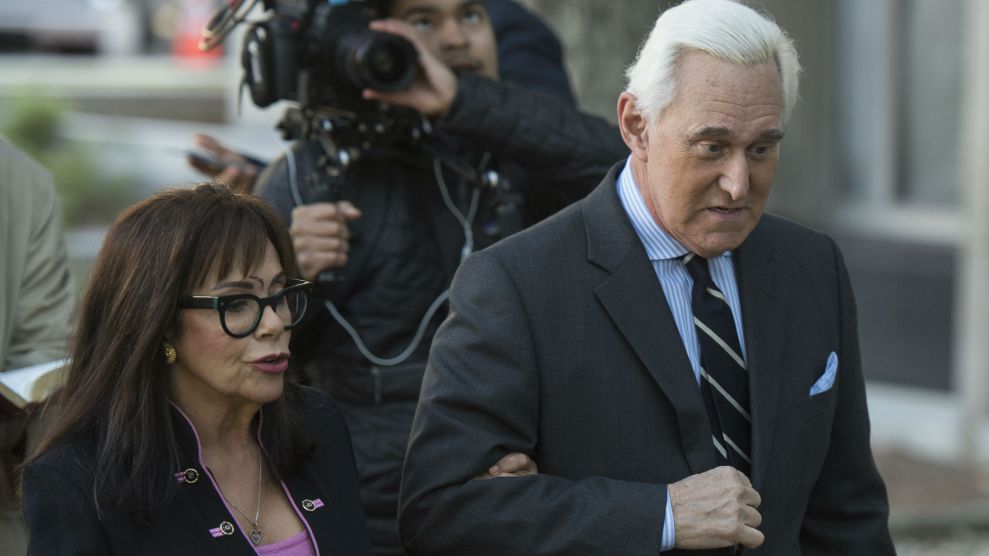 Roger Stone and his wife Nydia arrive at Federal Court for the second day of jury selection for his federal trial on Wednesday, Nov. 6, 2019.Cliff Owen/AP Photo

Roger Stone is on trial, and the proceedings are bad news for President Donald Trump, with federal prosecutors citing evidence that suggests Trump might have lied to Special Counsel Robert Mueller. And that sort of lying can be a crime.

The trial kicked off on Wednesday at a federal courthouse in Washington, DC, with a bit of a circus atmosphere. The neo-fascist Proud Boys were there, as well as other luminaries of the alt-right, to support Stone, the dirty trickster and conspiracy theorist who has been a Trump adviser since the 1980s. Facing seven felony counts, Stone is charged with lying repeatedly to the House Intelligence Committee, obstructing justice, and witness tampering. But this case goes beyond Stone’s alleged lies: prosecutors have revealed new information about how Trump tried to benefit from the Russian operation during the 2016 campaign that hacked the Democratic National Committee’s servers. And they are producing material undercutting Trump’s claim to Mueller that he has no recollection of talking to Stone during the campaign about WikiLeaks. This information also presents a new wrinkle in the Trump-Russia scandal: Trump might have thought in 2016 that his campaign, in effect, was colluding with WikiLeaks. That’s because the campaign was communicating with Stone about WikiLeaks’ plans and intentions and campaign officials (and perhaps Trump) believed Stone was in contact with WikiLeaks.

One of the key points Mueller investigated was whether the Trump campaign had interacted with WikiLeaks or Russian intermediaries in 2016 when Moscow was using WikiLeaks for its operation to subvert the US presidential campaign (which was mounted in part to help Trump win). Trump refused to be questioned in person by Mueller and his investigators. Instead, he agreed to answer written questions on a limited number of subjects. Several of the queries Mueller submitted to Trump focused on whether he was ever told Stone had been in touch with WikiLeaks and whether he or anyone associated with his campaign had spoken to Stone about WikiLeaks. In his written response, Trump replied, “I do not recall being told during the campaign that Roger Stone or anyone associated with my campaign had discussions with any of the entities named in the question regarding the content or timing of release of hacked emails.” He also noted, “I do not recall discussing WikiLeaks with [Stone], nor do I recall being aware of Mr. Stone having discussed WikiLeaks with individuals associated with my campaign.” And Trump, who has boasted of possessing a prodigious memory, claimed to have “no recollection of the specifics of any conversations I had with Mr. Stone between June 1, 2016” and Election Day. The impression Trump provided: as far as he knew, he and his campaign had had nothing to do with Stone and WikiLeaks.

On June 14, 2016, the Washington Post reported that the DNC had been hacked by Russia. On that same day, Zelinsky said, Stone, an unofficial campaign adviser, spoke by phone with Trump. Zelinsky also cited another suspicious call. This occurred on July 31, 2016—not too long after WikiLeaks had at the start of the Democrats’ convention released thousands of DNC emails and documents stolen by the Russians. Stone phoned Trump and the two men spoke for about 10 minutes. Prosecutors don’t know what the men discussed, according to Zelinsky, but about an hour later, Stone emailed Jerome Corsi, a right-wing conspiracy theorist who was helping Stone’s efforts to attack Hillary Clinton. Stone instructed Corsi to travel to London and “get to” Julian Assange, the WikiLeaks founder who was holed up in the Ecuadorian embassy to avoid arrest by British authorities.

Corsi has since claimed that he did not speak to Assange or anyone connected to WikiLeaks. Yet on August 2, Corsi emailed Stone, “Word is friend in embassy plans 2 more dumps. One shortly after I’m back. 2nd in Oct. Impact planned to be very damaging.” The next day, Stone emailed his former lobbying partner Paul Manafort, who at this point was the Trump campaign’s chairman. Stone, according to Zelinsky, told Manafort he had an idea “to save Trump’s ass,” and he asked Manafort to call him.

Stone later emailed Trump campaign CEO Steve Bannon, who joined the Trump campaign after Manafort’s mid-August ouster, and asserted that time was running out for Trump to salvage his candidacy. Stone said in this message, sent on August 18, that he knew how to win the election “but it ain’t pretty.” Bannon wrote back, in part: Let’s talk ASAP.” Zelinsky told the court that Bannon will testify that he and Stone “had been talking all summer long” about WikiLeaks and that Stone had told Bannon what he had been claiming publicly: that he had inside information on WikiLeaks. (Stone now insists he had been lying and possessed no inside connection to WikiLeaks.) In October 2016, when Assange gave a bizarre press conference widely seen as a dud because he did not disclose new material on Hillary Clinton, Bannon immediately emailed Stone to ask, “What was that?” Stone assured Bannon that Assange still planned to release additional emails. And days later, WikiLeaks began releasing messages the Russians had swiped from Clinton campaign chief John Podesta. Trump touted those releases extensively in the final weeks of campaign, declaring, “I love WikiLeaks.”

The story that Zelinsky began telling at the start of the trial raised the possibility (or probability) that Trump and his campaign did interact with Stone regarding the WikiLeaks releases of stolen Democratic documents—and that they considered Stone a backchannel to Assange and his organization. (It remains an open question whether Stone had indeed obtained inside information on WikiLeak’s plans. Stone’s lawyers argued Wednesday that he only was sharing information that was already public.) Yet Trump told Mueller he had no memory of him or anyone else connected to his campaign communicating with Stone about WikiLeaks. That seems hard to believe. Lying to Mueller could be a crime—similar to the crime that Stone has been charged with. And though Mueller noted in his final report that a sitting president cannot be prosecuted on a federal charge, he did indicate that a president could be prosecuted once he or she leaves office.

The Stone trial is expected to last several days, and it may well continue to produce information that, as Zelinsky said, looks “bad for Donald Trump.”