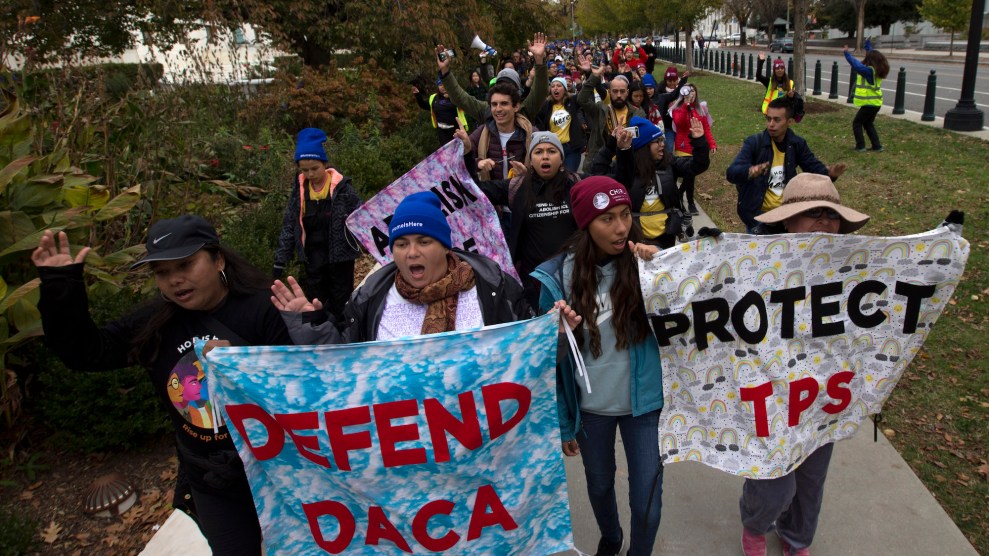 Demonstrators arrive in front of the Supreme Court on Sunday after marching from New York City in support of Deferred Action for Childhood Arrivals and temporary protected status.Jose Luis Magana/Getty

The Supreme Court will hear oral arguments Tuesday in the case that will decide whether the Trump administration violated the law when it stripped undocumented immigrants who came to the United States as children of their protections against deportation. But the justices’ decision could wind up having little impact on the roughly 700,000 immigrants, known as Dreamers, whose lives President Donald Trump has tried to upend.

Instead, the winner of the next presidential election may be the one who decides whether Dreamers—along with another about 300,000 people with temporary legal status—face possible deportation. For roughly 1 million undocumented immigrants, what happens in 2020 could wind up being more important than what happened in 2016.

It is not disputed that the Trump administration has the authority to end Deferred Action for Childhood Arrivals (DACA)—the Obama-era policy that protects Dreamers—since it’s an executive action, not a law passed by Congress. The legal argument against Trump’s 2017 move to end DACA is that the decision violated the law because it was made in an “arbitrary and capricious” manner. Lower courts and the progressive Ninth Circuit Court of Appeals have agreed with that position, forcing the Trump administration to keep DACA on life support. More than 660,000 people are still protected by DACA as a result.

The Supreme Court isn’t expected to issue a decision in the case until 2020, meaning that DACA recipients who renew their two-year work permits before a ruling is issued could retain their DACA status well into 2022. A Democratic president could reinstate the program long before then, even if the court rules that Trump’s DACA decision was legal.

Immigrants with temporary protected status—a protection granted to people in the United States whose countries are affected by war or natural disasters—face a similar predicament. The Trump administration has tried to end those protections for six countries, but it’s been blocked in court, leaving roughly 300,000 immigrants—the majority of whom have been in the United States for roughly two decades—with work permits until at least January 2020. A new administration could quickly reverse Trump’s TPS decisions before those people have been deported. It’s entirely possible that DACA recipients and TPS holders, two of the administration’s biggest and most obvious targets, could escape a Trump presidency without losing protections against deportation. (The attempts to end those protections, however, have caused psychological distress and turmoil as immigrants wonder whether they’ll be able to stay in the United States.)

But there is one big caveat in the DACA case. As Vox points out, Trump’s Justice Department is arguing that the whole policy is illegal. Most of the debate around DACA so far, including in the lower courts, has been over whether the administration made an arbitrary and capricious decision, and the Supreme Court could well rule on that narrow question, but it doesn’t have to. The five conservative justices could instead find that the Obama administration didn’t have the authority to protect hundreds of thousands of undocumented immigrants through executive action. A Democratic president would then be blocked from reviving DACA.

Such a sweeping decision would highlight what may be the most profound legacy of the 2016 election on a wide array of issues, including immigration: not the administration’s executive actions, but its appointment of Neil Gorsuch and Brett Kavanaugh to the Supreme Court.