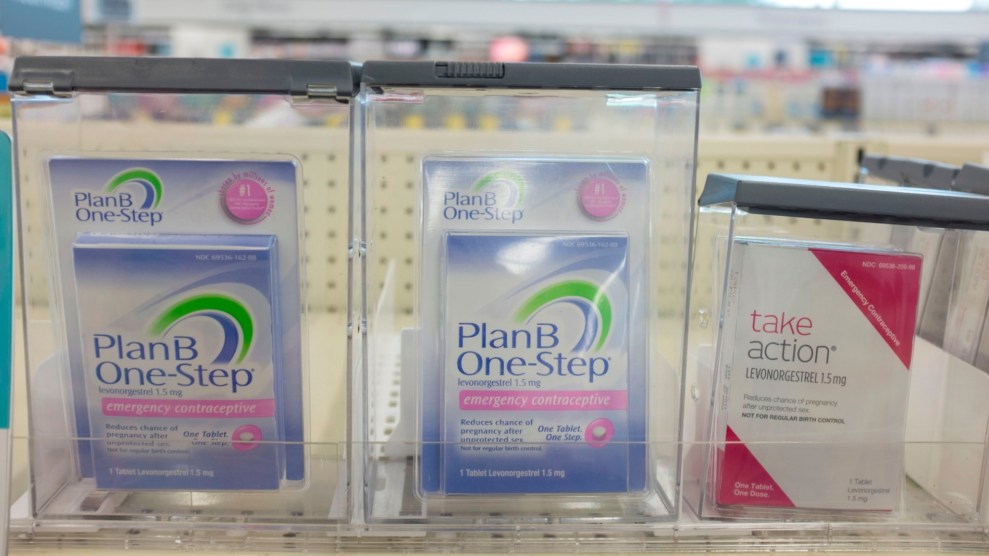 Plan B sits on a shelf in a pharmacy in Montgomery, Alabama.Seth Herald/AFP via Getty Images

In the spring of 2017, Emma Donnelly, a junior at the University of Southern Maine, read an article that inspired her to take action. Students at the University of California, Davis, had organized to get a vending machine on their campus that sold emergency contraceptives for half of what they cost at a typical drug store. To Donnelly, this seemed like a simple solution to a persistent problem on college campuses: how to get convenient, discreet, and affordable access to a potentially life-altering product. What she didn’t know was that bringing one of these machines to her school would take two years, a surprise farmers market encounter, a major legislative battle, and a new state law with far-reaching impacts for health care across the state of Maine.

Students can also purchase emergency contraceptives from local drug stores. The main USM campus, in Portland, has two stores within walking distance, and the Gorham campus, where Donnelly was enrolled, has one, but none of them is open 24/7. For students who need immediate emergency contraception, the nearest 24-hour store is 42 miles from Portland and 37 miles from Gorham. And the costs at all of these stores can be a barrier. The average price of an emergency contraceptive at CVS and Walgreens, the two major retailers in the area, is between $40 and $50. Students who can’t afford these prices or access these stores are forced to wait, in a situation where every hour counts.

Donnelly was particularly concerned about finding a way for victims of sexual assault to gain easy and anonymous access to emergency contraceptives. According to the National Sexual Violence Resource Center, 1 in 5 women is sexually assaulted while in college. But victims who want emergency contraceptives are often deterred from getting them by logistical and privacy challenges. A 2018 report by the American Society for Emergency Contraception (ASEC) found that only 60 percent of drug stores in the United States stock emergency contraceptives on the shelves. Of those stores, 57 percent lock the product in a case that requires store employees to open it. Many stores also ask for identification to purchase emergency contraceptives, even though in 2014, Plan B and its generic counterparts were approved by the FDA for all age groups without requiring identification. This process can make many people feel as if they are being recorded or purchasing something elicit. “For someone who’s experiencing stress or potentially trauma, [this process] is actually a really big barrier,” explains Kelly Cleland, a Princeton researcher and coordinator for ASEC.

She didn’t know that bringing one of these machines to her school would take two years, a surprise farmers market encounter, a major legislative battle, and a new state law.

When Donnelly first went about trying to get the emergency contraceptive vending machines on campus, she figured it would be a straightforward process. She spoke to her director of health services, who immediately embraced the idea. Then they ran into a problem: It was illegal in Maine to sell emergency contraceptives in vending machines, due to a set of obscure 1930s laws that blocked the sale of any over-the-counter medications in vending machines. “I didn’t think by any stretch of the imagination that it would ever be illegal,” recalls Donnelly. At least three states expressly prohibit vending-machine sales of over-the-counter products, and five others prohibit them unless there is an exception from a regulatory body. Before Donnelly could get her school administration on board, she would have to go to the state capitol.

But the push actually began with a chance encounter at a local farmers market in Gorham. Maine state Rep. Maureen Terry, who represents most of USM, was selling her homemade granola when Donnelly, a member of the student council, was doing her weekly community outreach. They got to talking about vending machines, and Terry says she was instantly convinced to support legislation to change the vending machine law. “I thought for sure it would be a no-brainer,” says Terry.

However, as the nearly 15-year battle to get Plan B and its successor Plan B One-Step approved for over-the-counter usage illustrates, nothing is a no-brainer when it comes to emergency contraception. One of Terry’s colleagues told her “a bill about women’s reproductive rights is not something that [he was] interested in,” she says. Other state lawmakers, she says, repeated common misconceptions around emergency contraception, such as the idea that they can cause abortions. (In fact, emergency contraceptives prevent fertilization of an egg, whereas abortion medications are used after fertilization and implantation.)

But Terry, a mother of three daughters, persisted, and in January she introduced LD 37—”An Act To Allow for the Sale of Nonprescription Drugs through Vending Machines”—in the legislature. Two months earlier, Maine had elected its first female governor, Janet Mills, who was much more sympathetic to reproductive health care issues than her predecessor, Paul LePage. Despite testimony from anti-abortion activists claiming that the legislations would endanger children and provide on-demand abortions, Mills signed it in June.

But Cleland is aware of only 13 colleges that have emergency contraception vending machines on campus.

At Yale, students ran into the same problem as Donnelly, when they discovered, after voting to install an emergency contraceptive vending machine, that selling over-the-counter medications in vending machines was illegal in Connecticut. Instead the student council moved forward with a “sexual wellness” vending machine, which includes condoms, lubricants, and tampons.

State laws aren’t the only challenges students face in expanding access to emergency contraceptives. When Rachel Samuels, then a student at Stanford University, first tried to get emergency contraceptive vending machines on her campus in 2015, she says she was met with pushback and indifference from college administrators. “It took dozens of meetings and consistent emails even after I graduated for any real progress to take place,” she says. In 2017, three months after she graduated, Stanford placed a vending machine in a gender-neutral bathroom in the student health center, which students can access 24/7. It dispenses emergency contraception for $25.

Samuels says it was worth the fight. At the local CVS, she says, many of her classmates reported feeling judged by pharmacists and said accessing emergency contraception was stressful and embarrassing, particularly for victims of sexual assault.

“Universities need to do better,” says Samuels. “They need to listen to survivors, and they need to work with survivors to make the process better, because right now it’s so hard for survivors, and this is just one tiny thing that hopefully will make it a little bit easier for them.”

Student activists may soon have new tools to navigate the confusing landscape of emergency contraception on campus. Researchers at ASEC and the National Health Law Program, a progressive health care policy organization, have teamed up to create a comprehensive guide for students who want emergency contraceptive vending machines on their campus.

ASEC has worked to connect students at different colleges to talk about the various barriers to getting contraceptive vending machines on campus. Cleland, the ASEC coordinator, has shown students how to navigate state laws and regulations and taught them best practices for mobilizing college administrators. She is working to create a step-by-step guide that will walk students through the process, based on their state and type of campus. Liz McCaman, a staff attorney for the National Health Law Program, is working with colleagues on a database of state laws and regulations regarding the sale of emergency contraceptives in vending machines so students like Donnelly can know the legal challenges before they sit down with administrators.

Donnelly is excited for tools like this to exist. “I think it’s a cool opportunity to be able to collaborate with people from other states, and also to see what other people have been doing and how they went about their project,” she says.