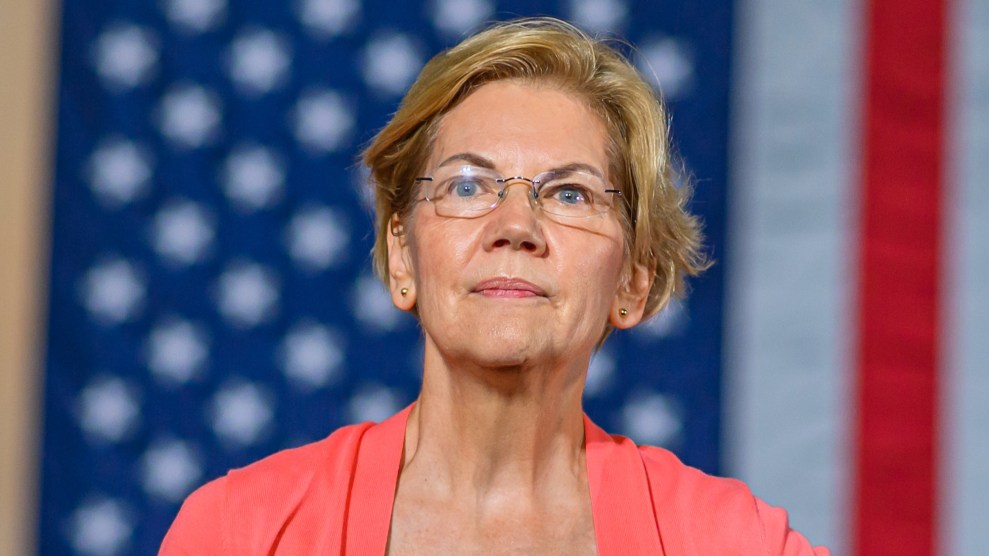 A private memo circulated among investors late last month had a word of caution about a potential Elizabeth Warren presidency: Swiss banks would suffer.

That’s the warning contained in a November 19 report titled “Swiss Banks: Warren Administration Analysis” from the research arm of Barclays, a major London-based bank and international financial services firm. The analysis, obtained by Mother Jones, evaluates six of her marquee finance-focused plans, including her proposals to crack down on corporate wrongdoing and to tax household net wealth greater than $50 million. “Of the European banks, the Swiss may be most impacted by Senator Warren’s plans,” it says. “Most of the plans we look at would have a negative impact.”

A possible Warren presidency has been troubling for Wall Street and the wealthy, especially since she started gaining traction in national and early primary state polls. Last month, Goldman Sachs CEO Lloyd Blankfein warned Warren’s proposals would amount to a “cataclysmic change” to the US economy, while hedge fund billionaire Leon Cooperman told CNBC, “If this lady wins, we’re in big trouble.” The Massachusetts Senator—a personal bankruptcy expert who made her public service debut as a congressional adviser overseeing remediation of the root causes of the 2008 financial crisis—turned the criticism into a kind of endorsement. She hit back with a new “Billionaire Tears” mug in her campaign store and a calculator that illustrates how much her ultra-wealthy critics would pay under the wealth tax.

Barclays’ report is the fourth the group has produced on the potential consequences of her would-be administration. Previous ones have covered the effect it might have on the US credit sector, as well as an explanation of which of her policies could be implemented by executive order—which would mean they could have an immediate impact on the banks. While analyses of presidential candidates and their platforms such as this one are typical, Warren has commanded special attention since her policies are among the most disruptive—plus, she’s popular, holding onto third place in national polls.

The report spells out the potential issues UBS and Credit Suisse, Switzerland’s two most prominent banks, would likely face. Given the heavy investment in the US wealth management business, UBS could be particularly harmed by Warren’s proposed wealth tax, because its growth strategy is aimed at households with more than $100 million in net worth—described in the report as “the segment right in the middle of Senator Warren’s crosshairs.”

UBS could be particularly harmed by Warren’s proposed wealth tax, because its growth strategy is aimed at households with more than $100 million in net worth—described in the report as “the segment right in the middle of Senator Warren’s crosshairs.”

Credit Suisse, meanwhile, could suffer most under Warren’s proposal to scale back the private equity industry, which buys and restructures companies and which Warren has called “legalized looting,” as the report notes. For five of the last seven years, Credit Suisse has been the world leader in the financial sponsors market, a segment of the private equity sector that often engages in “leveraged buyout” transactions that allow investors to acquire companies using a combination of equity and debt—the very sort of transactions Warren would like to see fewer of.

The analysis also takes a look at Warren’s plans to increase fines and penalties for corporate wrongdoing and absolve Puerto Rico of its debt, the result of decades of economic decline, heavy borrowing, and predatory loan practices. Both would potentially spell trouble for UBS, which still has outstanding litigation regarding its role in selling risky mortgage-backed securities during the 2008 financial crisis. As the most prominent participant in the Puerto Rico wealth management industry, UBS was the largest broker-dealer of loans on the island. (The Securities and Exchange Commission fined UBS $34 million in 2015 for its failure to supervise loans there.)

Barclays’ analysts don’t attempt to advise investors on how to vote or predict the outcome of the election, but they do try to evaluate the likelihood of Warren’s plans being enacted under her presidency. While a number of them—such as her proposal to strengthen certain types of leveraged lending—could be achieved without congressional approval, many of her most ambitious ones would require the support of Congress. Barclays’ examines which of her proposed policies would have potentially highest impact on the financial sector and the two that rank the highest are breaking up big banks—Warren calls for banks to separate their commercial arms that manage regular accounts from those that oversee high-risk investment—and canceling student debt.

The analysts offer one note of reassurance: Swiss banks needn’t worry about a potential repeal of the 2017 Tax Cuts and Jobs Act—better known as the Trump Tax Cuts. That’s not, however, because of its benefits to the rich. Though the banks initially viewed the new tax law as a “potential positive” thanks to lower taxation on US profits and greater wealth accumulation among its already wealthy clients, after two years they haven’t seen “a material change” in their tax or investment rates.

None of this, of course, will be any sort of deterrent to Warren, whose message has centered on challenging Wall Street’s influence in Washington. In fact, Warren fired a warning shot against Barclays with a 2012 Washington Post op-ed when she decried its role in the Libor scandal, an international price-fixing scheme in which banks falsely manipulated their interest rates in order to increase their profits and perceptions of creditworthiness. “Barclays padded its bottom line by taking money from everyone else,” she wrote. “It won when it shouldn’t have won—and others lost when they shouldn’t have lost.”

Her concerns about winners and losers has informed her entire presidential campaign. As she wrote in a July Medium post announcing her “economic patriotism” plan—which includes many of the proposals the Barclays’ report evaluates—she was making “a commitment to fundamentally change the government’s approach to the economy so we put American workers and middle-class prosperity ahead of multinational profits and Wall Street bonuses.”