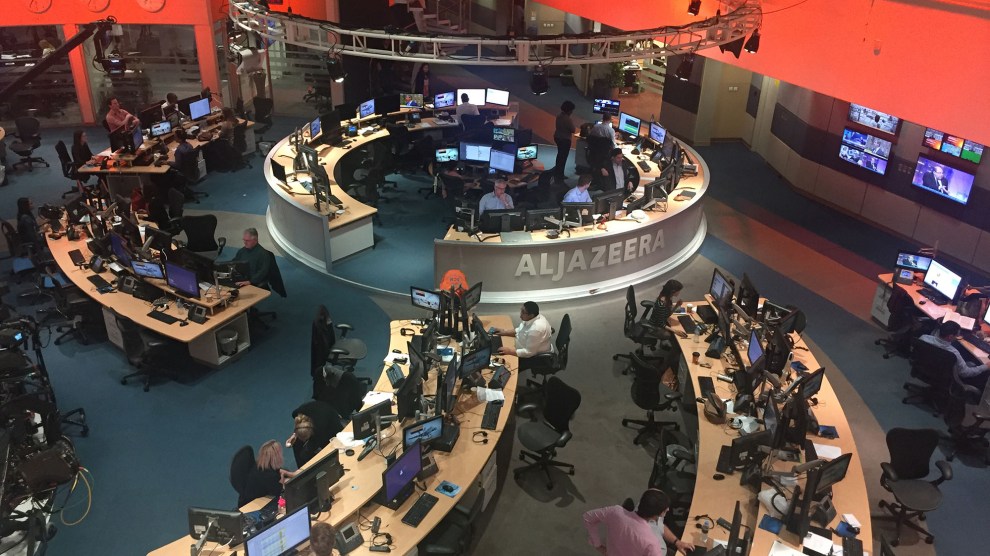 On October 21, Facebook announced a series of new efforts to stem wide scale disinformation campaigns on its platform ahead of the 2020 elections.

The measures announced that day included increased protections for elected officials and campaigns, clearer fact-checking labels, and investing $2 million to support media literacy. Less noticed was a pledge that it would begin to identify pages and content produced by outlets it has determined are state-controlled.

While the proposal seemed straightforward enough—after all, people should know when they’re looking at government propaganda—the case of Al Jazeera is forcing Facebook to take sides in a bitter geopolitical fracas involving disinformation campaigns, hacking-and-leaking operations, and a sprawling blockade.

Al Jazeera rejects claims it is “a voice of the Qatari government. We are clearly not.”

Shortly after the company’s October announcement, Michael Weaver, a senior executive at Al Jazeera in charge of a variety of the news organization’s digital efforts and business development, was at a Facebook conference when another attendee warned him the outlet was likely to have its content labeled on the platform as being the product of “state-controlled” media due to the fact that it is partially funded by the Qatari government.

Those organizations are each described as a “public broadcast service” by YouTube in disclaimers under their videos. A similar notice now displayed under Al Jazeera content notes the outlet “is funded in whole or in part by the Qatari government.”

Where Weaver and Al Jazeera take significant issue is that Facebook’s new label, and its word control, would suggest that “we are a voice of the Qatari government, which we are clearly not.”

When asked about Al Jazeera’s concerns and the delays in rolling out the proposal, which had been expected in early December, a Facebook spokesperson told Mother Jones that the company remained “committed to labeling these pages” and would start with an initial group, adding others “on a rolling basis.”

“We are continuing to work with publishers and third party experts on this issue to ensure that we get this right,” the spokesperson said. When Facebook announced the proposal in October, the company said it would apply the label to “media outlets that are wholly or partially under the editorial control of their government as state-controlled media.” The company said it was working with representatives of more than 40 international organizations from the worlds of media, governance, human rights, and development to help create a set of criteria to base such judgments. Facebook said it would make a distinction between “state-controlled” and “public” media, “which we define as any entity that is publicly financed, retains a public service mission and can demonstrate its independent editorial control.”

In November, after learning that the designation could be looming, Al Jazeera provided Facebook with 200 pages of news coverage that could be seen as embarrassing to the Qatari government, including reporting on corruption and unsafe work practices ahead of the country’s hosting of the 2020 World Cup, and favorable content related to LGBTQ+ issues, even as the Qatari government cracks down on gay rights within its own borders. The materials included documents filed with the government of Qatar affirming the outlet’s editorial independence and establishing it as a “private foundation for the public benefit” under Qatari law.

A subsequent letter to a pair of senior Facebook executives from lawyers representing Al Jazeera, first reported by CNN, argued that the designation would label Al Jazeera’s work as “essentially, foreign propaganda.” The letter added that the Foreign Agents Registration Act (FARA) unit within the US Department of Justice requires entities working on behalf of foreign governments, including media outlets, to register, including Russia Today, and the China Global Television Network. So far, Al Jazeera has not been required to register under the rules. “It is plainly inappropriate for Facebook, which lacks the intelligence-gathering resources of DOJ, to seek to effectively assume the FARA Unit’s role,” the lawyers wrote.

In June 2019, a group of conservative members of congress wrote a letter to Attorney General Bill Barr arguing that the Qatari government exercises control over Al Jazeera and asking what the Department of Justice had done to determine whether a FARA registration was necessary. The letter points to coverage that’s allegedly favorable to the Muslim Brotherhood, and other claims that the network tailors its coverage to toe the Qatari-government line. The DOJ did not respond to a request for comment about the letter or any efforts to require Al Jazeera to register as a foreign agent.

Weaver says Al Jazeera still hasn’t heard from Facebook. While he waits, he fears what the label would mean for the network and its journalists.

“Imagine if you’re a reporter and suddenly, you’ve been working for 20 years, in this highly awarded awarded and ethical newsroom and you’re told, ‘Oh, you’re working for essentially a propaganda arm,’ you would most likely pack up your bag and go somewhere else, because it’s going to be damaging to your career.”

In June 2017, Saudi Arabia, the United Arab Emirates, Bahrain, and Egypt cut ties with Qatar over its relationship with Iran, accusing the country of supporting terrorism. The situation turned into a full-fledged blockade, severing all economic and diplomatic links. Saudi Arabia gave Qatar 10 days to meet 13 demands, which included diminished diplomatic relations with Iran, cutting off military cooperation with Turkey, and the full shut down of Al Jazeera and its affiliate stations.

In the ensuing two years, both sides have accused the other of covert illicit activity aimed at harming the other. In March 2018 Mother Jones’ Dan Friedman reported about the regional-wide lobbying war playing out in Washington, D.C., with both sides’ high-priced lobbyists engaging in a messy messaging war. The story included a lawsuit filed by a Republican fundraiser who accused the Qatari government of hacking his emails and leaking them to smear his reputation.

In October 2019, Bloomberg News reported on an apparent UAE influence operation targeting Al Jazeera combining overt means—high-priced lobbyists meeting with congressional staffers to pressure the DOJ to pursue FARA registration—and more covert means, including UAE-run Twitter accounts and websites that tried to hide their connections to the UAE.

In August Facebook and Twitter removed hundreds of accounts linked to Saudi Arabia, the UAE, and Egypt that targeted the Qatari government in an organized influence operation. In October, Al Jazeera asked Facebook to remove the Facebook page and Instagram account for “QatariLeaks,” which was identified by Twitter as being part of a UAE influence operation covertly pushing a pro-Saudi point of view and reinforcing the narrative that Al Jazeera pushes Qatari-government messaging.

A November 5 letter from Al Jazeera to Facebook argued that the accounts were in clear violation of the platform’s policies. According to the letter, Facebook didn’t respond to the request related to the Facebook page, but confirmed the Instagram account complied with its rules. Both accounts were still active at the time of publication. The Facebook spokesperson did not respond to questions about QatariLeaks.

In the letter, Al Jazeera and its legal representatives argue that any Facebook decision to label its content as “state controlled” would be the result of this disinformation effort by Saudi Arabia and the UAE, and would be instantly weaponized by those countries to delegitimize Al Jazeera reporting that can be critical of those governments’ activities.

“If Facebook were to proceed with to label [Al Jazeera] as ‘state-controlled’ based on the lobbying, public relations and propaganda campaigns of foreign nations, it will have allowed itself to be manipulated in achieving the geopolitical goals of these states,” the network’s attorneys wrote.

Weaver says it’s unclear how Facebook is making this decision, or who is making it.

“We have journalists in jail, we have journalists who’ve been killed, we have people who are dedicated to bringing the truth to light,” Weaver says. “To suddenly delegitimize their careers and all of their work going forward is really just a dangerous blow to free press.”

“At best it’s frightening,” he says. “At worst, it’s malicious.”