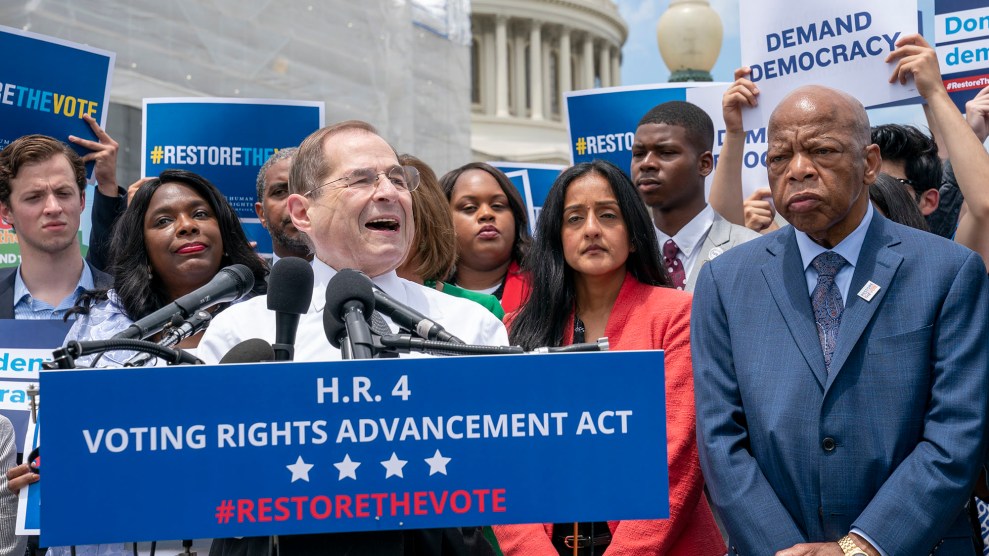 The House of Representatives voted Friday to restore key protections for voters across the country after the Supreme Court gutted the Voting Rights Act in 2013.

In the Shelby County v. Holder decision, five conservative justices ruled that states with a long history of discrimination no longer needed to clear changes to their voting laws or procedures with the federal government. The 1965 Voting Rights Act, they found, was out of date in requiring preclearance for a number of states that had a history of discriminating against minority voters at the time. But the court left the door open for Congress to pass a more current version of the law.

After the Shelby decision, states freed from preclearance passed a wave of voter suppression laws, including strict voter ID laws, aggressive voter purges, and cutbacks to early voting in states such as Georgia, North Carolina, and Texas. In one striking example, the Leadership Conference on Civil Rights found that 1,688 polling places were closed between 2012 and 2018 in states that previously needed federal approval of their election changes under the Voting Rights Act.

“It was just a nightmare we saw across this country,” Rep. Terri Sewell (D-Ala.), the chief sponsor of the legislation that passed Friday—the Voting Rights Advancement Act (VRAA)—told me after the 2018 election. “Our resolve as Democrats is to right the ship, to actually put the enforcement provisions, the teeth, back into the Voting Rights Act.”

As I previously reported, here’s what the bill does:

It would initially cover 11 states: nine in the South, plus California and New York, which have more recently been found to discriminate against Latinos and Asian Americans. The bill would also require all states to get federal approval for election changes that are known to disproportionately affect voters of color, such as strict voter ID laws, tighter voter registration requirements, and polling place closures in areas with large numbers of minority voters.

The House Judiciary Committee and the House Administration Committee held extensive hearings, including in states like Georgia and Texas, to document the need for a renewed Voting Rights Act. The bill passed the House on a largely party-line vote, 228 to 187. Unlike in 2006, when the reauthorization of the Voting Rights Act passed the House by a vote of 390-33, only one House Republican, Brian Fitzpatrick of Pennsylvania, voted for the new bill. Senate Majority Leader Mitch McConnell has already declared his opposition. (McConnell also called a sweeping democracy reform bill passed by House Democrats in March a “power grab” by Democrats.)

Although the VRAA has no chance of becoming law this year, the passage of the bill lays the groundwork for Democrats to make voting rights a major legislative priority should they recapture the Senate and the White House in 2020.