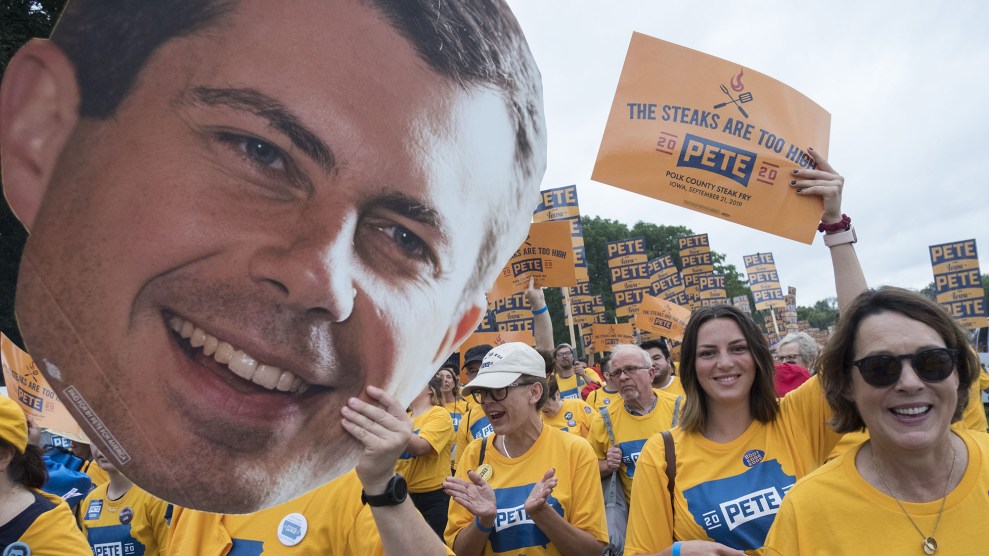 November was a good month to be Pete Buttigieg. After a slow summer, the South Bend mayor stormed into the lead in the first-in-the-nation caucus state of Iowa. His campaign spent $2.8 million on ads in the state this fall, many featuring footage from his lauded address at last month’s Liberty and Justice Celebration—the same party dinner (since renamed) that jumpstarted Barack Obama’s campaign 12 years ago. When the Des Moines Register released its latest Iowa poll a few weeks later, Buttigieg was in first at 25 percent, 10 points ahead of former vice president Joe Biden. And there’s evidence that Buttigieg’s rise has come at Biden’s expense—at Biden events in Iowa, I met voter after voter leaning, at least for the time being, toward the 37-year-old mayor.

But if Buttigieg is going to pull off a historic upset in Iowa, it’ll have less to do with one big speech and more to do with the movement his campaign is building behind the scenes, at house parties and small meetups and in one-on-one conversations initiated by a highly energized corps of volunteers. So on a recent Wednesday evening, I dropped by an organizing meeting at a field office in Ankeny, about 15 minutes north of downtown Des Moines, to see what Pete-mentum looked like on the ground.

“The messenger matters as much as the message, especially for a candidate like Pete, where he doesn’t have the built-in name recognition or the national reputation.”

Every campaign office has some familiar trappings—the turf maps, the canvassing scripts, the pizza, the coffee. But each projects a unique personal style. Elizabeth Warren’s Iowa City office, for instance, has a wall proudly offering printouts of every proposal the Massachusetts Senator had released. (Ask a Warren supporter what they like about her, and there’s a decent chance they’ll say “the plans.”) Buttigieg has plans, too, but not a wall of them. Instead, the Ankeny office displays something called the “Rules of the Road.”

The rules, which Buttigieg unveiled in May, are a set of values that he and his campaign pledge to adhere to—core competencies, as a former McKinsey consultant might say. They are: Respect, Belonging, Truth, Teamwork, Boldness, Responsibility, Substance, Discipline, Excellence, and Joy.

Listen to Tim Murphy describe how Mayor Pete’s campaign is deploying “relational organizing” and what “Pete-mentum” looks like on the ground in Iowa, in this episode of the Mother Jones Podcast:

The 10 rules are ubiquitous throughout Buttigieg’s operation, and have become a code the campaign’s most dedicated backers take to heart. Ask the diehard Pete supporter in your life (based on polls, you probably know at least one) to name a rule and they probably can. In tiny Swaledale (population 158), Katie Koehler, a retired public school teacher and Buttigieg supporter, brought the rules up unprompted when I asked her what she thought about her Republican congressman, the white nationalist Rep. Steve King.

“I have to be careful,” Koehler told me, pointing to the Pete pin on her shirt. “They got the Rules of the Road, where you need to be kind.”

I asked Koehler if she had a favorite rule. “My favorite one is to spread joy,” she said. “Because how could you not?”

The Rules of the Road are not just some weird team-building exercise, like a list form of the “High Hopes” dance Buttigieg volunteers have been doing. They are central to what his campaign is trying to become. It is a movement that’s less about any one issue or ideology than it is about a mood, a desire to elect someone respectful (rule no. 1), who will bring people together (teamwork, rule no. 4) and won’t say dumb things (substance, rule no. 7). Buttigieg speaks often about mobilizing the “religious left”; it’s only natural, then, that his operation is guided by its own Ten Commandments.

When I asked Sean Manning, Buttigieg’s Iowa deputy press secretary, what was drawing voters to Buttigieg, he gestured to a small rock sitting on top of a desk in the Ankeny field office. On it, someone had carefully painted the 10 rules over a sky-blue background—it’s the values.

“In something like the Iowa caucus, where it’s more than just showing up, casting a ballot, and leaving—you have to spend a night in a corner, you’re publicly declaring your support—building that kind of community and organization is really important for winning,” he said. “The messenger matters as much as the message, especially for a candidate like Pete, where he doesn’t have the built-in name recognition or the national reputation.”

For that reason, the campaign has leaned hard into “relational” organizing—building voter networks by organically starting from small circles of friends and family. Instead of canvassing a random block in Ankeny or cold-calling registered Democrats, the campaign trains volunteers to work through their personal contact lists. Volunteers invite friends and neighbors to Pete-themed housed parties, where they play ice-breakers emphasizing “shared values.” (One volunteer made a Buttigieg-themed Jeopardy game.) A supporter on Buttigieg’s Reddit message board suggests holding “Pete-ups” in public places, “and talking loudly enough to ‘accidentally’ be overheard.”

This isn’t necessarily groundbreaking stuff. All campaigns rely on personal connections and invisible networks. But Buttigieg has leaned into the concept; his campaign boasted to the New York Times in September that targeting volunteers’ own contact lists made their phone-banking nearly four times more effective, and it holds trainings to coach new recruits on how to make the pitch to people they personally know.

As the meeting got under way in Ankeny, similar groups of Buttigieg supporters were convening that evening at offices and homes across the state, to make calls to their friends and family. Before they got on the phones, Grayson Wormser, a field organizer for the area, who was wearing the rules on his T-shirt, asked the dozen or so volunteers in the room to introduce themselves and say how many conversations they’d had with voters about Pete that week, and to name their favorite “rule of the road.”

Everyone seemed to know the Rules of the Road, except for one man, who went on a long rant about signaling turns while driving. Wormser jumped in to help, pointing to his T-shirt.

As the meeting went on, the volunteers shared stories and tips. Someone suggested talking to voters at Aldi, the discount grocery store chain, reasoning that people there would be receptive to Buttigieg’s message. “You’re already sensible—you’re at Aldi!”

One story in particular hammered home the intimacy of the organizing effort. A woman named Shirley (belonging, rule no. 2) had brought along her neighbor, Jean (respect). They’d only just met—Jean had recently moved two doors down and seen Shirley’s Buttigieg sign. They got to talking about Pete, and now here Jean was, volunteering for his campaign.

“This is the perfect example of relational organizing!” Wormser said.

When they finished their stories the volunteers logged onto Buttigieg’s online organizing portal to enter information—names, addresses, political leanings—on the friends and family they’d talked to over the last week about Pete. Wormser asked them to each come up with the names of five people in their networks “that you want to reach out to this week to ask to sign ‘commit to caucus’ cards”—small glossy forms that indicate an intent to show up and support Buttigieg on February 3rd. “CTCs” are the unofficial currency of caucus organizing; these cards are how campaigns track their progress in the run-up to the big vote.

After making plans for a weekend canvass at an Iowa State University football tailgate, a few volunteers stuck around, and I got to talking with Ann Skallerup, a veteran from Altoona, who had had more conversations about Pete over the previous week than anyone else. (The key, it turned out, was to wear her Buttigieg shirt to a Veteran’s Day breakfast—captive audience.) Skallerup was a registered Republican, though she had voted Democratic in the last two presidential elections; she was finally changing her registration because of Pete.

Skallerup has met other candidates, but she was drawn to Buttigieg largely because of how he acts. She likes that he’s a polyglot and a person of faith, she admires his coming-out story, and she appreciates that he thanked her for her service—unlike one candidate she met who she won’t identify. “If he doesn’t know something, he’s going to ask questions,” she said.

In other words, she likes the Rules of the Road. “You’ve got to be respectful,” she said, invoking rule no. 1. She’d been apprehensive about putting a Buttigieg sign on her lawn, because her neighbor supports Trump, but she’d put Pete’s principles into action and spoke to the man respectfully. The sign went up.

There’s plenty of time for what Buttigieg is building to fall apart. Indeed, the same Register poll that showed him surging came with a caveat: just 30 percent of respondents were committed to their first-choice candidate. Over the next three months, voters might find they want some other value—experience, say, or maybe all those plans. But for now, there’s an open road and Buttigieg is in the driver’s seat.