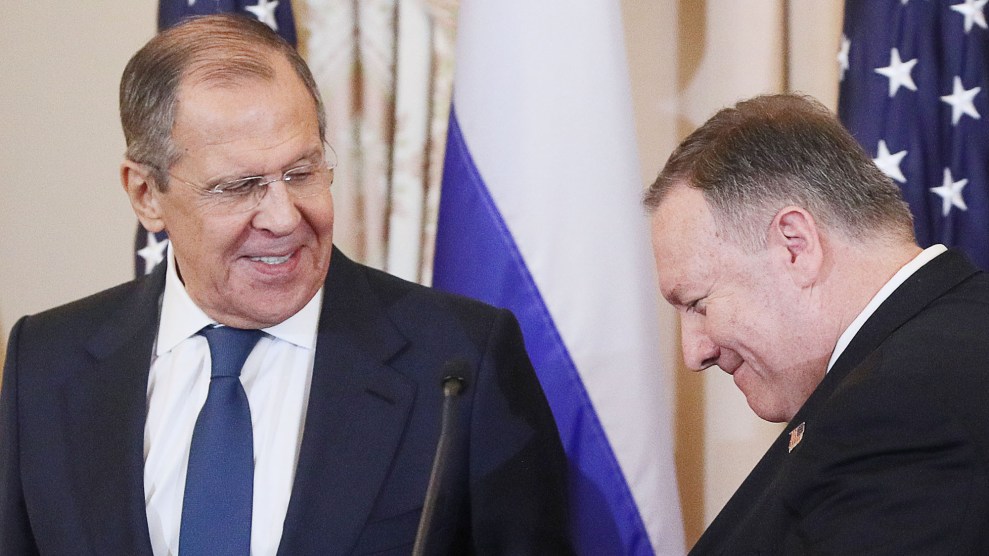 Lavrov and Pompeo after a joint news conference.Alexander Shcherbak/TASS via Zuma

House Democrats unveiled two articles of impeachment against President Donald Trump on Tuesday which stem, in part, from the president’s years-long efforts to downplay Russian influence operations around the 2016 US presidential elections. A few hours later, Secretary of State Mike Pompeo and Russian Foreign Minister Sergey Lavrov held a joint press conference at the US State Department, where, with a straight face, Lavrov doubled down on Russia’s denials of involvement in the last presidential election—a storyline embraced by Trump and some Congressional Republicans.

“Our joint work was hindered and continues to be hindered by the wave of suspicion that has overcome Washington,” Lavrov said, standing to Pompeo’s right. “We have highlighted once again that all speculation about our alleged interference in domestic processes in the United States are baseless [and] there are no facts that would support that. We have not seen these facts. No one has given us this proof because it simply does not exist.”

“Seeing the White House flatter a Russian foreign minister after years of well-documented intelligence operations…is just an invitation to continue.”

Lavrov said that going back to October 7, 2016, when the Obama administration announced Russia was meddling in the election—the same day the infamous Access Hollywood tape appeared and that WikiLeaks began releasing emails of Hillary Clinton campaign chair John Podesta obtained by Russian intelligence—the Russian government has asked the US government for the opportunity to examine US proof of Russian hacking and that “there was no response.”

He added that the Russian government is willing to publish correspondence related to election meddling between the two governments to “clear many matters up,” so hopefully “the turbulence that appeared out of thin air will die down, just like in 1950s, McCarthy came to naught.”

When asked whether Russia believes Ukraine meddled in the 2016 election—a claim the US intelligence community has said originated with the Russian government—Lavrov said: “It has nothing to do with us. That is an issue for two sovereign states, however that allows [us] to understand the absurdity of accusations against us, saying that we ostensibly interfered in the elections.”

A Washington Post reporter asked Lavrov why, if the Russian government wanted details on the US government’s findings on Russian hacking, they didn’t just read the Mueller Report, which led to the indictments of 12 Russians responsible for the meddling operation.

“We read it,” Lavrov said. “There is no proof of any collusion.”

Thomas Rid, a professor at Johns Hopkins University and an expert on disinformation who has extensively studied Russia’s 2016 operations, told Mother Jones that Lavrov’s statements, made from a podium alongside Pompeo, are par for the course.

“There is a century-long history of senior Russian officials denying well-planned active measures or disinformation campaigns,” Rid said. “You know what you’re going to get when you invite them to speak next to you.”

Rid, the author of a forthcoming book about the history of disinformation and political warfare, warned that “seeing the White House flatter a Russian foreign minister after years of well-documented intelligence operations and active measures targeting the United States is just an invitation to continue and perhaps escalate” those efforts.