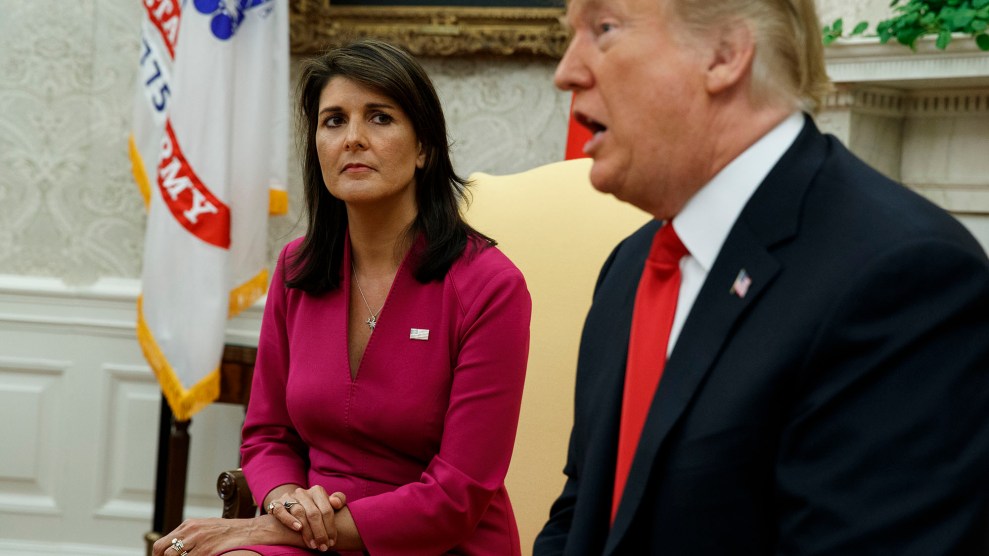 Nikki Haley—the former South Carolina governor and Trump administration UN ambassador—is out with a new book called With All Due Respect, because those are the words you’ll mouth to yourself when you watch this interview she gave to Glenn Beck:

Nikki Haley says the Confederate flag was about "service, and sacrifice, and heritage" until Dylan Roof "hijacked" it pic.twitter.com/pqdhKIezRl

Here is this guy that comes out with his manifesto holding the Confederate flag, and had just hijacked everything that people thought of. And we don’t have hateful people in South Carolina—there’s always the small minority that’s always gonna be there. People saw it as service, and sacrifice, and heritage. But once he did that, there was no way to overcome it. And the national media came in in droves. They wanted to define what happened. They wanted to make this about racism, they wanted to make it about gun control, they wanted to make it about the death penalty. And I really pushed off the national media and said there will be a time and place where we talk about this but it is not now. We’re gonna get through the funerals, we’re gonna respect them, and then we will have that conversation. And we had a really tough few weeks of debate. But we didn’t have riots, we had vigils. We didn’t have protests, we had hugs.

That’s Haley discussing the 2015 massacre of nine African-Americans at a church in Charleston by Dylann Roof, a white supremacist. Haley was governor at the time, and in aftermath of the shooting, she made the decision to remove the Confederate flag from the grounds of the state capitol. It was the right decision, and a long time coming. The flag had been installed in the 1960s, during the height of the Civil Rights Movement. Its message was as clear as the statues of the white supremacist senator, Strom Thurmond, and the white-supremacist terrorist, Wade Hampton, that grace the state house grounds—this state belongs to us, and you all know who “us” is.

But in explaining what was perhaps her most exemplary moment in public life Haley comes off a bit like Homer Stokes in Oh Brother, Where Art Thou, chiding the Soggy Bottom Boys for “desecrating a fiery cross” by crashing a Klan rally—she’s whitewashing the flag and what it always stood for. The words she used with Beck were similar to the language she used in her 2015 announcement—Roof, she said then, had a “sick and twisted view of the flag.” But that’s too charitable. It was the flag of a treasonous government created for the express purpose of keeping humans in bondage. It was kept alive over the generations as an expression of white-power, and a perpetual reminder—like all those statues—of who the state, or the region, was supposed to belong to. Roof didn’t hijack the flag and change its meaning; he lived up to it.