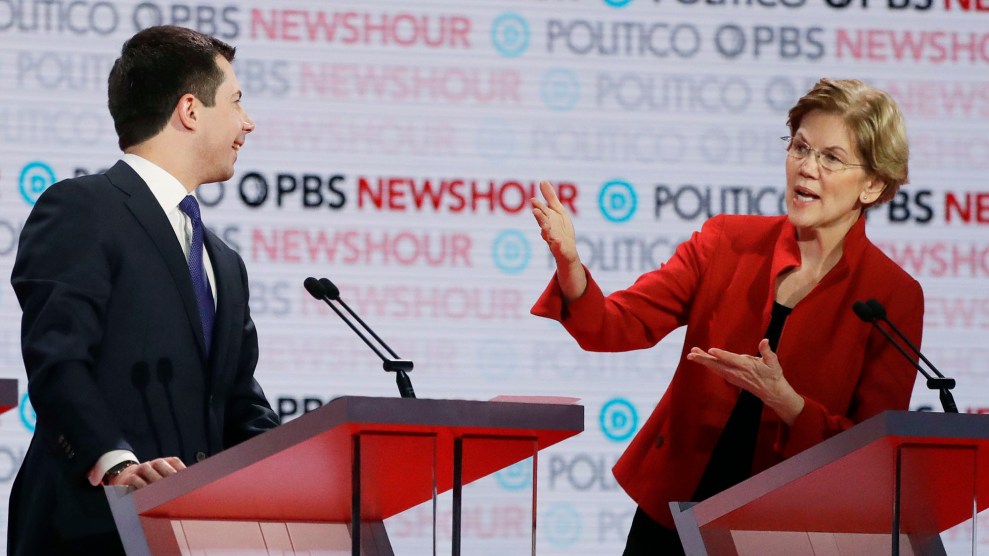 It was always going to be the wine cave debate. It was just a question of when the subject would finally come up.

On Sunday, just a few days after caving to pressure and agreeing to release a list of campaign bundlers (incomplete, it turned out) and open his fundraisers to the press, South Bend Mayor Pete Buttigieg dropped by a wine cave in Napa Valley to raise money at a fundraiser hosted by a billionaire California couple.

Not just any wine cave, either. “The Hall Rutherford wine caves,” the Associated Press noted, “boast a chandelier with 1,500 Swarovski crystals, an onyx banquet table to reflect its luminescence and bottles of cabernet sauvignon that sell for as much as $900.”

Photos of the event were catnip for supporters of Vermont Sen. Bernie Sanders and Massachusetts Sen. Elizabeth Warren, both of whom have sworn off high-dollar fundraisers during the presidential campaigns. Jeff Weaver, a longtime Sanders adviser, showed up to Thursday’s Democratic presidential debate in Los Angeles wearing a black t-shirt with the URL PetesWineCave.com—a Sanders fundraising site.

It took a while for the subject to come up, but when it did, it resulted in the most spirited exchange of the debate—and one of the most illuminating arguments about money in politics that we’ve seen this cycle. It started roughly an hour into the night’s proceedings when Warren boasted of taking 100,000 selfies with supporters over the course of the campaign.

“Those selfies cost nobody anything,” she said, contrasting those photos—and her lack of fundraisers—with expensive dinners where donors are giving money “in order to maybe be considered an ambassador.” (Whether to consider giving ambassadorships to donors is another area of recent disagreement between Warren and Buttigieg.)

“People who can put down $5,000 to have a picture taken don’t have the same priorities of people struggling with student loan debt or struggling to pay off medical debt,” Warren said.

Buttigieg, who understood perfectly well who she was referring to, spoke up in his own defense. Trump has already raised $300 million, he pointed out—if Democrats are going to put up a fight next fall, “we shouldn’t try to do it with one hand tied behind our backs.”

And that’s when Warren brought up the wine cave. “So, the mayor just recently had a fundraiser that was held in a wine cave, full of crystals, and served $900-a-bottle wine,” she said. “Think about who comes to that.”

Buttigieg pushed back, noting (as he has before) that he has the smallest net worth of anyone running. “I’m literally the only person on this stage who is not a millionaire or a billionaire,” he said. By Warren’s logic, Buttigieg continued, Warren herself was part of the problem.

“Now, supposing you went home and felt the holiday spirit—I know this isn’t likely, but stay with me—and decided to go on peteforamerica.com and gave the maximum allowable by law, $2,800,” he said. “Would that pollute my campaign because it came from a wealthy person?”

Besides, he added, Warren herself wasn’t playing by her own rules. Though she hadn’t held high-dollar fundraisers as a presidential candidate, she had held them as a senator and had used some of that money to seed her current White House bid.

It went on a bit longer, and eventually Sen. Amy Klobuchar (Minn.) jumped in to talk about—and this feels weird just to type—Wind Cave, but you get the picture.

Buttigieg is right on some level—Warren did change her policy on fundraisers between her last Senate campaign and her current presidential one, though the idea that all millionaires and billionaires are created equal doesn’t really pass the (excuse me) sommelier test. Warren’s argument is about transactional politics—rich people giving money for access and influence, not just rich people donating unsolicited on the internet. And her comments weren’t coming out nowhere. Though Gordon Sondland’s name never came up explicitly, her criticism came in the midst of an impeachment crisis in which the ill-qualified hotelier who bought an ambassadorship with political contributions ended up playing a starring role. To bring this full circle: Kathyrn Hall, the co-owner of the wine cave and co-host of the fundraiser, was appointed ambassador to Austria in 1997 after the couple gave generously to President Bill Clinton’s reelection campaign.

Given those circumstances, and the narrow margins separating these two candidates, it’s probably not the last we’ll hear of this argument in the weeks and months to come.