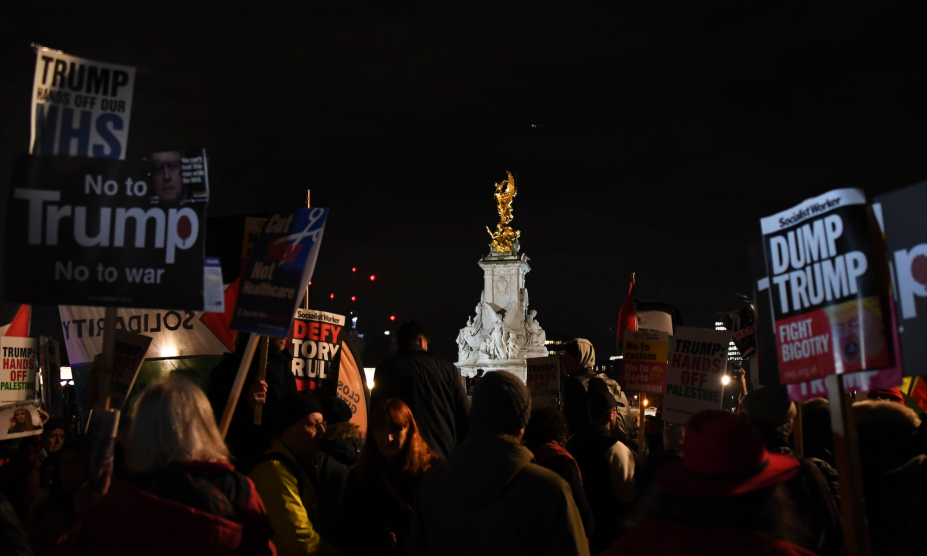 It was only a few months ago in June, during his first state visit to the United Kingdom, when President Donald Trump could barely contain his enthusiasm for the Queen of England. “The meeting with the Queen was incredible,” he told Fox News. “We had automatic chemistry.”

But en route to Buckingham Palace on Tuesday, an undeniable cloud blotted out the summer’s optimism. One reason is that Trump isn’t the marquee guest. The Queen is hosting a banquet for members of NATO in honor of the 70th anniversary of the military alliance Trump has repeatedly attacked and threatened to cut US funding from. And as evidenced by a tweet announcing his arrival to the UK Monday evening, NATO’s position as the focus of Trump’s fury has been replaced by Congress and the looming threat of impeachment back home.

Just landed in the United Kingdom, heading to London for NATO meetings tomorrow. Prior to landing I read the Republicans Report on the Impeachment Hoax. Great job! Radical Left has NO CASE. Read the Transcripts. Shouldn’t even be allowed. Can we go to Supreme Court to stop?

For many Britons, however, the most critical difference between the two visits could be seen in the protests greeting the unpopular American president this time around. Shortly before the banquet began, doctors and nurses from the National Health Service gathered in Trafalgar Square to make their way to Buckingham Palace, many holding “Trump: Hands Off Our NHS” signs. They were referring to the president’s June comments suggesting that the NHS could be on the table for a US-UK trade deal in post-Brexit negotiations, and the further revelation last week from leaked documents that indicated conversations between British and US officials that included the NHS as a part of trade negotiations. The overwhelmingly negative reaction to the remarks forced Trump to backpedal in June, and on Tuesday morning ahead of the Queen’s reception, he told reporters that he wanted “nothing to do with” the NHS, even if it were handed to him on a “silver platter.”

No one demonstrating on Tuesday appeared convinced. “Trump has been very, very clear that he is hopeful that if we go through with Brexit and have to strike a trade deal with the USA, that he is very keen to get his hands on our NHS,” Katy Sutcliffe, an academic at the University of College London, told me as she held a poster that read, “Keep your tiny hands off our NHS.”

Both Sutcliffe and her colleague Meena Khatwa agreed that Trump should “absolutely” be impeached. “He’s not fit to govern, really,” Khatwa said. “He’s a danger to society, and he’s a danger to everyone out there.”

While Trump’s previous trips to London attracted protests with larger turnouts, Tuesday’s demonstrations appeared to carry a far more personal, if not anguished, resonance for its participants. Here was a foreign leader, amid a fast-approaching general election with generational consequences, whose mere presence for them signified a potential threat to the one British institution more beloved than the Queen herself. And healthcare workers, a typically apolitical group, were at the frontlines sounding the alarm.

David Christie, a local resident who protested, was one of several to point to last week’s leaked papers. “They have now published documents which actually show that there have been months of ongoing talks about what America would like,” Christie explained, “and America is in a much stronger position than we are, as we’re about to leave our strong allies in Europe.”

“In my family, there were three children with quite a rare disease,” he continued. “My father often mentioned the fact that the care that we were given from a very early age, we didn’t pay a penny for. So [the NHS] has been something I’ve been very thankful for, and others in my family too.”

For Elsa Ochoa, an NHS interpreter who moved to London from northern Spain more than 30 years ago, the political situation in both the US and Great Britain recalled her time living through the Franco dictatorship. “I know very well what fascism is like and I can see that rising all over the world,” she said. “I’m very scared.”