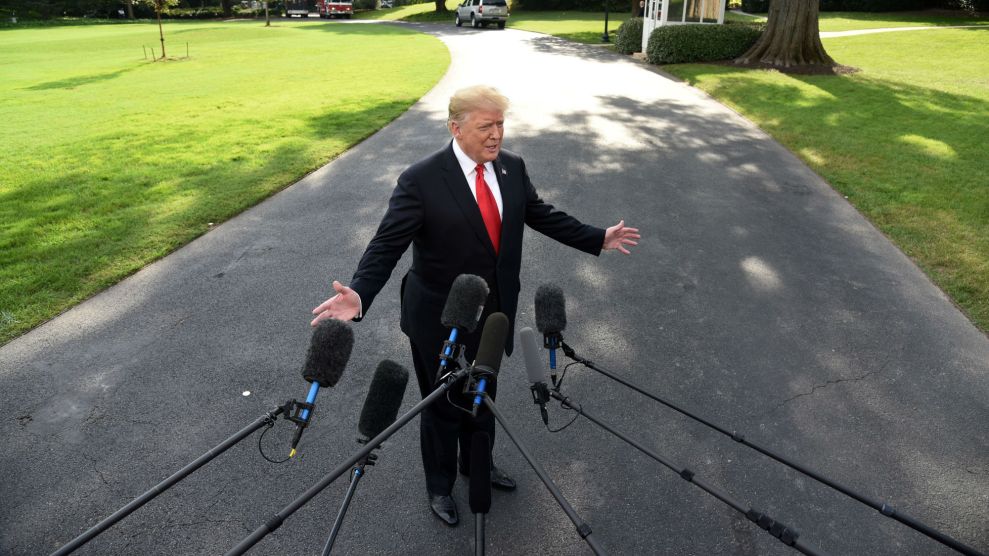 Donald Trump talks to media as he leaves the White House by the South lawn on October 9, 2018.Tasos Katopodis/Getty Images

After returning from a recent trip to Ukraine, Rudy Giuliani deployed an interesting tactic for the president’s personal lawyer: Confessing to the conduct for which Trump is being impeached.

In public statements over the past week, the former New York Mayor flatly admitted that he had pushed Trump to fire former US Ambassador to Ukraine Marie Yovanovitch because he thought she would complicate his effort to force Ukrainian President Volodymyr Zelensky to launch investigations aimed at helping Trump politically. “I believed that I needed Yovanovitch out of the way,” Giuliani told the New Yorker. “She was going to make the investigations difficult for everybody.”

This admission might be foolish, but it is consistent with the tactic used by Trump and other subordinates throughout his presidency: Admit to the controversial act, despite denying it before, claim there is nothing wrong with it, and count on loyalists in Congress and conservative media to defend it. In a sense, it’s working. The House impeached Trump on Wednesday, but Rep. Justin Amash (I-Mich.), who was a Republican before his party booted him for criticizing Trump, was the only non-Democrat to vote for impeachment. Scores of Republicans argued there was no clear evidence Trump had abused his office by holding up a White House meeting for Zelensky and vital military aid until Ukraine opened investigations into former Vice President Joe Biden and a conspiracy theory that a Democratic National Committee server is secretly in Ukraine. (This is not only wrong but a piece of Russian propaganda.)

Congressional Republicans’ denials are astonishing given that Trump and his top aides have repeatedly proclaimed what they did. Here are Trump and company’s top confessions:

1. On October 3, about a week after the public release of the whistleblower complaint and a transcript of the July 25 call between Trump and Zelensky, which substantiated the whistleblower’s claims, Trump not only admitted that he had pushed the Ukrainian President to investigate former Vice President Joe Biden, but continued to urge such a probe. “If they were honest about it, they would start a major investigation into the Bidens,” Trump said on the White House lawn. He also urged China to open its own investigate into Biden, his potential 2020 rival, and son Hunter Biden, who had business there while Biden was president. “Likewise, China should start an investigation into the Bidens, because what happened in China is just about as bad as what happened with Ukraine,” Trump said.

2. During an October 17 press conference, White House Chief of Staff Mick Mulvaney, who also runs the Office of Management and Budget, copped to precisely the thing Republicans had been heatedly denying: a “quid pro quo” involving military aid.

Did Trump “also mention to me in passing the corruption related to the DNC server?” Mulvaney asked. “Absolutely. No question about that. But that’s it, and that’s why we held up the money.”

“But to be clear, what you just described is a quid pro quo,” ABC News’ Jonathan Karl said. Mulvaney responded. “We do that all the time with foreign policy.” Moments later, he added: “Get over it. There’s going to be political influence in foreign policy.” (Mulvaney later denied that he had admitted to a quid pro quo.)

3. Then there is Gordon Sondland, the US Ambassador to the European Union. In his November 20 testimony before the House Intelligence Committee, Sondland made it crystal clear that Trump refused to give Zelensky a White House meeting until Zelensky announced the investigations Trump wanted. “I know that members of this committee frequently frame these complicated issues in the form of a simple question: Was there a ‘quid pro quo’?” Sondland said. “With regard to the requested White House call and the White House meeting, the answer is yes.”

4. Sondland was less clear on Trump ordering a hold on military aid. But Trump, the next day, helped clarify that issue when he called into Fox & Friends. “We’re looking for corruption,” the president said. “There’s tremendous corruption. Why should we be giving hundreds of millions of dollars to countries when there’s this kind of corruption?”

Trump threw his backers a bone by pretending to be concerned about corruption, but quickly clarified that when he says “corruption” he means something else: His conspiracy theory about the DNC server being in Ukraine. “They have the server, right, from the DNC, Democratic National Committee…And I still want to see that server,” Trump explained on Fox. (Trump’s kooky claim is based, among other things, on a misapprehension. He seems to believe forensic evidence of the hack of the DNC is on one server, where hackers might have left evidence. In fact, the committee had 140 servers and used a cloud-based system. Crowdstrike, an IT security firm, imaged the servers and then gave the data to the FBI, not Ukraine. That is among the evidence that led the US intelligence agencies to unanimously conclude Russia hacked Democrats to help Trump.)

5. Since returning from a trip earlier this month to Ukraine, Giuliani, while insisting he did nothing wrong, has volunteered new details on his smear campaign against Yovanovitch. He says he worked to force her firing because she posed an obstacle to Ukraine announcing the Biden and DNC server investigations he was helping Trump try to secure. After speaking to the New Yorker, Giuliani took credit for the ambassador’s ouster in statements to the New York Times. He even revealed that Secretary of State Mike Pompeo had played a larger than previously known role in the effort. Giuliani told the Times Trump had told him to raise the issue with secretary, and that Giuliani later gave Pompeo memos detailing claims made by a pair of Ukrainian prosecutors about Yovanovitch. Giuliani said he believes that this effort caused the ambassador’s ouster.

On December 17, the former mayor tweeted: “Yovanovitch needed to be removed for many reasons most critical she was denying visas to Ukrainians who wanted to come to US and explain Dem corruption in Ukraine. She was OBSTRUCTING JUSTICE and that’s not the only thing she was doing. She at minimum enabled Ukrainian collusion.” Giuliani made the same claims on Fox News. He has offered no credible evidence for his attacks on Yovanovitch. But his statements are admissions that he influenced US foreign policy to cause Ukraine to announce investigations intended to help Trump in 2020.

Trump, Mulvaney, Sondland, and Giuliani are not saying they didn’t do the things that Trump was just impeached for ordering. They’re saying they did, but it’s fine. The Republican-run Senate will have to decide if they agree.