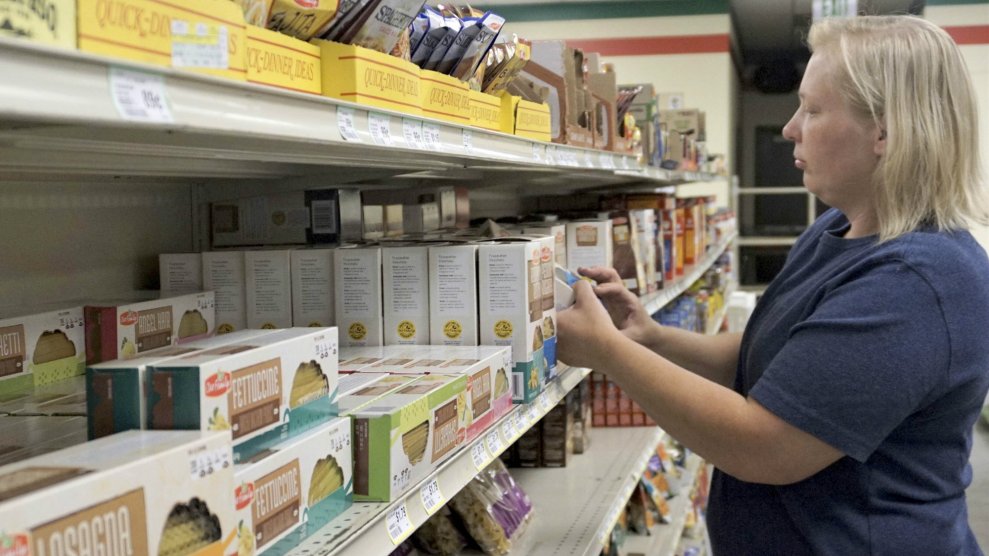 Earlier this month, the US Department of Agriculture finalized new restrictions on eligibility for the Supplemental Nutrition Assistance Program, commonly known as food stamps, which provided food assistance to 40 million people in 2018. Millions of low-income families, seniors, veterans, and people with disabilities access this vital benefit. Under the new rule, which goes into effect in April 2020, work requirements for the 700,000 SNAP users who are labeled as “able-bodied” adults without any dependents (ABAWD) will be tightened, potentially leaving them without access to the program and pushed deeper into poverty.

But an unintended consequence of this measure is the damage that it will do to rural communities and the grocery stores they rely on.

“SNAP is one of the best government programs out there,” Kip Yoss, who owns and operates two  grocery stores in rural Missouri, told the Daily Yonder, a news source for rural America. “It really helps us pay our utilities, our workers, and keep the doors open.” The USDA is estimating that small grocers will lose $177 a month on average, which is a lot for grocery stores operating on razor-thin margins.

“SNAP is one of the best government programs out there. It really helps us pay our utilities, our workers, and keep the doors open.”

In 1996, President Bill Clinton signed a comprehensive welfare reform bill that, among other things, specifically required able-bodied SNAP users between the ages of 18 and 49 without any dependents to prove that they were working at least 20 hours a week, or they would be cut off after three months of benefits. To mitigate the impact of this requirement on areas with high unemployment, states could request waivers for the three-month restriction, which would extend benefits for the able-bodied recipients. Many of them, according to the Center on Budget and Policy Priorities, are among the nation’s poorest adults, with an average income at 18 percent of the poverty line. (Delaware is the only state that has never requested such a waiver.) But the Trump administration’s new rule will make those waivers much harder to get for this population, leaving hundreds of thousands of people—and the communities in which they live—vulnerable.

“SNAP users help grocery stores’ bottom line,” says David Procter, director of Kansas State University’s Rural Grocery Initiative. According to a report from Civil Eats, a news organization that reports on America’s food system, SNAP cuts will mean that places as different as Detroit and rural Alaska could suffer. In Detroit, two different grocers told researchers that SNAP makes up 80 percent of their business. In rural Alaska, according to Eater, a food news site, for some village grocers, SNAP benefits make up 40 percent of their profits. Oregon Food Bank CEO Susannah Morgan estimated that the state stands to lose $18 million in revenue at grocery stores and agricultural production.

Small grocery stores in rural areas are likely to experience the biggest financial hit. “SNAP is a huge economic engine for rural areas,” Sarah Reinhardt, a food systems and health analyst at the Union of Concerned Scientists, says. Out of the 150 counties with the highest SNAP participation rates, 136 are rural, including 48 of the top 50. In 2017, $65 billion in SNAP benefits created and supported 570,000 jobs—50,000 of which were in the agriculture sector.

Because more SNAP recipients live in rural counties than urban ones, they are more likely to shop locally, supporting a community grocer. When SNAP benefits are reduced, grocers also suffer, as do the energy suppliers that keep the lights on, the truck drivers and distributers who move the products, and the farmers who produce the food.  Every dollar spent through food assistance programs translates into $1.80 of economic activity.

When a recipient uses SNAP benefits for food, the individual’s other limited resources are freed up for housing, health care, and transportation, which, in turn, flow back into the economy. Because those affected by the new rule are able-bodied adults without dependents, SNAP is usually the only benefit they qualify for. Without food stamps, they will struggle even more to make ends meet. As I reported last week:

“These are folks who are already living on the edge,” says Lisa Hamler-Fugitt, the executive director of the Ohio Association of Foodbanks. She adds, “It is our national nutrition safety net and it serves 40 million Americans. I’ve never witnessed anything like this. It’s a deliberate attack.” Unsurprisingly, the rule will hit communities of color and people living in rural areas the hardest.

Last year, the Farm Bill, an $867 billion multiyear piece of legislation, was held up in Congress while Republicans and Democrats struggled to agree on a final version. The measure that was passed by the then Republican House included stricter work requirements, similar to the rule finalized by USDA, that would have cut off hundreds of thousands of people from their benefits. Anti-hunger advocates pushed back, and the Senate balked. The bill was passed without any changes to SNAP in December 2018, two weeks before the government shutdown of 2018-2019. The shutdown caused implementation of the new farm bill rules to be slowed or halted.

But in February, the Agriculture Department proposed a slightly revised version of the work requirements as a federal rule that didn’t require congressional approval. Once again, advocates mobilized and left more than 100,000 comments against the rule. Region I of the Maine Regional Homeless Council submitted a comment emphasizing SNAP’s vast presence in the state’s economy, saying the program is “vital to Maine’s economy and to the more than 1,500 retailers, including many in rural areas, that participate in the SNAP program. SNAP injects more than $250 million dollars directly into Maine’s economy annually.”

The Agriculture Department acknowledged that the majority of the comments were opposed to the rule. “Commenters cited recent research on SNAP work requirements that found that a majority of individuals exposed to these requirements were already attached to the labor force and were working part of the year,” the agency said in the finalized rule, “but many would be unable to consistently meet the ABAWD work requirement due to volatility in the low-wage labor market.” It argued, however, that the rule would “incentivize” people to work.

Despite the widespread pushback, the agency finalized the rule. And beginning in April, its consequences are likely to be felt not by just able bodied recipients unable to find work or access food assistance. “It’s certainly possible,” Reinhardt says, “that this rule could compel some grocery stores to shut their doors for good.”