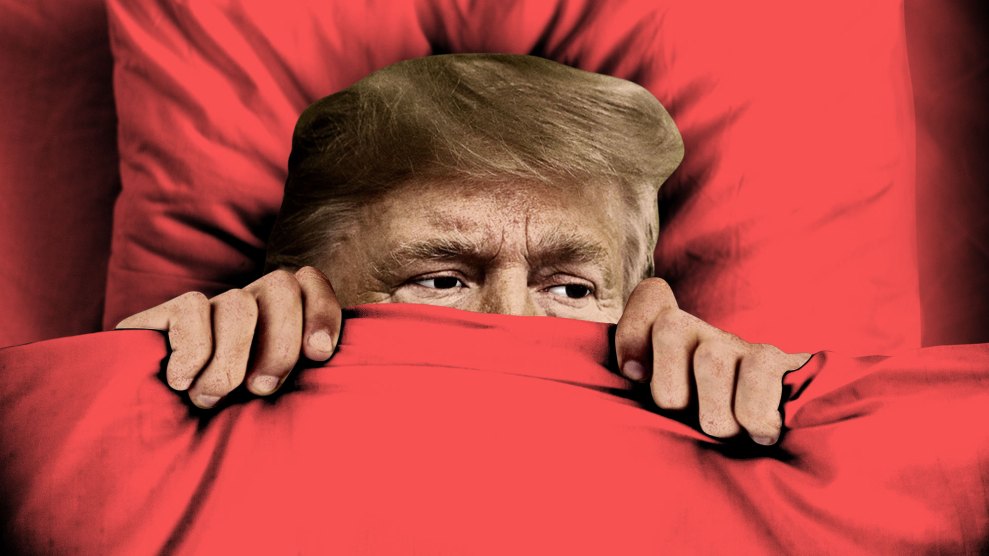 Donald Trump got off easy.

On Friday morning, the House Judiciary Committee approved two articles of impeachment against the 45th president of the United States. In the historic move, Trump was cited for abusing his office and obstructing Congress’ investigation of that abuse. The abuse was a narrow matter: Trump’s effort to muscle the Ukrainian president into initiating public investigations that would produce dirt on political rival Joe Biden and yield information to support a crazy and debunked conspiracy theory that holds Russia did not hack the 2016 election and that Ukraine was somehow involved in the cyber-assault on Democrats. The obstruction was Trump’s blocking of congressional requests for witnesses and documents related to the Ukraine caper.

Two weeks of hearings conducted by the House Intelligence Committee presented a strong case that Trump leveraged official actions—a phone call or meeting with the Ukrainian leader and releasing $391 million in military assistance to Kyiv—to pressure the Ukrainian government to take action for Trump’s personal political benefit. Trump was squeezing Ukraine in an underhanded fashion to influence the 2020 election in his favor. The Democrats have argued, with justification, that this conduct was impeachable, for it showed Trump was exploiting his presidential power to cheat and to undermine the foundation of American democracy: the electoral process. Yet the medium-impeachment strategy the Democrats have embraced does not convey the full measure of Trump’s crimes against the Constitution, and it could even distract from the full damage he has done to the republic.

There is no question that this impeachment vote is a serious indictment of Trump, and it is no secret that House Speaker Nancy Pelosi and other House Democratic leaders, after rebuffing calls from progressive Democrats and the Twitterish grassroots for Trump’s impeachment, settled on the Ukraine scandal as a narrow and well-defined basis for an impeachment, believing that this affair could be easily explained to the American public and quickly investigated. They calculated that many voters would not welcome a long and drawn-out impeachment inquiry that could be perceived as a nasty partisan mudwrestling match that prevents Congress from addressing vital legislative matters. And the Dems were spooked by the Trump-Russia scandal. Special counsel Robert Mueller’s investigation and his subsequent lackluster congressional appearance this spring had not caused the decisive change in public opinion that some Democrats expected. And consultants for the party, prior to the midterm elections, had cautioned Democrats that the public generally was not engaged by the Russia matter and that candidates should not dwell on the topic.

The medium-impeachment strategy the Democrats have embraced does not convey the full measure of Trump’s crimes against the Constitution, and it could even distract from the full damage he has done to the republic.

So Ukraine it was. Following the release of the quasi-transcript of Trump’s call with Volodymyr Zelensky—in which he told the Ukrainian president that in return for Javelin anti-tank missiles Zelensky would have do him the “favor” of launching these political investigations—Pelosi and her lieutenants decided they no longer had a choice on impeachment. And they believed it could be handled as sort of a spin-off that focused only on this limited slice of Trump’s misconduct. But nothing with Trump is neat. Or simple.

Ever since the news broke that a whistleblower reported the Trump-Zelensky call to the intelligence community’s inspector general, who determined this was a legitimate concern, the story has spread. It now involves Rudy Giuliani, Trump’s personal lawyer, and his never-ending skullduggery in Ukraine in partnership with associates who have been indicted (for allegedly making illegal contributions to Republican candidates) and corrupt Ukrainian officials who might be in league with a Ukrainian oligarch indicted in the United States and who has been looking to get a break from Trump’s Justice Department. One of those Giuliani associates, Lev Parnas, recently got a $1 million payment from a yet-unknown source in Russia. (In 2018, Parnas and the other associate, Igor Fruman, received $1 million from a Russian businessman, purportedly to bankroll donations to American politicians who could help their effort to break into the cannabis business in the United States.) And Rep. Devin Nunes (R-Calif.), the senior Republican on the House Intelligence Committee who has been pushing assorted side-issues and conspiracy theories that absolve Trump, has been implicated in this mess. Trump’s Ukraine misadventure is more complicated than the Democrats first assumed. And as the Democrats investigated the Trump team’s interactions with Ukraine, they have discovered that senior members of the administration played significant roles in the episode: Secretary of State Mike Pompeo, White House chief of staff Mick Mulvaney, and former National Security Adviser John Bolton.

Yet the House Intelligence Committee report underpinning Friday’s impeachment vote did not cover many of these other angles. That’s partly because Trump ordered government officials not to cooperate with the inquiry and partly because House investigators did not have the time or resources to chase down all the leads that have popped up. The House Democrats have nailed Trump for the central act in the scandal: improperly pushing a foreign leader beholden to the United States to take steps that would taint a Trump foe. But they have not been able to sort out, let alone convey to the public, a full picture of the scandal in which this specific instance of wrongdoing resides. (US attorneys in New York are reportedly investigating Giuliani for these and other foreign escapades.)

And the full version of Trump’s Ukrainian scandal itself exists within a much larger context. His presidency is the product of corruption, and from the get-go it has been an orgy of self-interest that has undermined democratic rule and threatened the nation’s security. His run of what might be impeachable offenses did not start with Ukraine. It began during the 2016 campaign. Trump and his aides welcomed, requested, aided, and abetted a foreign adversary’s attack on the United States. Can a president be impeached for actions that transpired prior to him becoming commander in chief? The Constitution does not specify that impeachment only applies to “high Crimes and Misdemeanors” committed while in office. (Given that the current Justice Department position is that a president cannot be indicted on federal charges while serving and impeachment is the only recourse, it seems reasonable to assume that if evidence emerges that a president committed serious wrongdoing before entering the White House, he could be impeached for that. Otherwise the nation would be stuck with a possible felon at 1600 Pennsylvania Avenue.) It is certainly conceivable that assisting an assault on the United States could warrant the consideration of impeachment.

Moreover, Trump continued providing that assistance to Moscow after he became president. He has repeatedly denied or dismissed the Russian attack and boosted Vladimir Putin’s disinformation campaign that rejects responsibility and attempts to divert attention from Russia’s sweeping and extensive covert intervention to unfounded allegations of Ukrainian meddling. Impeachable? Helping a foe cover up an attack on America—that seems worth the discussion. Moreover, Trump reportedly told Russian officials during a 2017 meeting in the Oval Office that he was unconcerned about the Russian attack. And Trump also has reportedly refused to address the threat posed by Russia (or others) to the 2020 election. By giving Moscow a pass on the 2016 election and failing to protect the United States from a possible repeat next year, Trump has been disregarding his obligations as commander in chief and violating his oath of office. Is such profound negligence not within the parameters of impeachment?

In any event, congressional Democrats have done a poor job of communicating the fundamental truths of the Russia scandal—Russia attacked the election, and Trump has been a collaborator—to the public. Rather, Trump dominated the national conversation with his “no collusion” mantra, and the Democrats did not follow through on their pre-midterms vow to revive the Russia investigation. They contracted out this important job to Mueller. Consequently, Trump’s Russia treachery never became a conversation of impeachment. His brazen obstruction of the Trump-Russia scandal, as thoroughly documented by Mueller, did spark calls for impeachment within the House Democratic caucus and beyond. But the Democrats have eschewed including any of that in the current impeachment push. (They also chose not to make any fuss about the account of Trump telling the Russians he didn’t give a damn about their assault on American democracy.)

There are other major Trump transgressions that Democrats as a whole have not seriously pondered for impeachment. Trump has blatantly violated the emoluments clause of the Constitution, which prohibits a president from accepting payments from a foreign state. Yet through his hotels and businesses, Trump has pocketed large amounts of money from governments and businesses overseas. He has committed this crime against the Constitution in plain sight. There have been lawsuits filed and some congressional criticism, but no turn toward impeachment as the remedy. (Trump’s trashing of this constitutional command is in sync with the rampant conflicts-of-interest and nepotism that flow throughout his administration and with his steadfast refusal to release his tax returns.)

And let’s not forget his illegal hush-money payment to porn star Stormy Daniels, which was made to keep the story of her liaison with Trump from affecting the 2016 election–and which eventually landed his personal attorney, Michael Cohen, in a federal prison. (Cohen also was convicted of lying to Congress about Trump’s secret attempt during the 2016 campaign to negotiate a deal to develop a tower project in Moscow—an endeavor that Trump hid from the voters and that included his company asking Putin’s office for assistance.) A filing in the Cohen case noted that Trump “directed” Cohen to make the illegal pay-offs to Daniels and another woman. The president of the United States—a.k.a. “Individual 1″—was essentially named as a co-conspirator in a criminal case. That, too, could be worthy of an impeachment debate.

Much is rotten within the Trump presidency that could trigger the ultimate political punishment. But rather than throw a long buffet table of wrongdoing at the public, the Democrats resolved to present one easy-to-digest plate. As of now, the wisdom of this strategy has not been fully tested. Facing this strategy, ranting Republicans have deployed diversions, have denied basic facts, have decried the streamlined process, and have belittled the Ukraine case as not momentous enough for the most extreme verdict in politics. They have not had to confront the many other grievous offenses and malfeasances of Trump. It’s unlikely the Republicans’ tactics would be much different were they contending with a wider impeachment case. But they have the luxury of training their fire on a narrower target, as Trump attempts to trivialize this impeachment vote, as grave and weighty as it is, as nothing but petty politics.