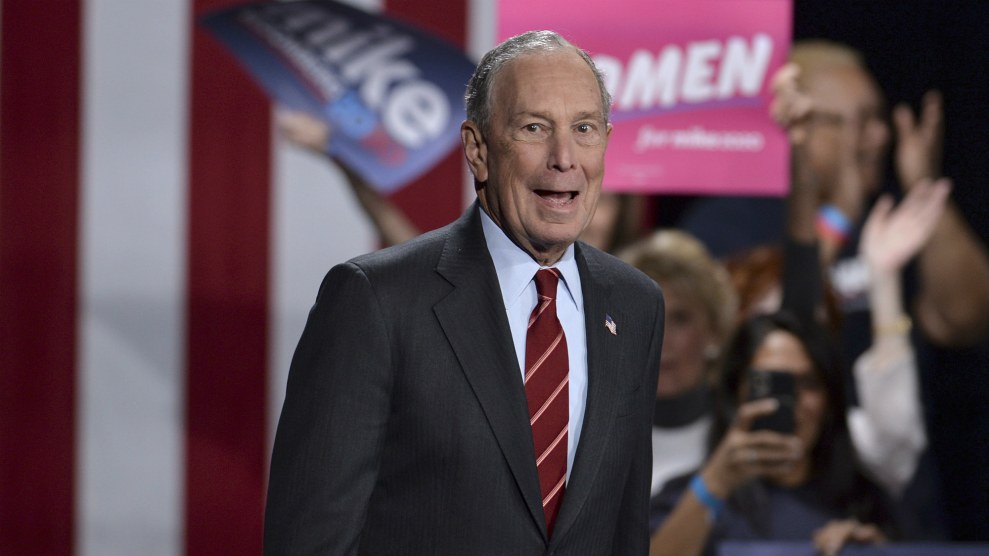 A lawsuit by House Democrats to force the administration to hand over Donald Trump’s tax returns to investigators was put on hold by a federal judge on Tuesday. But the president may soon feel pressure to disclose more about his personal finances—and separate himself from his business empire—from a different source: the other New York billionaire running for president.

“He’ll release his returns,” says Tim O’Brien, a former columnist and executive editor at Bloomberg Opinion and Trump biographer, “and he has every intention of handling this in a completely different way than Donald Trump has, because he understands the transparency around his finances and the absence of financial conflicts of interest are important for the president of the United States.”

Trump, who is estimated by Forbes magazine to have a net worth of about $3.1 billion, has steadfastly refused to release his tax returns or reveal many details of his personal finances. The sole concession to transparency has been an annual release of the personal financial documents that all top federal employees must fill out, which lists—in broad ranges—assets and debts and some information on income. That document, which Trump is expected to file again in May, has raised new questions about Trump’s finances in the past—for example, a $50 million loan the president claims to have purchased years ago, which does not appear to be real, suggesting that Trump may have committed tax fraud. Releasing his actual tax returns would not only help investigators determine whether the president has truly defrauded the government, but would also shed light on how much money Trump truly makes and how much he pays in taxes.

After Democrats took control of the House, Ways and Means Committee chair Richard Neal (D-Mass.) began pursuing a copy of the president’s tax returns, invoking a law that requires the Internal Revenue Service to provide copies of tax returns if requested by Congress. The Trump administration has refused to cooperate, and on Tuesday, a federal judge put the fight on hold until another case is decided, involving former White House counsel Don McGahn and whether he can be made to testify in Congress’ impeachment inquiry. The judge’s ruling may give the president some breathing room; the McGahn case could drag on for months. But he might soon face peer pressure from another billionaire whose willingness to reveal financial details undermines many of Trump’s arguments about protecting his own.

One of several reasons Trump has given for refusing to release his tax returns is that, given his wealth, they are too complicated for Americans to understand. “It is big,” he told Politico. “And it is complex. And it is probably feet high. It is a very complex instrument. And I think that people would not understand it.”

But Bloomberg, who Forbes estimates has a net worth of $59,5 billion, is listed as the 8th richest person in the world (to Trump’s 715th) and presumably has tax returns at least as complicated as Trump’s. O’Brien, the Bloomberg aide, says his boss is committed to releasing his actual returns.

As it happens, O’Brien wrote a book about Trump in the early 2000s that alleged the president is not actually a billionaire, and he was sued by Trump over the claim. During the course of the lawsuit—which was eventually dismissed—O’Brien said he was allowed to see copies of the president’s tax returns, though he was not permitted to disclose details about them.

O’Brien did say that Bloomberg will likely withhold some details of his tax returns. Typically, presidential candidates self-censor some personal details, though the key information—income and effective tax rate paid—is usually included.

While serving as the mayor of New York, Bloomberg was famously reluctant to share details of his taxes:

In 2001, when he first ran for mayor, Bloomberg refused to release his IRS filings even as his rivals disclosed theirs. Asked why his competitors would release their returns but he wouldn’t, Bloomberg reportedly snarled that it was easy for other candidates who didn’t have his wealth.

“That is fine,” he told reporters. “They don’t make anything.”

Instead, Bloomberg allowed reporters to view summaries of his tax information—in person, for a limited period of time. O’Brien said that will not be the way Bloomberg handles it if he is the nominee, opting instead for public release of actual returns.

The first insights into Bloomberg’s wealth will likely come in early February. February 4 is the deadline for Bloomberg to file his own personal financial disclosure, which would lay out his finances in ranges, as Trump’s disclosures have done.

Bloomberg could also up the ante for Trump to separate himself from his businesses, which are riddled with conflicts of interest. The president has claimed that his business holdings are too hard to unwind. But Bloomberg plans to do exactly what Trump says he can’t if he becomes the Democratic nominee.

“If he’s the nominee, he intends to place the business in a blind trust, so he can move forward to a sale,” O’Brien says. “And the conditions of the sale are, he doesn’t want to sell it to a private equity or a foreign buyer, to protect the [Bloomberg News] newsroom.”

Before his inauguration, Trump put his businesses into a revocable trust in his name—a financial mechanism that essentially changed nothing about his ultimate ownership of the companies and allowed him to continue to withdraw money.