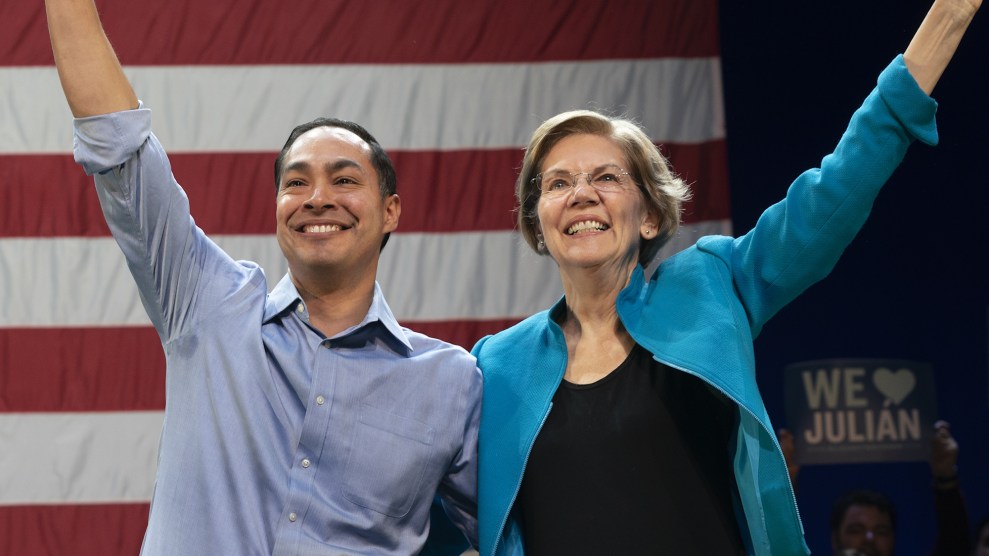 Jayes-Green, the National Latinx Outreach Director for Massachusetts Sen. Elizabeth Warren’s presidential campaign, was onstage to help introduce someone that many had come to see that night: Obama’s former HUD Secretary Julián Castro. It was Castro’s first campaign event with Warren after he endorsed her Monday, following his withdrawal from the presidential race. And the approximately 3,000 people in the theater wanted to see what that looked like for themselves.

Rae Williams and her friend James Martin attended the event to support Warren, but she wasn’t necessarily the one they were excited to see. “As a Black woman,” says Williams, who works in reproductive health care, “I feel like Julián Castro is one of the leading candidates on issues that affect people of color. For him to endorse her is huge for me.”

Even though she supports Warren, Williams had some misgivings. She pointed to Warren’s recent interview with Democracy Now, where she refused to criticize the ordering of the primary states, or challenge the system so that two of the whitest states in the country aren’t the center of candidate’s campaigns so early on in the election process. “Look, I’m just a player in the game on this one,” Warren told host Amy Goodman.

“She got a little snotty about that,” Williams notes. Castro, who’s been outspoken in his criticism of the primary order, eases Williams’ worries and helps her “feel more comfortable” with the Senator.

Martin, a 34-year-old actor and tech worker, echoed Williams’ points about Castro’s ability to bridge the gap between minority voters and Warren. “As ethnic minorities [our identities are] so intrinsically tied to our economics,” he says. “He gets that, he talks that, he walks that, he is that—and so I think he’s going to bring that to the table.”

When Castro took over the mic, he explained his endorsement with one simple statement: “Elizabeth Warren is the candidate who can unite the entire Democratic party.” He noted that while campaigning he noticed a recurring trend: Voters liked him, but he was always second tier to the Massachusetts senator. “You find that she has the best damn organization in these early states,” he said.

Valerie Miller, a 29-year-old paralegal in training, is also excited about Castro. “He is someone who has been consistently speaking up on behalf of underprivileged groups, minorities, and underrepresented peoples,” she says. “I think the fact that she has attracted his support means that he thinks that she is someone who can listen to him and work with him, and try to get the interests of those people to come to the forefront.”

After Castro’s introduction, Warren started by introducing herself and then hitting hard on the corruption of politics by big banks and big money. She outlined her vision of a Warren administration by describing three distinct plans: One to stop corruption, another to reform and rebuild governmental systems and structures, and the third to preserve a democracy through rolling back decades of voter suppression laws. She took a swing at certain Democrats for “backing off from big ideas,” to which an audience member shouted, “Mayor Pete!” The audience laughed. “I didn’t hear that,” Warren said smiling.

“I’m here to give her a chance to change my mind,” says Lee Silverman, a 47-year-old small business owner who attended the event with Teri West. “I’m not sure Warren can win Florida, Pennsylvania, Michigan, Ohio, and that is basically the entire race.” West, 56, has another concern: “I think she’s a little too far left right now for American mainstream, and we really need somebody who can appeal to more of the moderates.”

Castro’s endorsement of Warren is her most high profile political, endorsement yet. While the former San Antonio Mayor’s campaign never really got off the ground, Castro is one of the most high-profile Latinx politicians in the country and ran a progressive campaign that caught the attention of many Democrats. “He just has been such a strong proponent for what he represents, diversity-wise,” says Martin. “Him teaming up with Warren just absolutely excites me.”