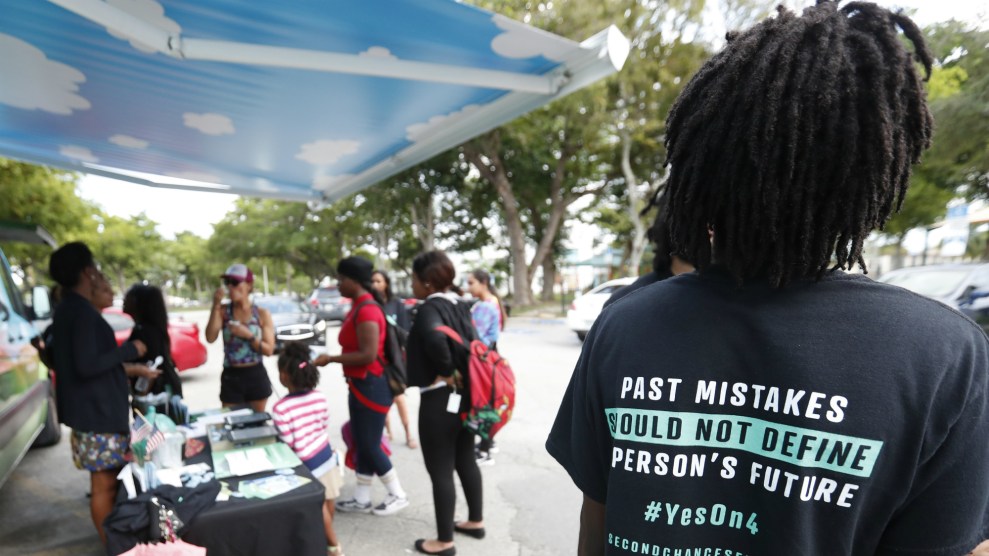 People gather around the Ben & Jerry's "Yes on 4" truck as they learn about Amendment 4 and eat ice cream in Miami in October 2018.Wilfredo Lee/AP

In 2018, Florida voters approved a ballot initiative restoring the right to vote to ex-felons. On Thursday, the state’s highest court said that right should be taken away from many of them.

The Florida Supreme Court issued an advisory opinion Thursday that felons must first pay certain fines and fees before gaining access to the polls. The decision is not legally binding but could influence future rulings by federal judges and put the reenfranchisement of potentially 1.4 million Floridians at risk.

After the 2018 passage of Amendment 4 to restore voting rights, Florida’s legislature quickly fought back—passing a bill that would bar people with felony records from voting until all of their court fines and fees are paid. It was compared to a poll tax.

The #Florida Supreme Court issued a decision this morning permitting a modern-day poll tax and redefining the voter-approved #Amendment4. https://t.co/rwMtikCIyN

Republican Gov. Ron DeSantis signed the bill into law. He then asked the state Supreme Court for guidance amid potential lawsuits. On Thursday, the court said Amendment 4’s language means felons must pay fines and fees associated with their sentencing documents before voting. It also said voters could change this by passing another measure with language clearly stipulating that the payment of fees is not a precondition for voting.

The opinion hinges on the amendment’s language concerning “completion of all terms of sentence,” wrote the Court, which determined that it “plainly encompasses” paying fines and fees from sentencing.

But voting rights advocates say this misses the point. Paying off hundreds and thousands of dollars in debts from time in the criminal justice system can be nearly impossible for those reentering society, particularly with rapidly accumulating interest.

As Ari Berman reported in a deep dive on Amendment 4, disenfranchisement has been a long-running problem in Florida:

Felon disenfranchisement has helped [former governor and current senator Rick] Scott and other Florida Republicans remain in power. Of the ex-­felons granted clemency under [Charlie] Crist, 26 percent, or 40,000, registered to vote in the 2012 election, with 59 percent registering as Democrats, according to research by University of Pennsylvania professor Marc Meredith and Harvard doctoral candidate Michael Morse. In 2016, Trump defeated Hillary Clinton by 113,000 votes in Florida, but 500,000 African Americans were unable to vote. African Americans who did vote in Florida favored Clinton by a 76-point margin.

Voting rights groups sued the state after DeSantis signed the bill requiring payment of fees, and those cases are ongoing. But this advisory opinion will bolster the state’s argument that felons who have not paid fines and fees cannot vote.