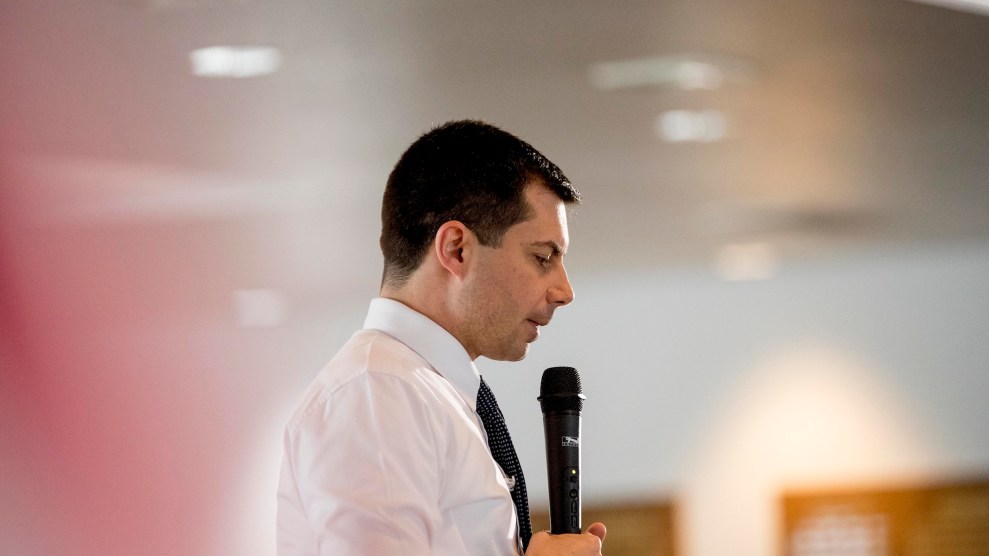 Before Pete Buttigieg launched into his remarks in Osceola, Iowa, on Tuesday, he wanted to let the crowd of a hundred or so at the county fairgrounds event center know that he’d been there before. Well, not there at the event center, specifically—though he also wanted them to know that his husband, Chasten, standing in the back of the room, was a trophy-winning 4-H participant—but the small town itself, in rural Clarke County, about halfway between Des Moines and the Missouri state line.

“I spent New Years in 2008 right here in Osceola, and we were volunteering, knocking on doors, a couple of us, for a young man with a funny name,” he said. “We were here when Iowa got the world’s attention when Barack Obama won here and started on the pathway to win the nomination.”

Hmm—maybe you’ve heard of him? At this point, voters already knew the story. A few minutes earlier, they’d heard it from the chair of the county party, who introduced the former mayor of South Bend. Maybe they’d also read his recent interview about it in the Washington Post. (Come for the rare photo of Buttigieg wearing something other than a white dress shirt and blue tie; stay for the anecdote about his car going into a ditch.) Or maybe they’d heard him tell it at the state Democratic Party’s Liberty and Justice Coalition Dinner in November. In the run-up to the caucus, Buttigieg is going all in on the Obama comparison, asking voters to remember 2008, ruminating about the meaning of “hope,” and floating the chance to “make history one more time.”

Obama has hovered over the 2020 field like a thick fog, a nebulous presence that candidates (or their supporters) can lay claim to but never quite wield as their own. Kamala Harris was the “female Obama” and Cory Booker “Obama 2.0,” though in retrospect, no they were not. Joe Biden, of course, was literally next in the line of succession to Obama at one point, and refers back to his work with “Barack” so often it’s almost a gulp word in his remarks. But Obama has not endorsed Biden, and Biden, for his part, has said he does not want Obama to endorse him, and in any event, Biden spent the run-up to the history-making 2008 caucuses knocking on doors for Joe Biden.

At the same time, the primary has forced an extended conversation about the 44th president’s legacy. During an early debate, for instance, Biden framed arguments for Warren’s and Sanders’ Medicare for All proposals as an attack on the previous administration. “The senator says she’s for Bernie,” Biden said of Warren. “Well, I’m for Barack.” Biden has relished the role of defender of Obama’s policies, at one point telling a debate moderator that a comparison between Obama’s deportation regime and Trump’s was “close to immoral.”

The policies are only a part of it. One thing Buttigieg is currently lacking is Obama’s coalition of supporters: A nationwide poll Tuesday found him with zero-percent backing among African American voters, and while his message of generational change is quite popular among white senior citizens, it’s had considerably less traction among people of his actual generation. But Obama 2008 was also about a feeling—and that feeling, more than anything, is what Buttigieg is trying hard to remind voters of in the closing week. As he wrapped up his remarks in Osceola (and again, a few hours later, in Indianola), Buttigieg returned rhetorically, if not by name, to the campaign he had opened with, only this time, the skinny young man with a funny name was him:

I’d like to close by pointing out the role of hope at a time like this. And I know hope is an odd word to use given that it fell out of fashion in our politics, because of how weak and divided our climate is in Washington, but I also think it takes a bit of hope to get involved at all. And I also think there’s a reason why, on the news, they took the word “hopeful,” turned it into a noun, and used it as another word for “candidate.”

…So I’m urging you to bottle up whatever hope compelled you into this room and made you think it was worth spending part of your Tuesday to be here right now. And if everybody does that, everybody we’re talking to…this coming Monday we are gonna make history one more time in a state that has a history of changing expectations—that did it that night a few days after I was experiencing Osceola New Year’s for the first time, and changed what America thought a nominee could be.

It’s not exactly subtle. But hey, it’s worked before.