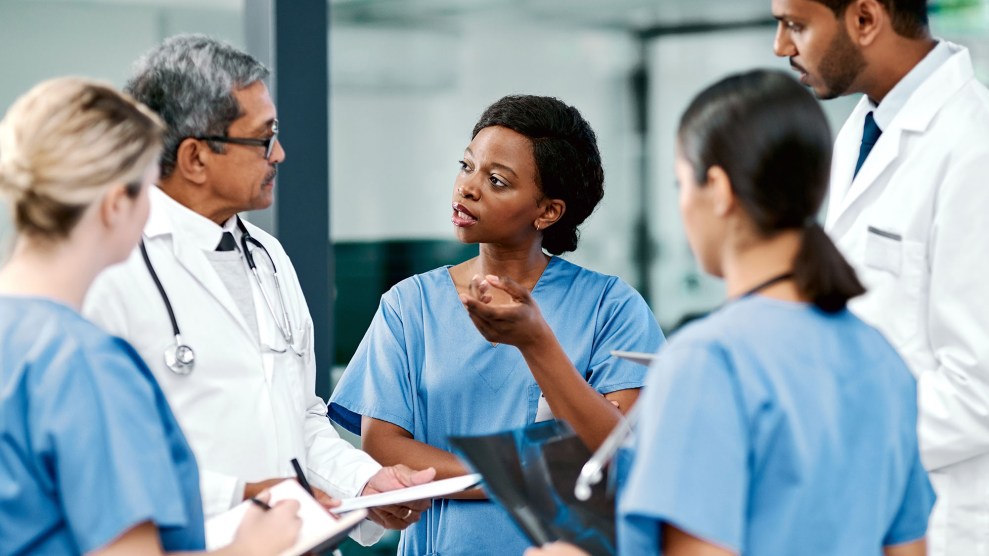 When the Supreme Court ruled that women have a constitutional right to abortion 47 years ago today, individual states began to legalize and regulate the procedure, and most did so with what probably felt like a crucial, beneficial, and even obvious caveat: Legal abortion must be provided by a physician.

But today, this restriction, which was largely meant to protect women from the sort of horrific malpractice that took place before abortion was legalized, is a significant impediment to widespread and safe abortion care. This is a key argument in the forthcoming book, Obstacle Course: The Everyday Struggle to Get an Abortion in America, in which authors David Cohen and Carole Joffe make a compelling case that broadening abortion access relies on expanding who can provide this kind of medical care.

“I think people misunderstand how [abortion] could be regular medical care, in the sense that nurses, midwives, and doctors can all perform this procedure,” Cohen tells Mother Jones.

Last year, Rebecca Grant wrote in Mother Jones about how it makes sense, now more than ever, to expand the range of abortion practitioners:

After the Supreme Court’s 1973 Roe v. Wade decision, every state, with the exception of Vermont, banned anyone except physicians from performing abortions. The restrictions were seen as necessary to edge out “back-alley” providers. But two medical advances over the 46 years since the ruling have made abortion both safer to get and easier to provide. The first was aspiration abortion, a procedure popularized in the ’70s that uses suction—as opposed to scraping, or “curettage”—to pull the pregnancy out of the uterus. The second was the development of the medication abortion method, a two-pill protocol that terminates early pregnancies and simply flushes the menses out of the body.

Together, medication and aspiration abortions, which are only performed in the first 10 or 16 weeks of pregnancy, respectively, make up the vast majority of terminations every year and have a serious complication rate of less than half of one percent. They’re also not exceptionally complicated to perform.

Part of the issue here is that there are, of course, a limited number of physicians in the United States to begin with, and some of them refuse to provide abortion care due to religious beliefs. This can be particularly harmful for rural women who typically live hours away from the nearest clinic.

As Cohen and Joffe point out in Obstacle Course, there are some states that already allow non-physicians to perform abortions. Last year, as Grant also covered, Maine passed a law that permits nurse practitioners, physician assistants, and other qualified medical professionals to administer medication abortions or in-clinic procedures. Sixteen other states and the District of Columbia also allow physician assistants to perform medication abortions, and five states allow them to perform the other dominant form of first-trimester abortion, aspiration abortion.

On the other end of the spectrum sits Mississippi, which has a state law that not only stipulates a licensed physician must administer abortion care, but that the physician must be an OB-GYN as well. Thirty-two other states also have physician-only laws in place.

“We’re not arguing for the lack of regulations here or lack of government oversight; we’re just saying is that this should be treated like normal medical care with the same kind of oversight that the medical profession has for any other medical procedures that apply to abortion,” Cohen says. “And when it is that way, the difference is just huge for the people who are able to access care in a more dignified way, without interference from the government.”

Beyond the physician restriction, Joffe emphasizes that another significant obstacle to abortion care is simply the costs. 75 percent of abortion patients are either below the poverty line or just barely above it, she says, and even an early medication abortion can cost around $500 (though some places charge more than that) and the most common second-trimester procedure can cost up to $3,000. What’s more, additional indirect expenses required to navigate restrictions, like waiting periods, add up quickly. “Wrapped up in costs is not just the cost of the procedure, but also the cost of getting to a clinic, the cost of child care for the 60 percent of patients who are already parents, the cost involved in taking time off from work to get a procedure,” Cohen adds. While providers often work to keep costs as low as possible, and abortion funds across the United States help their clients fill in the gaps, poverty is the sort of complicated challenge that cannot be fixed with a few funds and creative budgeting. Mississippi is a more severe case on this front, as I’ve written about before.

In the meantime, consider that part of the reason Maine was able to pass physician assistant legislation in the first place was that the legislature flipped for a Democratic majority in the midterms. November is just nine months away.