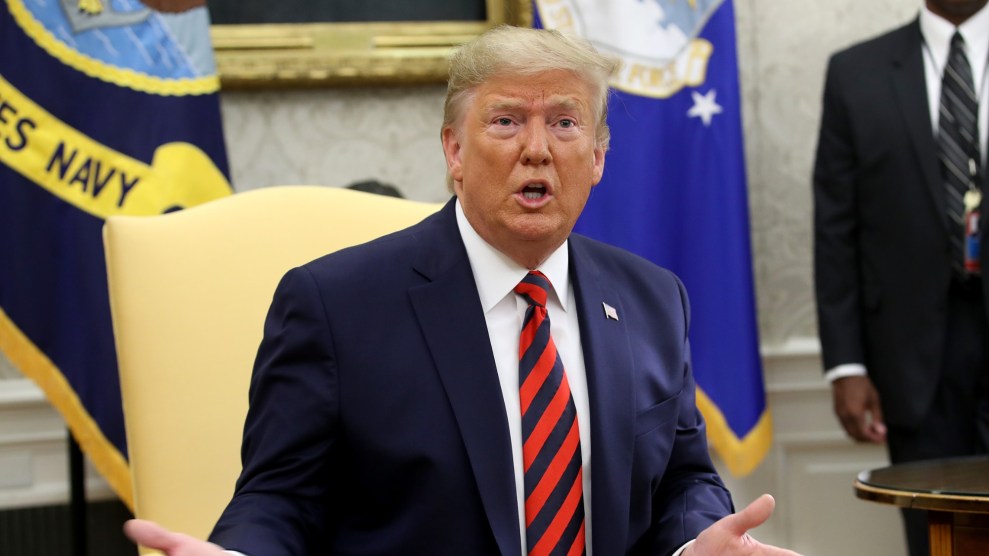 Three days before an American drone assassinated one of Iran’s top generals, the White House bragged in a press release about spending $25 million overseas “to protect religious freedom, religious sites and relics.” Over the weekend, President Donald Trump thoroughly undermined that boast by threatening, via his favorite platform, to eradicate 52 Iranian sites, including some “important to Iran & Iranian culture.”

Striking a cultural site that has no military value is, of course, a war crime, a fact that Secretary of Defense Mark Esper sheepishly acknowledged Monday. For State Department officials who are familiar with its preservation work, the threat was baffling. “I cannot even generate a response,” one department official told me. “The level of hypocrisy in this [tweet] is quite high.”

….targeted 52 Iranian sites (representing the 52 American hostages taken by Iran many years ago), some at a very high level & important to Iran & the Iranian culture, and those targets, and Iran itself, WILL BE HIT VERY FAST AND VERY HARD. The USA wants no more threats!

On Monday, Trump doubled down on his original threat, saying of Iran, “They’re allowed to use roadside bombs and blow up our people. And we’re not allowed to touch their cultural sites? It doesn’t work that way.” By Tuesday, he had reversed himself slightly, saying, “If that’s what the law is, I like to obey the law,” and in a televised statement from the White House on Wednesday, he appeared to back away from any further attacks.

As a moment of macho brinksmanship on Twitter, Trump’s tweet was of a piece with other strange threats he’s hurled at foreign leaders, from telling North Korea’s Kim Jong Un that he had a “much bigger” nuclear button to sending an all-caps warning (“BE CAUTIOUS!”) to President Hassan Rouhani of Iran. Destroying cultural property invites far different concerns, in addition to the obvious ones.

Targeting cultural sites would contravene a treaty signed by the United States and more than 100 other countries at the Hague in 1954 and constitute a war crime. It would also unravel—or at least strongly rebut—one of his State Department’s signature efforts under Secretary of State Mike Pompeo. With Trump’s blessing, Pompeo has increasingly prioritized religious freedom and protections for religious minorities as key planks of American foreign policy. At the United Nations in October, Trump unveiled a $25 million plan to protect “religious sites and relics” around the world, which the White House later listed among Trump’s accomplishments. 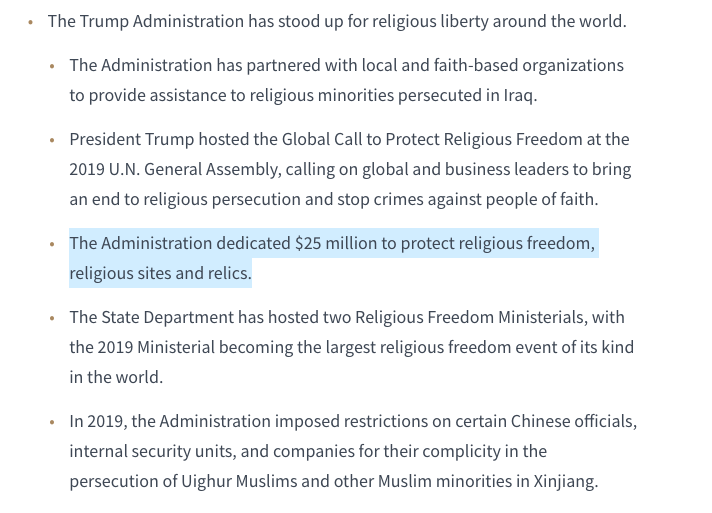 It’s not clear yet how this money will be applied, but if even some of it goes toward preserving historically vital religious sites, it would represent a dramatic increase in the State Department’s cultural preservation efforts. Currently, the department receives $6.25 million in funding each year from Congress as part of a program it administers to sponsor research projects to protect at-risk religious and cultural sites, usually in countries recovering from war or natural disasters. Last year, for one such project, a University of Pennsylvania research team received $2 million for a 40-month project in Mosul to preserve churches, mosques, and other heritage sites in the aftermath of the bloody battle to retake the Iraqi city from Islamic State control.

State Department employees have increasingly soured on Pompeo even as morale has risen broadly across the agency, which endured a brutal hiring freeze and high levels of turnover under Trump’s first secretary of state, Rex Tillerson. Pompeo’s fixation on Iran and his “drumbeat for war” have only hurt his standing, the official told me. Now the department risks undermining more staffers with a threat aimed at demolishing the same kinds of cultural relics the department has spent millions to protect across the Middle East. A spokesperson for Pompeo declined to comment on whether Trump’s threat undermines the preservation work being sponsored and funded by the agency.

Even if Trump were to carry out his threat, it’s not clear which 52 locations he had in mind. Iran has 24 sites on the UNESCO World Heritage list, including the Golestan Palace, the ruins of Persepolis, and the Bazaar of Tabriz. The 52 locations, picked seemingly to represent the number of American hostages taken by Iranian revolutionaries in 1979, might actually just be conventional targets that Trump mistakenly portrayed as culturally significant. An administration official told the New York Times on Monday that “none of those targets qualified as cultural sites.”

Pompeo and Trump adviser Kellyanne Conway couldn’t seem to make sense of Trump’s comments either as they took turns defending him. Pompeo falsely said on Fox News that Trump never actually threatened to destroy cultural sites, while Conway told reporters outside the White House that many military and strategic sites within Iran “are also cultural sites” but refused to elaborate.

None of this provides any clarity on a policy that, theoretically, Trump as commander in chief could unilaterally order. Esper admitted Monday at the Pentagon that “the laws of armed conflict” prohibit targeting cultural sites, but Trump has shown plenty of times how willing he is to bypass the Defense Department in support of war criminals. In November, Navy Secretary Richard Spencer was fired over his response to Trump’s controversial plan to restore the rank of a disgraced Navy SEAL who had been accused of murder during a deployment to Iraq. Going back to the 2016 campaign, Trump praised waterboarding as an effective interrogation tactic and mused about killing the families of suspected terrorists—making his threat to order a different form of war crime against Iran all the more plausible.