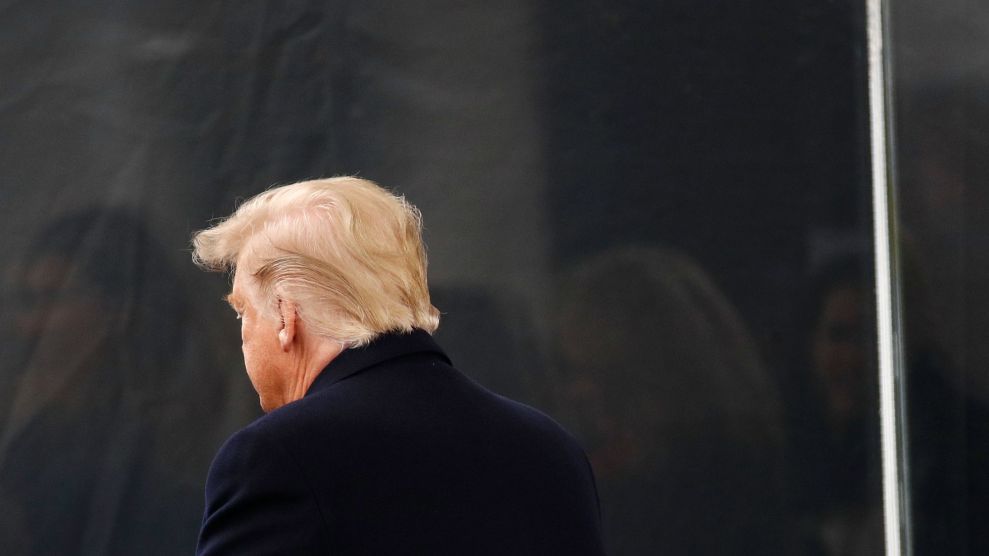 The number-one super-PAC for Donald Trump, which is expected to raise tens of millions of dollars to help re-elect him this year, has come up with a nifty fundraising gimmick: the “Witch Hunt Timeline”. This interactive chronology supposedly details “the road to a sham impeachment” to show how a phony Russia scandal turned into a phony Ukraine scandal that turned into a phony impeachment. But this is a highly selective timeline, and in a bout of Trump-sized chutzpah, America First Action leaves out at least one crucial episode: its own role in the Ukraine scandal.

In a fear-mongering email seeking donations, the super-PAC claims that Trump is a victim of a nefarious and wide-ranging plot, insisting that “federal law enforcement officers, intelligence agencies, and government bureaucrats engaged in a shocking effort to influence the 2016 election, crush the Trump campaign, and cripple our elected president.” The timeline, it asserts, “follows the genesis and development of the deep state’s Witch Hunt against President Donald J. Trump, a monstrous conspiracy against the American people and the American system of government.” Yeah, that again—and it’s part of another rightwing buck-raking scam.

This alternative-reality con job is not being mounted by a group of GOP schmoes or wannabes. This super-PAC is run by the the cream of Trump World. It is chaired by Linda McMahon, who was Trump’s pick to run the Small Business Administration. Its senior adviser and spokesperson is Sean Spicer, Trump’s first White House press secretary. Kelly Sadler, formerly a senior Trump White House official in charge of coalitions outreach, is the communications director for the group. Steve Cortes, another adviser for this super-PAC, has been a member of Trump’s Hispanic Advisory Council.

It raised $39 million for the 2018 elections to support pro-Trump Republicans, and in Trumpistan, it is the Trump-approved place to go for donors who want to give big-bucks for Trump’s reelection. It had over $10 million cash in the bank as of last June, the latest data available. But that amount will likely swell by several times as the election approaches. As a super-PAC, it is supposed to act independently of Trump’s official reelection campaign. But its affiliated non-profit, America First Policies, which last month announced it was spending $2 million on anti-impeachment ads, was cofounded by Brad Parscale, who is now Trump’s campaign manager.

The timeline ignores many significant moments of Trump’s Russia and Ukraine scandals. Gone are key contacts between the Trump campaign and Russians in 2016. There’s nothing on Trump’s secret endeavors during that campaign to score a deal in Moscow to develop a tower that could earn him hundreds of millions of dollars (while telling voters  he had “nothing” to do with Russia). Trump’s denials that Russia was attacking the US election? Nope, not there. The release of Russian-stolen Democratic emails just when the grab-them-by-the-pussy tape emerged? They forgot that, too. The timeline neglects to mention that the US intelligence community concluded Moscow attacked the 2016 election in part to help Trump win the White House. (Interest declared: the timeline does note the story I posted on October 31, 2016, that first revealed the existence of what would become known as the Steele dossier and that disclosed the FBI’s interest in the allegations they contained. Somehow, presumably, that was part of a Deep State operation.)

The timeline indicates this Trump super-PAC suffers from selective amnesia. Especially regarding one incriminating incident.

In October, two Soviet-born American businessmen who were working with Rudy Giuliani to dig up dirt on Joe Biden in Ukraine, Lev Parnas, and Igor Fruman, were indicted for violating campaign finance law by allegedly creating a dummy company to provide cover for large donations they were making to Republicans. One of the payments cited was a hefty $325,000 contribution made in May 2018 to…the America First Action Super-PAC. And here’s where it gets truly interesting: The indictment, issued by a US attorney in New York City, notes that this donation and others the pair slipped to Republicans “were made for the purpose of gaining influence with politicians so as to advance their own personal financial interests and the political interests of Ukrainian government officials, including at least one Ukrainian government official with whom they were working.”

So Parnas and Fruman were allegedly using the America First Action super-PAC to do the bidding of Ukrainian officials. How did this work? The indictment explains that during the 2018 election, the America First Action Super-PAC  spent $3 million to help a member of Congress referred to as “Congressman-1” who was running for reelection, and it implies that the $325,000 donation was related to this particular effort. The indictment states that Parnas and Fruman also contributed directly to “Congressman-1,” who has been identified as Pete Sessions, a Texas Republican. Moreover, the feds point out that during this stretch, Parnas met with Sessions and sought his “assistance in causing the U.S. Government to remove or recall” Marie Yovanovitch, the US ambassador to Ukraine, “at least in part, at the request of one or more Ukrainian government officials.” In fact, on the day that Parnas met with Sessions in the US Capitol, the congressman sent a letter to Secretary of State Mike Pompeo urging the firing of Yovanovitch. And around that time, Parnas and Fruman had an intimate dinner with Trump during which they claimed that Yovanovitch was bad-mouthing him—to which Trump replied, “Get rid of her!…Take her out.” A year later, Giuliani and others would push for Yovanovitch’s ouster as part of their campaign to gather mud to throw at Biden. (Sessions lost his reelection bid in 2018, and this year he is running for a US House seat in an adjacent district.)

The indictment paints a clear picture: Parnas and Fruman were dropping lots of money on Republicans to buy influence so they could do dirty work for one or more Ukrainian government officials and nail a US ambassador who was seen as an impediment to the Biden-dirt-digging operation, which relied upon past and present Ukrainian officials who were widely considered corrupt. And the pair apparently used America First Action to get close to Sessions and to accomplish this mission. Sadler, the spokesperson for America First Action, has said there was no agreement that the money from Parnas and Fruman would be used to support Sessions. (Sadler did not respond to a request from Mother Jones to explain why this matter is missing from the timeline.)

The Sessions scheme was an early step in the anti-Yovanovitch campaign that would be waged by Parnas, Fruman, Giuliani, and other Trump associates. And that effort has been a critical piece of the Ukraine scandal and Trump’s impeachment. It was investigated by the House, much discussed at the House impeachment hearings, and extensively cited by the Democratic impeachment managers during their presentations at the Senate trial this week. It’s not a hoax, not a sham.

Yet when the America Action crafted this impeachment timeline, it did not include the Parnas and Fruman donation to the PAC or any reference to how the super-PAC itself was exploited by these indicted Guiliani associates as part of an underhanded scheme to secretly influence Washington for the benefit of shady Ukrainian officials. (The timeline also has no data point for the Parnas and Fruman indictment in October, but it does note that CBS that month was beginning production on a miniseries based on former FBI director James Comey’s book.) This is reality-denying revisionism.

Yes, America First Action, the Ukraine scandal is real, and you know that because you were involved in the caper. But the goal here is to squeeze money out of Trump-loving donors on the PAC’s email list. That is, to follow the lead of Trump himself and con them by playing up the false narrative that there’s nothing to Trump’s Russia and Ukraine scandals and by depicting Trump as the innocent target of an evil cabal. This timeline is rank disinformation, designed to scam and to serve Trump first.