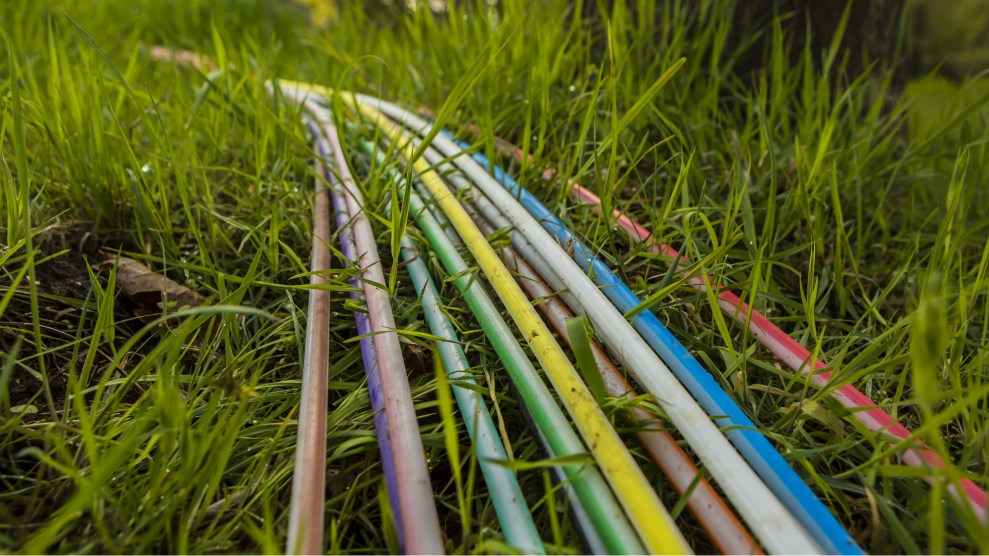 This story was originally published by ProPublica, a nonprofit newsroom that investigates abuses of power. Sign up for ProPublica’s The Big Story newsletter to receive stories like this one in your inbox as soon as they are published.

The timing seemed perfect. Muncy’s contract as a nurse at the Department of Veterans Affairs hospital in Lexington had ended, and she wasn’t ready to retire. With an annual salary of $77,000, Muncy would have enough money to help her daughter pay for medical school.

But the position required high-speed internet access, which Muncy didn’t have on her farm, an hour’s drive from Lexington, the state’s second largest city.

So, Muncy gave up the job. She hasn’t found another since.

“I realized there was no hope for us,” said Muncy, 64, who after losing the position wrote a letter to state lawmakers begging them to move quickly on a plan for broadband access in rural communities. Muncy hoped to spare other residents the helplessness she felt when she was forced to turn away employment.

KentuckyWired, the much-heralded plan to improve internet connectivity across the state, promised to create financial opportunities through reliable, high-speed internet access for rural communities that have repeatedly been hammered by the loss of jobs in the coal and tobacco industries.

But the project is stalled and its future looks increasingly bleak because of a number of missteps by state officials and Macquarie Capital, the Australian investment bank managing the ambitious plan, the Louisville Courier Journal and ProPublica have reported.

In the next few months, the state’s new governor, Andy Beshear, will have to make key decisions on the direction of KentuckyWired, which is already two years behind schedule and could cost $1.5 billion over the next 30 years.

Beshear, a Democrat who was elected in November, has repeatedly declined to say what he plans to do as impatient lawmakers threaten to block funding. A spokeswoman for his office said he is still receiving briefings and information related to the project, which began under the gubernatorial administration of his father, Steve Beshear.

Meanwhile, the project that promised so much to residents in rural communities has yet to deliver, and it’s unclear if and when it will.

“It’s becoming a pretty dire situation for some folks here who had hoped to build businesses around access to high-speed internet,” said state Rep. Angie Hatton, a Democrat who represents Letcher County, where the median household income is about $30,000 annually and 31 percent of the population lives in poverty.

Rural Kentucky Keeps Getting Left Behind

Rural Kentucky has long grappled with crippling poverty and high unemployment rates. In 2020, 38 counties in eastern Kentucky were deemed economically distressed by the Appalachian Regional Commission.

The state’s ambitious broadband internet plan was not meant to solve all the needs in rural communities. Still, state leaders said it would help bring a wave of high-tech jobs to the region and provide residents better opportunities to start their own businesses given the lack of companies investing in such areas.

But residents, some of whom don’t know about KentuckyWired, are still waiting.

Erica Scott, a mother of two who lives in Defeated Creek, a tiny community in rural Letcher County, said the unavailability of high-speed internet makes it difficult to run her online business.

Scott said it can take hours to download the designs she needs for the T-shirts and candles she sells online, slowing production and delivery to customers.

The satellite internet service she has isn’t even fast enough for her children to access their schoolwork from home via Google Classroom, a web application teachers use to post assignments and communicate with students. They’ve had to get special permission to complete their homework on paper during snow days, which further hamper already spotty internet.

“We’re not the only ones,” Scott said. Still, she added, in Kentucky’s mountain hollows, or hollers as they are known, “it’s a real job to get internet.”

One in 11 Kentuckians—roughly 405,000 mostly rural residents—have no wired broadband service in their area, according to Federal Communications Commission data. For those who do have internet access, it’s either too slow or simply unaffordable.

KentuckyWired’s new proposed completion date is nine months away. Even if the state meets that deadline, many rural residents won’t have immediate access to broadband.

The project is installing fiber-optic cable that will bring broadband to state agencies across Kentucky, but in order for individual homes and businesses to tap into the new network, third-party providers still need to hang the so-called last mile. And many of those providers are reluctant to make plans without first knowing how much the state’s private-sector partner, Macquarie, will charge for access to the network.

“That might be another 10 years or 20 years while all that last mile stuff gets built,” said Doug Dawson, a telecommunications consultant based in North Carolina.

The wait may be too long for Mike Joseph, a lifelong resident of Yeadiss, an unincorporated community in rural Leslie County.

Joseph, 55, said after his father purchased a house in London, Kentucky, he no longer had family in the area. His wife of 18 years suggested that they move to Harlan in southeastern Kentucky near the Virginia border, where they own a rental property and where broadband is available.

“That’s the deciding factor on us moving, better internet,” said Joseph, a maintenance and IT supervisor at the Leslie County jail, which relies on the internet for communication and pays nearly $1,700 per month for a sluggish connection.

It’s money that could be used for better vehicles and better salaries, Joseph said.

Engle said he spent tens of thousands of dollars to do so while he awaited the opportunity to tap into the network.

But Engle said he was forced to sell his business last year at a $340,000 loss after the state blew past its July 31 completion deadline.

“The state failed me,” Engle said.

Uncertainty over the plan for KentuckyWired has lawmakers clamoring for action from the governor as they field questions from frustrated rural residents.

State Sen. Jimmy Higdon, a Republican from Lebanon, said the rural residents he serves regularly request that his office help improve internet service in their communities.

KentuckyWired was the state’s bet for catching up.

Project managers are asking lawmakers to approve $100 million for KentuckyWired this legislative session, an increase of $28 million from the previous budget.

It’s not the current request but the skyrocketing price tag, which is 50 times the cost originally quoted to taxpayers, that worries state Rep. Robert Goforth.

“I mean, $1.5 billion is a considerable amount of money that these folks sent us to Frankfort and entrusted us to spend wisely and do the best job we can with it,” Goforth, a Republican from East Bernstadt, said. “Someone dropped the ball here, and we need to figure out what we can do to make the best of a bad situation.”

Andy Beshear, much like Matt Bevin, a Republican who served as the state’s top official before him, has offered no solution.

“Unless somebody in the Beshear administration can come up with a plan to save it—a viable plan, a workable plan—and somebody steps up and says this will work, I don’t see us funding something that’s going down a dead-end street,” Higdon said.

Some lawmakers fear that cutting off funding for KentuckyWired will be more expensive in the long run. Others are ready to kill the project.

“What do they say? Fish or cut bait?” said state Rep. Lynn Bechler, a Republican from Marion and one of KentuckyWired’s harshest critics. “Well, it’s no longer fishing. Let’s cut the bait.”

While at a “hog kill” in Defeated Creek, Roger Fields said delays in getting high-speed internet have slowed promises for relief as jobs continue to disappear in his community. But the 66-year-old former coal worker was focused on a more pressing issue, ensuring that he and his neighbors had enough meat for the winter.

In communities still waiting for high-speed internet, residents say they’ll just have to continue doing what they’ve always done: They’ll have to depend on each other.

“Wouldn’t want to live no other place, though,” Fields said as he carved up a warm pig’s head while others hacked away at a torso dangling from a nearby tractor. “Look what neighbors we’ve got. See all this work. For this, they don’t charge nothing.”