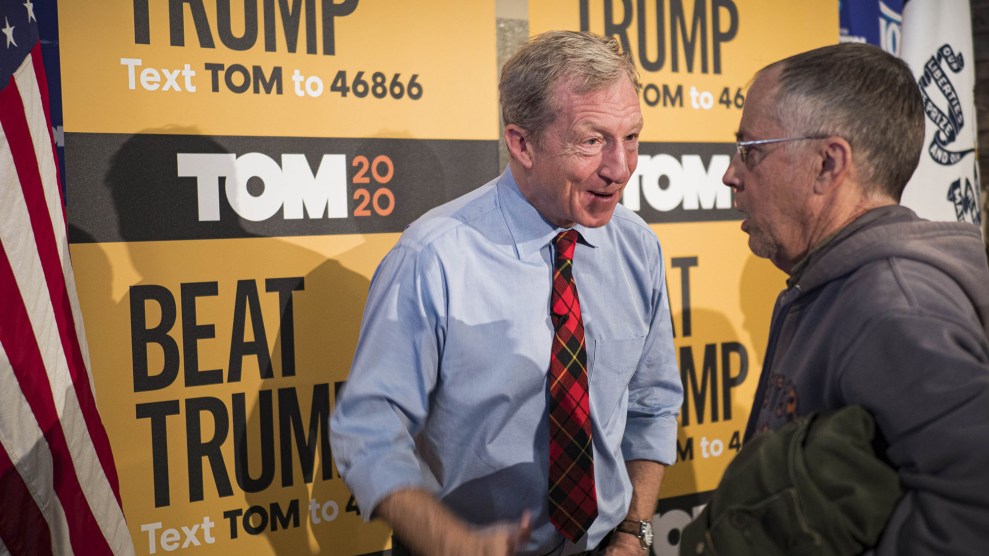 With less than a week to go before the Iowa caucuses, four Democratic presidential contenders are stuck in the Senate chamber in Washington, DC, for Donald Trump’s trial. But there’s one candidate who’s free to traverse the Hawkeye State and brag about his role in impeachment.

At a pair of events in southern Iowa Wednesday, Tom Steyer—the billionaire activist-turned-candidate—boasted that Need to Impeach, the group he founded shortly after Trump was elected, had helped spark the events now taking place in the Senate. “I truly believe those eight-and-a-half million people pulled Washington, DC, into doing the right thing and holding the most corrupt president in American history [to] account,” he said at a coffee shop in Ottumwa, referencing the number of people who signed his petition to impeach Trump.

The Senate’s impeachment trial has caused headaches for Sens. Bernie Sanders, Elizabeth Warren, Amy Klobuchar, and Michael Bennet, requiring them to sit at their Senate desks six day a week, often late into the night—Wednesday’s session went past 11 pm ET. They’ve been forced, instead, to flood Iowa with surrogates. Warren, for example, hosted a “tele-town hall” for Iowans Tuesday night and has been sending her dog to take her place at campaign events.

Steyer doesn’t face those same restrictions, and his campaign events are geared far more toward directly opposing Trump than those of the other Democrats, who have often been more focused on selling their own plans. His campaign plasters bright yellow “Beat Trump” yard signs behind the spot where he speaks at events, and a pair of anti-Trump buttons—one reads “Impeached,” the other “Trump is a fraud & a failure”—looked just as popular at the front door as the “Tom2020” buttons.

Steyer, who—unlike in his wooden debate performances—is surprisingly engaging and lively at town halls, appears to take particular glee when he compares his own business record to the president’s. “I want to be on stage with Mr. Trump, because he’s a fake,” he said. “He played a businessman on a reality TV show, he’s not actually a businessman. Sort of like Thurston Howell the Third.”

Steyer has been a prominent funder of liberal causes over the past decade, launching NextGen Climate in 2013 and bankrolling activists across the country who are working to elect candidates who have promised to combat global warming. But he didn’t become a public figure for a general audience until 2017, when he launched Need to Impeach. Long before anyone had heard of the Ukraine scandal, he toured the country, advocating for the president’s removal from office. He ran pro-impeachment commercials in which he directly addressed the camera—those videos now live online on the same YouTube account as his official presidential campaign.

Now, he’s claiming credit, or at least partial credit, for the fact the Democrats in the US House voted to impeach Trump. “Over two years ago, I thought, ‘There’s something terribly wrong at 1600 Pennsylvania Avenue.’ And I started a petition drive; over eight-and-a-half million Americans signed that petition to say this guy has to leave office,” Steyer told a few dozen people at an Italian restaurant in Knoxville. “And they didn’t just sign a petition. They called their congresspeople. They wrote their congresspeople. They emailed their congresspeople. And I believe that’s why, in fact, Mr. Trump was impeached. I think those eight-and-a-half million dragged Congress into looking at his behavior as right and wrong.”

Steyer may indeed have played a role in helping channel liberal angst following the 2016 election—he put real money behind the widespread sentiment that Trump was unfit to stay in office. But as Vox’s Emily Stewart reported in November, by the time Congress actually took an interest in pursuing impeachment last fall, Need to Impeach had mostly withered away, with staff diverted to Steyer’s presidential aspirations—though the group did spend money on TV ads in December and, earlier this week, sent “Trump Cover-Up Participation Award” trophies to Senate Republicans.

Since he made his presidential campaign official last July, Steyer has tapped into his fortune, spending more than $47 million to blanket the airwaves with TV and radio ads in early primary states. He also took advantage of the email list he’d built up with Need to Impeach, as my colleague Russ Choma reported. The first thing I saw when I pulled my rental car out of the Des Moines airport Tuesday night was a digital billboard with a Steyer ad.

Those expenditures have paid some dividends. Steyer spent Wednesday boasting about a Morning Consult poll that showed him at 17 percent among Democratic voters in the first four primary and caucus states, behind only Biden and Sanders. That poll is likely an outlier—he’s averaging just 3.2 percent in Iowa, though he’s doing better in South Carolina, where he averages 8.3 percent. Still, he’s outlasted a string of big-name Dems, such as Cory Booker and Julián Castro. So even if Steyer’s money couldn’t quite buy an impeachment, it has certainly helped him maintain a spot on the debate stage.