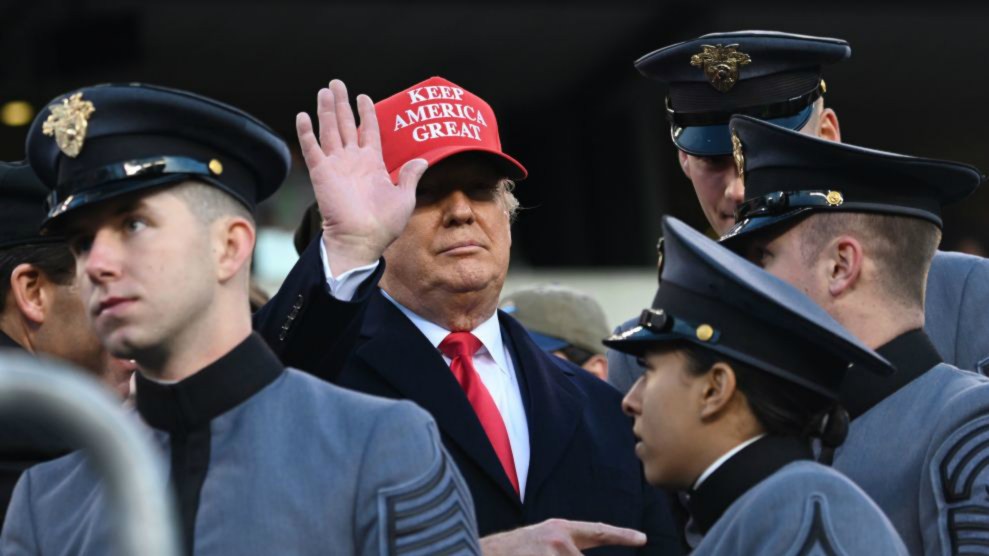 “The United States just spent Two Trillion Dollars on Military Equipment,” he tweeted on Jan. 5. “If Iran attacks an American Base, or any American, we will be sending some of that brand new beautiful equipment their way.”

Besides being wrong (the military has not spent that much), he repeated a mistake that military leaders have made for years: emphasizing weapons over the fitness of the men and women charged with firing them.

Over the past 18 months, ProPublica has dug into military accidents in recent years that, all told, call into question just how prepared the American military is to fight America’s battles.

If forced to fight in the Persian Gulf or the Korean Peninsula, the Navy and Marine Corps are likely to play crucial roles in holding strategic command of the sea and defending against ballistic missiles.

Those branches, though, do not need billions of dollars of new weapons, our examination revealed. They need to focus on the basics: its service members, their training and their equipment.

The Government Accountability Office, Congress’ watchdog, has been sounding the alarm for years, to little effect. In 2016, the GAO found that years of warfare in Iraq and Afghanistan had taken their toll: “The military services have reported persistently low readiness levels.”

In 2018, the agency focused on the Navy and Marine Corps. All seven types of aircraft it tracked, from cargo planes to fighters like the F/A-18D, had repeatedly missed goals for being prepared for missions. “Aviation readiness will take many years to recover,” the GAO said.

In a report last month, the GAO found that only about 25% of Navy shipyard repairs were completed on time. “The Navy continues to face persistent and substantial maintenance delays that affect the majority of its maintenance efforts and hinder its attempts to restore readiness,” it said.

The services’ problems with readiness burst into public view in the summer of 2017, when two American destroyers collided with two commercial ships in separate incidents that left 17 sailors dead and scores injured. They were the Navy’s worst accidents at sea since the 1970s.

Both the USS Fitzgerald and the USS John S. McCain were deployed to the 7th Fleet, based in Yokosuka, Japan. What both ships needed, ProPublica found, was more time to train and more sailors.

Neither ship was fully qualified for its battle missions; neither ship had a full crew; both ships had patched together navigation systems that failed to work at times.

Sailors on both ships described being shortchanged in training and exhausted by the pace of operations. One-hundred-hour work weeks were not uncommon.

On the Fitzgerald, for instance, a sailor had to manually press a button more than 1,000 times to refresh a radar screen tracking nearby traffic. On the evening of the collision on June 17, the Fitzgerald was under the control of a relatively inexperienced officer who ordered the destroyer to turn directly into the path of a cargo carrier.

On the McCain, the Navy had installed a touch-screen navigation system as a cheaper alternative to traditional steering wheels and throttles. The design of the new system was so confusing that the sailors using it accidentally guided the McCain into an oil tanker in the Singapore Strait on Aug. 21.

Dakota Bordeaux, the young sailor steering the ship, said of the new navigation system, “There was actually a lot of functions on there that I had no clue what on earth they did.”

It was not that the Navy was unaware of the problems. Top commanders had simply ignored urgent messages for help. Military leaders wanted missions completed. They cared less about whether the men and women on duty were forced to cut corners to do them.

In January 2013, Vice Adm. Thomas Copeman issued a warning at the Surface Navy Association Symposium, one of the premier gatherings of Navy officers in charge of warships. Readiness, he said, was headed toward a “downward spiral.”

“It’s getting harder and harder I think for us to look the troops in the eye,” Copeman told the audience.

“If you’re an admiral in the Navy,” he later told ProPublica, “you may have to make that decision to send people into combat, and you better not have blood on your hands the rest of your life because you didn’t do everything you could in peacetime to make them ready.”

The Navy’s surface forces needed $3.5 billion, he said, just to fix what was wrong with training alone. Copeman raised the specter of a “hollow” Navy without those additional funds.

“It’s sleepwalking into a level of risk you don’t realize you have,” she said to ProPublica.

The 7th Fleet, the largest of the Navy’s forward-deployed fleets, was perhaps most vulnerable. In 2017, top officers laid out the armada’s dire conditions for its senior commander, Vice Adm. Joseph Aucoin.

Training was down. Certifications, which crews received after proving they were prepared to handle crucial war-fighting duties, had dropped from 93% completed in 2014 to 62% in 2016. That year, only two of the fleet’s 11 destroyers and cruisers received all recommended maintenance. One ship got only a quarter of its scheduled upkeep.

Aucoin sent the assessment to the top brass. But the portrait of crisis got him nothing.

Low-level officers on the decks of ships and high-ranking leaders up the chain of command said they made similar warnings and were shut down. Scores of sailors reached out to us and testified to some combination of fear, lack of training and an absence of confidence in the Navy’s leadership.

“If the Navy paid more attention to the job satisfaction and intrinsic motivation of sailors, then a lot of these other systemic issues will fix themselves,” one sailor wrote.

We examined other Navy episodes directly relevant to today’s situation with Iran. In 2016, the crew of two American gunboats was seized in the Persian Gulf by Iran’s Islamic Revolutionary Guard Corps, the military force dominated by Qassim Suleimani, the major general killed by a drone strike outside the Baghdad Airport this month.

The sailors on the gunboats undertook a last-minute mission without proper training or equipment and were captured after straying into the waters surrounding an Iranian naval base on Farsi Island. An international incident was avoided only through military pressure and last-minute diplomatic maneuvers.

We also examined the state of the Navy’s minesweepers. The Persian Gulf is one of the few places in the world where such ships may prove indispensable. Nearly a quarter of the world’s oil supplies pass through the Strait of Hormuz at the gulf’s entrance. The Iranians have threatened to use mines to block it in case of conflict.

The Navy has fewer than a dozen minesweepers, many in disrepair. One sailor told us the sonar meant to detect mines was so imprecise that in training exercises it flagged dishwashers, crab traps and cars on the ocean floor as potential explosives.

“We are essentially the ships that the Navy forgot,” another sailor said of his own minesweeper, which had not left port in 20 months.

The Department of the Navy oversees the Marine Corps. And a Marine Corps aviation accident in December 2018 raised its own questions about readiness. A midair collision between a F/A-18D Hornet and a KC-130J Hercules fuel tanker over the Pacific left six Marines dead.

The same patterns showed up again: Local commanders had warned higher-ups of a lack of training, nonfunctioning aircraft and faulty equipment.

Squadron 242, whose fighter jets were involved in the accident, was designed to leap quickly into an attack against North Korea in case of conflict. The commander’s own reports showed the squadron was consistently not capable of completing seven of its 10 “mission essential tasks,” such as armed reconnaissance and traveling into enemy airspace to bomb known targets.

In commentary written in response to the findings of a safety board investigation after the incident, the commander for the tanker squadron, which lost five Marines in the crash, was unsparing.

“In an [area of operations] where the mantra of ‘Fight Tonight’ is repeated everywhere,” Lt. Col. Mitchell Maury said, referring to the Pacific, “we are not manned, trained, and equipped to execute to the appropriate level of effectiveness.”

In isolation, each of the events seemed an unfortunate accident—regrettable, to be sure, but not a cause for widespread alarm.

But our reporting showed a broad and alarming pattern. The Navy and the Marine Corps had routinely ignored their sailors and Marines, their equipment and their training. The result: men dying during peacetime.