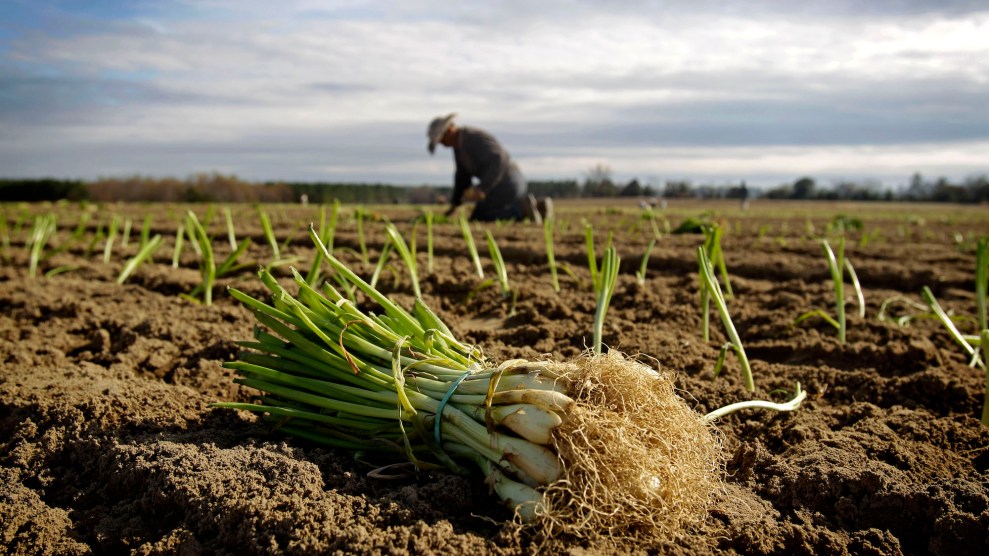 A worker plants Vidalia onions on a farm in Georgia. David Goldman/AP Photo

The Trump Administration finds itself in a tight corner on the topic of farm labor, a task handled by a largely foreign-born workforce. On the one hand, the president has made good on campaign promises to make life generally miserable for immigrants; and he employs a white nationalist on his senior advisory staff. On the other, the agriculture industry is experiencing labor shortages that are intensified by the immigration crackdown. Meanwhile, farmers in key electoral-college states, who overwhelmingly supported Trump in 2016, have already been expressing frustration over the administration’s export-killing trade wars.

US Department of Agriculture Secretary Sonny Perdue wants to square the circle. Now that the president has signed a preliminary trade agreement with China that could restart that country’s massive imports of US farm goods, Perdue signaled a pivot to labor earlier this week, according to an account of his remarks by Chris Clayton of the agriculture trade journal DTN. In a Q&A at the annual meeting of the American Farm Bureau Federation—an agribusiness-aligned insurance and lobbying outfit—the secretary said the administration was working on a “renewed and refreshed ag labor program,” because “if we don’t have people who can help us grow these things and harvest our products,” trade deals won’t matter.

What about the stubborn fact that farm workers are largely foreign-born? Here’s Clayton:

Perdue said he has been trying to persuade others in the administration “to separate immigration, which is people wanting to become citizens, with a temporary, legal guest-worker program.

“That’s what agriculture needs, and that’s what we want,” Perdue said. “It doesn’t offend people who are anti-immigrant because they don’t want more immigrant citizens here. We need people who can help U.S. agriculture meet the production.”

In other words, to appease “people who are anti-immigrant” while also increasing the supply of farm labor, Perdue wants to give farm owners increased access to a program that grants foreign workers temporary resident status without a path to citizenship.

But there’s a problem, Perdue added. Under the federal guest-worker program that has supplied US farms with labor for decades, known as H2A, there’s a mechanism that prevents farmers from paying guest workers wages below the prevailing rate in the surrounding area, which would undermine wages for other nearby workers well.

This “adverse effect wage rate,” calculated for each state by the US Department of Labor using USDA surveys, is just too high, Perdue insisted. “We’re kind of pricing ourselves out of business here,” he told the Farm Bureau meeting attendees, Clayton reported.

“We’ve insisted … that we have to do something with wage rates.” Perdue said the adverse wage rate has set almost a $15 minimum wage for agriculture, “and no other business in the country has that.”

According to the Department of Labor website, the adverse effect wage rate for 2020 is quite a bit lower than Perdue’s assessment in several southern states with labor-intensive farm industries—it’s $11.71 in Florida, Alabama, and Georgia (Perdue’s home state), and $12.67 in Texas. In the west coast fresh-produce belt stretching from California to Washington, though, Perdue’s depiction is accurate.

Quibbles aside, the ag secretary’s message is clear: He wants to increase the supply of temporary foreign workers with no path to citizenship, and he wants to cut their wages. “The adverse effect rate is an empirically derived average—what Perdue’s saying here is that he wants farmers to be able to pay their workers less than the prevailing wage in a given state,” said Bruce Goldstein, president of the advocacy group Farm Worker Justice.

Already, the H2A program gives employers tremendous leverage over guest workers, Goldstein added.  In a 2013 report examining the program’s impact in the South, the Southern Poverty Law Center concluded that guest workers are “routinely cheated out of wages, forced to mortgage their futures to obtain low-wage, temporary jobs, and held virtually captive by employers.” In her 2018 report from California wine country, Mother Jones’ Maddie Oatman found that guest workers there frequently live in isolation, often “prohibited from receiving visitors” at their farmer-supplied living quarters.

Goldstein added that $15 per hour might sound like a decent rate, but farm work is highly skilled, often temporary, and excluded from federal time-and-a-half overtime provisions.

And while their wages have risen slightly in recent years, farm workers still bring home average hourly rates less than 40 percent below of what other non-supervisory US workers make, said Daniel Costa, director of immigration law and policy research for the Economic Policy Institute. On average, farm workers earned $24,620 per year in 2018, according to the US Bureau of Labor Statistics. That’s below the federal poverty line for a family of four. Another source, the 2015-2016 National Agricultural Workers Survey, calculated that “farm workers’ mean and median personal incomes the previous year were in the range of $17,500 to $19,999. ”

By pushing cuts, “Purdue is shamelessly advocating for bringing in workers who can help farmers make a profit, as long as they remain disposable and powerless,” Costa said.

Perdue’s remarks at the Farm Bureau convention aren’t the first time he has used his platform to attack programs that benefit people living in poverty. The secretary repeatedly championed and helped push through changes to a key-anti-hunger program that will “cut off basic food assistance for nearly 700,000 of the nation’s poorest and most destitute people,” as my colleague Nathalie Baptiste recently reported.

And he also successfully advocated the rollback of Obama-era reforms that had make public school lunches healthier. According to a 2016 study from Baylor University researchers, the National School Lunch Program is essentially a “safety net for low-income children.” More than 20 million kids rely on it for nearly half their daily calories and 40 percent of their vegetable intake, the study found.