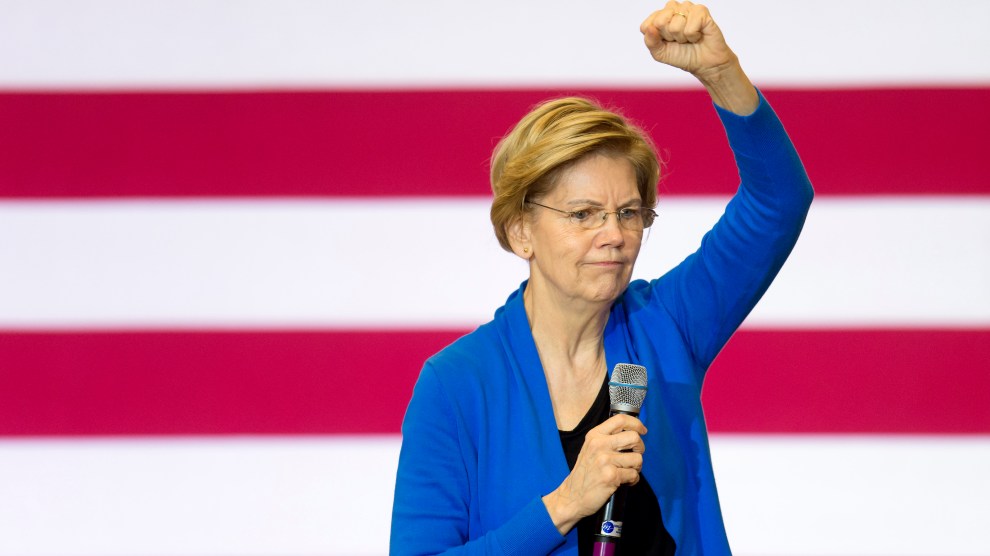 Elizabeth Warren’s campaign knew things weren’t looking good by mid-afternoon on Tuesday, several hours before the final ballots would be cast in New Hampshire. Campaign manager Roger Lau tempered expectations in a memo to supporters that looked ahead to Nevada and South Carolina—“two of the most diverse contests in the country”—and the Super Tuesday states, suggesting that Warren could still win the nomination with a slow, steady drip of support. “The road to the Democratic nomination is not paved with statewide winner-take-all victories,” Lau wrote. “This is a district-by-district contest for pledged delegates awarded proportionally.”

The message was one that Warren, her campaign, and its allies had recently been pushing: Slow and steady wins the race. In an interview with Time last week, Warren set aside the “pollercoaster” and argued a combination of that expansive organizing and her treasure trove of plans would be the keys to persuading voters only Warren could right the rigged system that was responsible for the everyday hardships they face.

Our reporters fanned out to victory parties for the top three Democratic finishers for this edition of the Mother Jones Podcast, “How Bernie Sanders Won New Hampshire.” Listen:

To be clear, the idea, at least at that point, was to rely on this famous organizing infrastructure to clinch the first-in-the-nation primary (not to mention to finish more prominently in the first-in-the-nation caucus). Throughout the past week, New Hampshire Democrats told me how much time and money the Warren campaign had spent on organizing not only its own campaign, but also the campaigns of state and local  officials who won their offices over the course of Warren’s long candidacy. Crystal Paradis, who won her seat on the Somersworth City Council last fall, told me Warren’s team showed up to her canvasses with a “vanload” of volunteers, compared to the one or two door-knockers other candidates sent her way. Paradis endorsed Warren last week, one of nearly 700 New Hampshire elected officials, activists, and community leaders to do so; the Warren campaign bragged about the “widest and deepest coalition” any candidate had built in the state.

“If I had to vote just based on the campaign built, designed, and organized, Warren’s team has been there—they’ve been kind, they’ve been generous,” Emmett Soldati, the chair of the Somersworth Democrats, told me.

Still, in the end, it wasn’t enough. And perhaps it was never going to be. New Hampshire, after all, is a swing state, where voters have elected two Democrats to the Senate but a Trump-loving Republican to the governor’s mansion. The Granite State’s largest voting bloc is comprised of independents who can choose which party’s primary to participate in, a dynamic that creates an opening for moderate candidates like Amy Klobuchar and Pete Buttigieg, who both finished above Warren. And while Warren is from neighboring Massachusetts, Bernie Sanders, the winner of the New Hampshire primary, is from neighboring Vermont. His organizing machine and populist appeal were evidently the right mix to make him victorious—a win five years in the making.

For all the ways Warren’s particular brand of progressivism and field operation failed her in New Hampshire, the biggest test of her overall strategy is the slate of contests before her. As I’ve previously reported, Warren designed her many, many plans—from housing to banking to student debt—with, first and foremost, a racial justice lens. That lens, though crucial in drawing white progressives to her campaign, arguably wasn’t the most natural message for Iowa and New Hampshire; after all, these states are, respectively, 90 percent and 93 percent white. The rubber meets the road for Warren now that Nevada and South Carolina are up next—states where Warren’s organizers have been on the ground for almost her whole year-plus long candidacy.

“There’s nobody who can weave together economic justice and racial justice like she can,” says Adam Green, co-founder of the Progressive Change Committee, which backs Warren.

As she moves forward, Warren will need to make up ground with black voters, and she certainly won’t be alone in trying to sustain her campaign with appeals to a more diverse electorate. A flagging Joe Biden is relying on voters of color to keep his candidacy alive—and the most recent polls suggest that support is still strong (at least it was before New Hampshire). And Sanders, Warren’s chief progressive rival, has also leaned into a racial justice agenda, with rhetoric that’s far more explicit than what he said during his 2016 run. He, too, has a solid operation going in the Palmetto State and strong support among nonwhite voters.

When I saw Warren’s campaign in South Carolina in November, she’d made headway with white progressives whose “great awokening” has expanded their racial consciousnesses in the Trump era. Now, we’ll see if she can convert those voters of color, too.