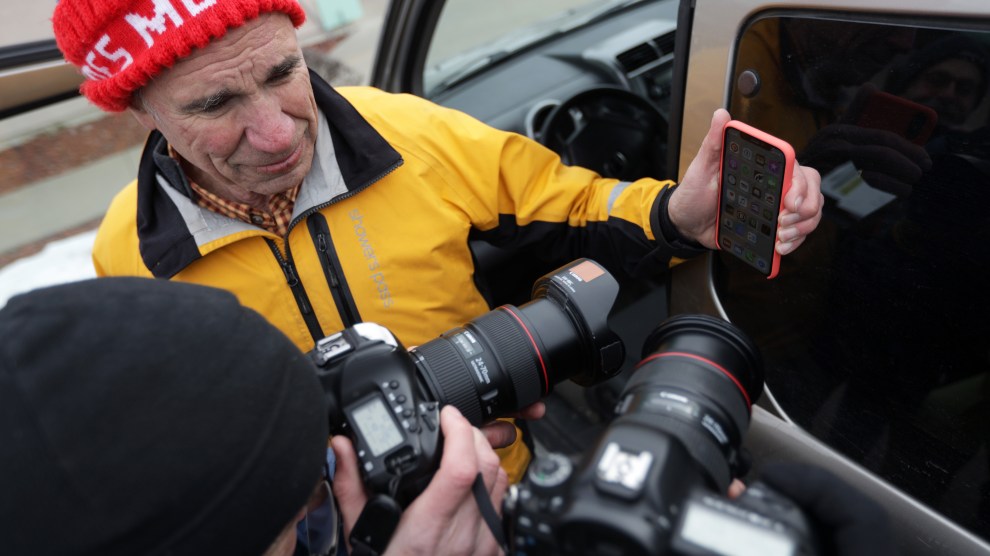 The day after the Iowa Caucuses, Carl Voss, Des Moines City Councilman and a precinct chair, shows press photographers the app that was used for caucus results reporting on his phone.Photo by Alex Wong/Getty Images

The fiasco thrust the for-profit tech firm Shadow, which developed the software, into the spotlight. Acronym, a progressive non-profit and Shadow’s primary backer, billed its small team of “strategists, data nerds, creatives, Facebook ninjas and organizers” as Democrats’ only hope for the “tools and tactics needed to win campaigns in a digital age.”

Acronym’s pitch was catnip for a clout-heavy base of Democratic operatives, and helped Shadow land the Iowa caucus contract, an enormous prize for a young and untested firm. Shadow and Acronym were driven by the same ethos as the management consulting industry—an increasingly influential sector politically—where young, inexperienced, and pedigreed workers routinely take on big, specialized jobs. As a former staffer at consulting titan McKinsey & Company put it in Current Affairs magazine, the management-consulting mindset is a technocratic conviction that “we just need well-funded, smart people to look at the problems of the world, and one by one they will fall away.”

Acronym and Shadow applied the worst lessons of consulting to politics: substituting experienced staff—and their knowledge of the systems, institutions, and organizations they’re part of—with an elite-but-inexperienced consultant class on temporary assignment, a system pioneered by management-consulting superpowers like McKinsey.

McKinsey’s size, history, and heft have made it practically synonymous with the consulting world. The firm relies on hiring fresh graduates from the most elite institutions possible: management consulting, along with finance, are the most popular industries for Harvard, Princeton and Yale undergrads (in this way, it’s extremely ironic that ex-mayor Pete Buttigieg, a Harvard and McKinsey alum, “won” the caucus ruined by management-consultant ideology). And companies like McKinsey and Acronym have long used a sheen of general excellence to talk their way into fixing things that aren’t broken.

Shadow’s development team had little meaningful experience—especially not the high-stakes, high-security coding experience needed for a key election. Iowa’s 2016 caucuses were run by Microsoft, which opened a media center, staffed a consortium of politics and business experts, and coordinated appearances from the candidates. PBS said 2016 results “came in quickly” with the Microsoft app, which felt “like a major change in how caucuses, and down the road, how all elections can run.” Android developer Kasra Rahjerdi told Motherboard that Shadow’s failed election app “was clearly done by someone following a tutorial.”

If Shadow lacked technical know-how, it compensated with unbeatable political bona fides. LinkedIn profiles of the company’s top three employees show that all were staffers on Hillary Clinton’s 2016 presidential campaign—a credential that to many Democratic operatives is the professional equivalent of going to Harvard. Acronym’s 32-year-old CEO, Tara McGowan, worked on President Barack Obama’s 2012 reelection (she now shares a WeWork office with Shadow). ACRONYM board member David Plouffe managed Obama’s 2008 campaign before becoming a senior Obama administration advisor. If experience with Clinton’s 2016 campaign is establishment Democrats’ Harvard, then having staffed Obama’s might as well make you a Rhodes Scholar.

On Twitter, University of Michigan tech and media scholar Justin Joque, who is writing a book on the role of algorithms and statistics in late capitalism, pinned the Iowa disaster on consultants usurping processes that trained workers once ran.

“We are seeing over and over the replacement of people who know how organizations, bureaucracies and systems function with poorly designed and specified ‘apps’ that continually fail,” Joque tweeted. People in charge, as Joque put it, increasingly believe that “local institutional knowledge and labor can be easily replaced with consultants,” because “bosses have deluded themselves into thinking that they can go it alone without the workers who are constantly fixing, patching and maintaining these complex systems.”

As Joque points out, consulting mishaps played an important role in the fatal crashes of aerospace giant Boeing’s 737 Max airliner, which was launched with faulty software over longtime engineers’ objections. Boeing engineers told ProPublica’s Alec MacGillis that the firm “went from being led by engineers to being led by business executives driven by stock performance.” Experienced engineers, once the heart of the company, were sidelined or pushed out by executives who thought they’d found a universal formula for success.

Stan Sorscher, a Boeing engineer and union official interviewed by ProPublica, told other Boeing staff that the one-size-fits all, bottom-line approach of Wall Street analysts wouldn’t work for the high-stakes debut of the new airliner. An analyst shut him down. “You think you’re diﬀerent,” Sorscher was told. “This business model works for everyone. It works for ladies’ garments, for running shoes, for hard drives, for integrated circuits, and it will work for you.”

Chief among Boeing’s failures, according to ProPublica, was this gradual reversal of internal priorities. Boeing’s turn to consulting locked out the workers who understood aerospace systems, prioritizing management over workers and metrics over results. Even at gold-standard McKinsey, where a three-year project to reduce violence at New York’s infamous Rikers Island jail backfired badly, the pedigree-first strategy is faltering.

It may seem obvious that inexperience and a singular focus on bottom lines would produce warped outcomes. It’s clearly not obvious to everyone. In fact, to a certain kind of person, the technocratic dream makes perfect sense. You’ve made good grades, been the best, your entire life. McKinsey advertises itself as the natural home of the best—so why not work for a company that pays you well, pats your back, lets you work in a bunch of fields, and sets you up to remain in front by attending the best business schools and landing the best jobs?

And if you buy into the idea that perfect grades are a decent qualification to control the levers of prisons, planes, or politics, then you’ll either retain someone to do that for you, or—like Acronym’s wing of the Democratic Party—you’ll recreate that mindset and management style at home. Democrats bought into their own version of the management-consulting dream. Not for the first time, it blew up in their faces.

But when you implement the management-consulting approach within your own organization—as Acronym did—you don’t get to parachute out before the consequences hit. McKinsey maintains a lauded reputation, despite its role in the fall of Enron, its botched Rikers Island project, and an enormous and illegal contract with South Africa’s government that the New York Times called “the worst mistake” in the firm’s “storied nine-decade history.”

An earlier version of this article misstated Professor Adam Sheingate’s parent institution. Sheingate is affiliated with Johns Hopkins University; the error has been corrected.