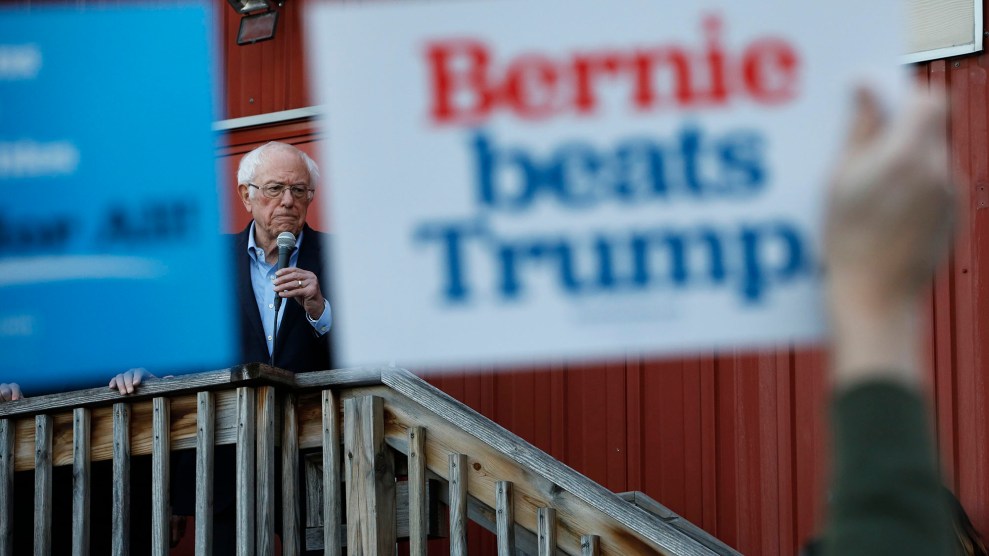 Here’s an incomplete list of things that came up in the first 25 minutes of Joe Biden’s remarks in Cedar Rapids on Saturday, on the penultimate day of campaigning before the Iowa caucuses: Santa Claus; NBA legend Nate “Tiny” Archibald; the future presidency of 29-year-old Rep. Abby Finkenauer (D-Iowa); firefighters; John F. Kennedy’s definition of moral courage; Biden’s “overwhelming support in the African American community”; the 2017 white supremacist rally in Charlottesville; Angela Merkel; “flag officers at the Pentagon”; the Declaration of Independence; “ridiculous tweets”; the Iran nuclear deal; “John and I” (meaning Kerry); “Barack and I” (meaning…you know); Joni Ernst; George Washington (“turning over in his grave”); the “soul” of the country; the “backbone” of the country; the “character” of the country; David Brooks.

And here’s what Biden didn’t raise in that time: any specific issues he would promote should he assume the presidency next January. Oh, there were boasts about policies he’d advanced in the past and complaints about policies pushed by Trump. (The chemical weapons treaty, the Affordable Care Act, and the assault weapons ban are in the former camp; “children in cages,” cowing to Russia, and “the wall” are in the latter.)

Biden, to an unusual degree, is running less on what he wants to do as president than on the idea that he, alone, can beat the president. But across the board, in a campaign that’s been dominated for long stretches by differences over policy, questions of “how do you pay for it?,” and big plans, the message Biden and his rivals have sounded in the final days of Iowa was decidedly different. Undecided voter after undecided voter told me they were looking for a candidate who could beat Trump. In the Iowa home stretch, the contenders were happy to explain they were that candidate.

Pete Buttigieg spent the final week of the campaign (and much of his time before that) touring Obama-Trump counties in Iowa and arguing that only someone from the “heartland” can win back voters there. (Never mind that Hillary Clinton grew up in the Midwest and Trump did not.) Some policy questions came up—one voter even stood up to thank him for his Douglass Plan, designed to combat systemic racism—but mostly, Buttigieg seemed to want to remind voters as much as possible of Barack Obama (who, you’ll remember, won Iowa twice).

At a rally Saturday morning for Minnesota Sen. Amy Klobuchar at a brewpub in Bettendorf, supporters like Tom Burns wore green T-shirts that spelled out her electoral success: “Turned 42 Trump Counties Blue in 2018”; “Wins Big in the Midwest.”

Policy was an afterthought for Klobuchar, too, unless you count a proposal to rebuild the Great Lakes blue wall “and make Donald Trump pay for it.” Eventually, she got into a few ideas: more funding for long-term care, lower prescription drug prices, and rejoining the Paris climate accord. But the focus was on the kinds of voters she’d win over if she were the nominee—”independents and moderate Republicans” who just want the country to get back to normal. As she put it to much applause, recycling a line she’d used at one of the debates: “The difference between a plan and a pipe dream is you can get a plan done.”

Massachusetts Sen. Elizabeth Warren, to a large degree, stuck to her old script. At a town hall in Davenport on Saturday, the audience seemingly half-filled with Illinois voters from across the Mississippi River, she walked through the same stump speech she has deployed for years, a series of personal and professional stories on the need for “big structural change” and a sketch of what those changes should be. She got into the weeds on how her (much-discussed) health care proposal would actually work and offered a quick primer on her plans for disability rights and reversing population drain in farm country (it starts with funding rural hospitals). There was talk of universal pre-K and “housing for every family in America.” This is how Warren talked when she was surging in the polls last fall, and it’s how she’s still going even as she’s dropped to fourth.

Warren is still betting that voters want to vote for plans. But her surrogates spent the week pushing a line that more directly responded to the concerns of many of the Iowans I spoke with, who liked what they heard from her but considered her a bit too far-left to appeal to moderates in November.

At a rally on Friday evening in Des Moines, held without the candidate herself because of the ongoing Senate impeachment trial, Rep. Katie Porter (D-Calif.) vouched for Warren by describing her own success in a historically Republican Orange County district. “I know a thing or two about swing districts,” she said. If a Warrenite (literally, the senator’s former research assistant) could win a seat that had been Republican since the 1930s, she argued, that should settle the electability question.

Warren got more reinforcement from Rep. Deb Haaland (D-N.M.), who told the audience that as a former state party chair, “I know what it means to see a winning candidate and I know what a winning candidate is.” Former San Antonio mayor and HUD secretary Julián Castro cast Warren as a unifying figure capable of bringing together a fractured party—”the best candidate to win.” At the event in Davenport, Warren spoke in front of signs that said “unite the party.”

Sanders is different. He’s not the unity candidate, and some of his surrogates seem more than happy to stir things up. But his closing message too is responsive to the demands of the electorate right now. In a three-stop swing on Sunday at campaign offices east of Des Moines—part of a concerted effort to bring out volunteers for the final stretch—Sanders talked up Medicare for All, climate action, free college, and criminal justice reform. Of course he did. Sanders can hardly get in a restaurant order without making a pitch for single-payer. (Though these days, he does a lot more listening.)

But his closing message was also about electability. It’s just a term he defines very differently from Biden and Klobuchar. In his version, the candidate who can win will do so more by peeling off voters who feel screwed over by the present system than by making himself or herself safe to moderates. (While Sanders was stuck in Washington on Friday, surrogate Michael Moore analogized the campaign to online dating—no one was going to go on a date with the person who described themselves as simply “safe.”)

Outside the Sanders campaign office in Newton, Iowa, was a little storefront display made by volunteers that, when I describe it, sounds like the kind of dream you have on Robitussin. Out of cardboard, someone had constructed an anthropomorphic corn stalk. It was wearing a winter hat with ear flaps. The corn…man had big bushy eyebrows, which seemed to imply that it was also supposed to be Bernie Sanders.

A sticker on the front said “Bernie Beats Trump,” and another on the side offered context. Winning in November is “the most important thing for many Democratic primary voters,” it read, advising voters to look up the head-to-head poll results at RealClearPolitics if they don’t believe the hype:

“Stick this on your car and spread the word.”

This is definitely something pic.twitter.com/sGUJRayNfh

If Sanders is going to win here on Monday, it won’t be just because of “the highest turnout in the history of Iowa caucuses” (his prediction) or a policy framework that gave a whole set of voters the kind of change they wanted. It’ll be because enough Iowans heard that message and believed it.