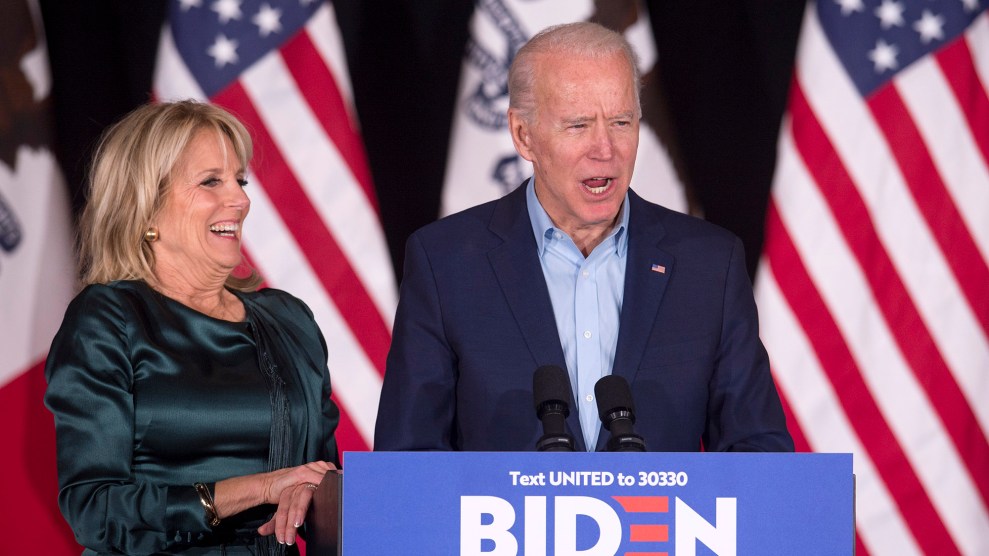 Joe Biden speaks in Des Moines the night of the Iowa caucuses.Brian Cahn/ZUMA

We still don’t know the final tally of results from the Iowa caucuses, but all initial indications are that it was a very bad night for Joe Biden, who likely placed fourth—by any measure—in the first contest for the 2020 Democratic nomination.

How has the former VP and erstwhile frontrunner handled the loss? Absolutely horribly.

Watch this. Biden adviser @SymoneDSanders will NOT say she believes the data coming in from Iowa is correct.

This is not going to help anyone trust the process. "I guess we'll have to take the Iowa Democratic party at their word." pic.twitter.com/s0dYhaoWX0

This is shockingly irresponsible. Biden’s staff is essentially trying to foster unreasonable doubts in order to cover for the fact that he didn’t do well there.

Sure, it is frustrating that the Iowa Democratic Party has been slow to release results and less than open about when final numbers will come out. But despite technical issues with that app that was supposed to transmit results to the state party, there is absolutely zero reason to believe that the final results will have been skewed.

There are many, many problems with how caucuses are conducted, but one upside is that they are near-foolproof when it comes to preventing election-rigging, because the process unfolds entirely in public, giving each side’s supporters a chance to call foul if any numbers don’t add up. When I was in Iowa earlier this week, I watched more than 1,000 voters in downtown Des Moines gather into clusters on different sides of the room designated for each candidate, assess how many voters were in each camp, redivide amongst themselves, and then call it a night. Not only that, each person had to fill out a card marking their preference, creating a lengthy paper trail. If that site—which elected delegates only for Bernie Sanders, Elizabeth Warren, and Pete Buttigieg—magically was reported as electing a ton of delegates for Andrew Yang, there would be hundreds of witnesses who could flag the irregularity.

Biden himself is at least a bit more honest about what happened, saying in New Hampshire on Wednesday that “we took a gut punch in Iowa.” But he needs to get his campaign staff to keep to that line. Otherwise, questioning the integrity of the results is copying a bit too much from the president he wants to defeat this fall.