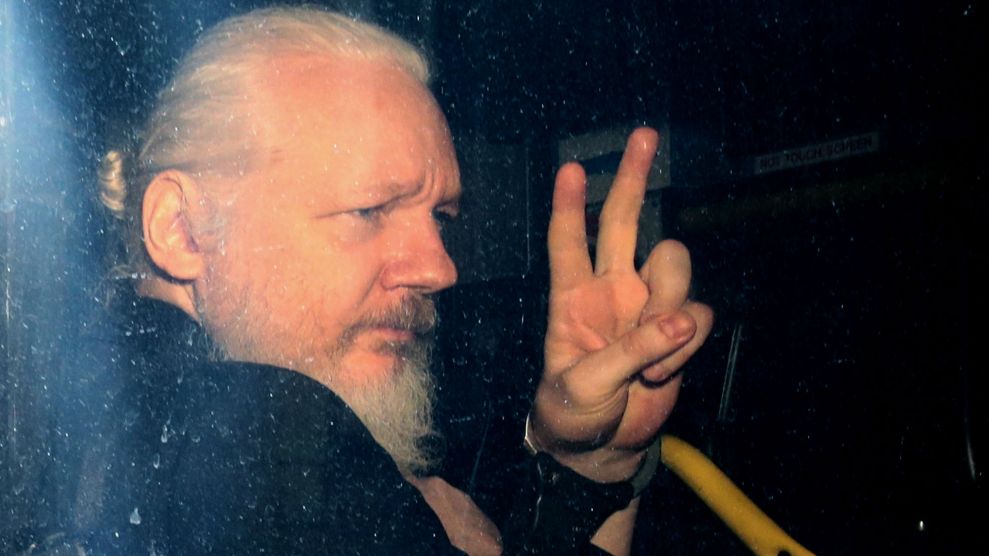 ulian Assange gestures to the media from a police vehicle on his arrival at Westminster Magistrates court on April 11, 2019 in London.Jack Taylor/Getty Images

A lawyer for Julian Assange claims that former Republican Rep. Dana Rohrabacher told the WikiLeaks founder in 2017 that he would receive a pardon from President Donald Trump if he claimed Russia was not the source of hacked Democratic emails that the group published in 2016. The Assange lawyer also says the deal was authorized by Trump.

The claim that Trump was aware of Rohrabacher’s proposal may well be false. The former California Congressman and the White House quickly denied it. And Assange has previously made multiple false assertions related to WikiLeaks’ release of Democratic emails in 2016. But Assange’s account, much of which was already public knowledge, highlights ongoing efforts by Trump and his supporters to use the prospect of a presidential pardon to convince allies and others facing prosecution not to divulge information damaging to the president.

At a preliminary hearing held Wednesday in London as part of Assange’s fight against extradition to the US, where he faces charges related to WikiLeaks’ 2010 publication of diplomatic cables and other sensitive information, Assange attorney Edward Fitzgerald described an offer Rohrabacher made while visiting Assange at the Ecuadorian Embassy in London. According to multiple media outlets, Fitzgerald cited a statement from another Assange lawyer, Jennifer Robinson, which states Rohrabacher said that “on instructions from the president, he was offering a pardon or some other way out, if Mr Assange…said Russia had nothing to do with the DNC leaks.” Robinson claims she was present when Rohrabacher made the offer. The judge overseeing the case ruled the evidence admissible. In a subsequent tweet on Wednesday, WikiLeaks said: “The witness statement is one of the many bombshells from the [defense] to come.”

Assange’s claim partly tracks with Rohrabacher’s own account. He told the Wall Street Journal in 2017 that he offered a pardon “or something like that” to Assange in exchange for evidence that proved Russia was not behind the 2016 hack of the Democratic National Committee. At the time, Assange had already denied Russia was WikiLeaks’ source, contrary to the unanimous conclusion of US intelligence agencies. He never provided evidence for his claim. He also fanned a baseless conspiracy theory, pushed by Russia and right wing Americans, that Seth Rich, a DNC staffer who was murdered in 2016, was the source of the emails.

In statement issued Wednesday, Rohrabacher, who was defeated in 2018, said that he had told Assange that “if he could provide me information and evidence about who actually gave him the DNC emails, I would then call on President Trump to pardon him,” and that he had later alerted then-White House Chief of Staff John Kelly to his efforts. But Rohrabacher said he did not “offer Julian Assange anything from the President because I had not spoken with the President about this issue at all.” On Wednesday, White House spokeswoman, Stephanie Grisham told reporters that Trump “barely knows Dana Rohrabacher other than he’s an ex-congressman,” and has “never spoken to him on this subject or almost any subject.”

But whether or not Trump knew of this pardon proposal, Rohrabacher’s effort is one in a long list of apparent efforts by Trump and his allies to use the prospect of a pardon to sway people with potentially damaging knowledge about contacts between the Trump campaign, Russia, and WikiLeaks in 2016.

Assange’s courtroom claim came the day after Trump granted clemency to 11 people, including many he knows personally or whose pardons were advocated by people who donated to Trump and Republican fundraising committees. These and prior mid-term pardons issued by Trump have been faulted as signals to encourage Trump associates still facing prosecution or prison sentences not to cooperate with investigations into investigations into Trump’s conduct. Trump on Thursday retweeted a call for him to pardon his former National Security Adviser Michael Flynn, who awaits sentencing for lying to FBI investigators about his contacts with Russia’s ambassador.

In one of a barrage of public statements apparently intended to influence the Thursday sentencing of his longtime political adviser Roger Stone for making false statements to Congress, obstruction of justice and witness tampering, Trump this week indicated that he might pardon Stone. “We’re going to see what happens,” he told reporters when asked about pardoning Stone. (Stone has already appealed to Trump for a pardon.)

Trump has a personal stake in Stone’s sentencing. Stone’s trial included testimony that Stone had personally briefed Trump and other campaign aides on what Stone claimed was inside knowledge he had regarding WikiLeaks’ plans for the release of Democratic emails. The Trump campaign, Special Counsel Robert Mueller’s report found, sought information on the WikiLeaks releases and tried to capitalize on them. In written answers sent to Mueller in 2018, Trump, while admitting he spoke “from time to time” with Stone in the summer of 2016, claimed that he did not recall speaking to Stone about WikiLeaks or to recall anything at all about their calls. But Rick Gates, a former Trump campaign aide who cooperated with Mueller, testified during Stone’s trial that he had overheard a phone conversation in which Stone seemed to give Trump information on WikiLeaks’ plans. This suggests that Trump, whose public references to WikiLeaks on the campaign trail show he was closely monitoring their email releases, lied to Mueller. Stone has vowed never to cooperate with prosecutors, winning praise from Trump.

Stone has also worked to secure a pardon for Assange. “I am working with others to get JA a blanket pardon,” Stone texted Randy Credico, a former radio host who Stone in congressional testimony had falsely labeled his intermediary to WikiLeaks, early 2018. “It’s very real and very possible. Don’t fuck it up.”

Special Counsel Robert Mueller’s report last year detailed efforts by Trump and his lawyers to dangle pardons to encourage potential witnesses to stay quiet. In public and private messages, Trump and his emissaries suggested to Flynn, Stone, Flynn, Michael Cohen, ex-Trump campaign boss Paul Manafort, and former Trump campaign aide Rick Gates that they could receive pardons if they declined to cooperate against the president.

Assange’s claims Wednesday show how widespread the pattern is.