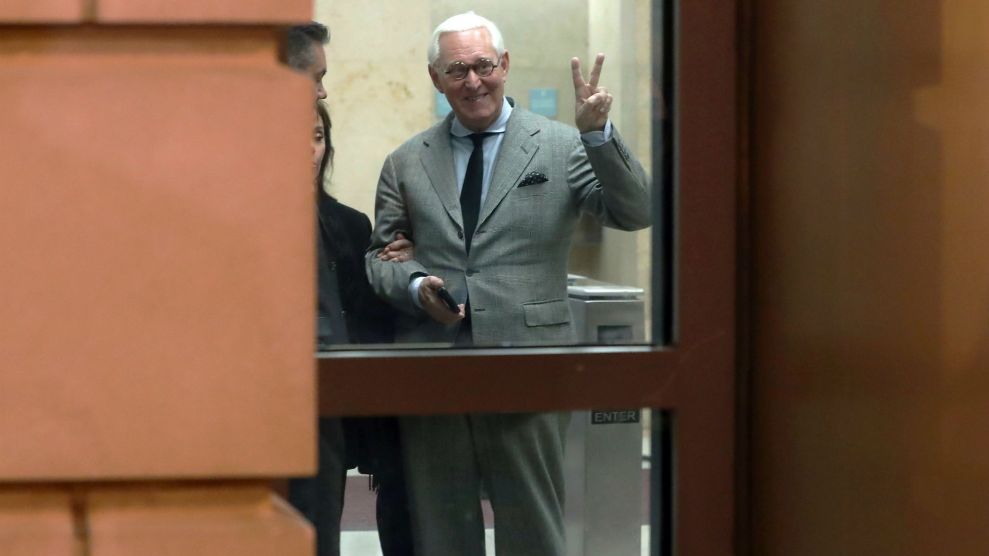 In a 1:48 am tweet Tuesday, President Donald Trump decried federal prosecutors’ recommendation that a judge sentence Trump’s longtime political adviser Roger Stone to seven to nine years in prison. Less than 16 hours later, the Justice Department announced in a new court filing that the sentence it had previously recommended would be “considered excessive and unwarranted under the circumstances.” Meanwhile, four prosecutors who had worked on the Stone case withdrew from it.

Following news of the Justice Department’s plan to reduce its recommendation, four prosecutors on the Stone case, Aaron Zelinsky, Jonathan Kravis, Michael Marando and Adam Jed, filed notices announcing their withdrawal from the case, apparently in protest of the change. Zelinsky and Kravis also resigned from their jobs as special assistant US attorneys for the District of Columbia. The lawyers did not announce their reasons.

This is a horrible and very unfair situation. The real crimes were on the other side, as nothing happens to them. Cannot allow this miscarriage of justice! https://t.co/rHPfYX6Vbv

The Justice Department’s shift and the prosecutors’ resignations caused an immediate uproar. Senate Minority Leader Chuck Schumer (D-N.Y.) asked Justice Department Inspector General Michael Horowitz to investigate. “This situation has all the indicia of improper political interference in a criminal prosecution,” Schumer wrote. House Judiciary Chairman Jerrold Nadler (D-N.Y.) said his committee “will get to the bottom of this.” At a White House event, Trump told reporters that he “didn’t speak to” the Justice Department about Stone, ignoring the probability that officials there saw his tweet.

In November, a Washington, DC, jury found Stone guilty on five counts of making false statements to Congress, obstruction of justice, and witness tampering. These crimes related to statements Stone made in 2017 and 2018 as he attempted to conceal his efforts—undertaken during the 2016 campaign—to glean information about Wikileaks’ plans for releasing hacked Democratic emails.

Prosecutors’ said in a sentencing memo that Stone deserves a stiff sentence, in part because his crimes involved obstructing a House Intelligence Committee investigation into Russian interference in the 2016 election. “It is against this backdrop that Stone’s crimes—his obstruction, lies, and witness tampering—must be judged,” the memo says.

But in the new memo, filed less than 24 hours later, the DOJ said that while “it remains the position of the United States that a sentence of incarceration is warranted here, the government respectfully submits that the range of 87 to 108 months presented as the applicable advisory Guidelines range would not be appropriate or serve the interests of justice in this case.”

This new filing is signed by Timothy Shea, the newly appointed interim US Attorney for the Washington DC, and John Crabb, an assistant US Attorney. Crabb on Tuesday afternoon filed a notice of appearance announcing he was joining the case.

The new filing notes that in the original recommendation, prosecutors had argued that Stone should receive a longer sentence for “threatening to cause physical injury” in an April 2017 email to Randy Credico, a former radio host and Stone associate, in which Stone stated, “Prepare to die, cocksucker.” In another email, Stone threatened to take Credico’s dog “away from [him].” Prosecutors had argued these messages aimed to keep Credico from contradicting Stone’s congressional testimony. But in the new filing, the DOJ says the request for a longer sentence was ill-advised because Credico has said he “never in any way felt that Stone himself posed a direct physical threat to me or my dog.”

Without this increase related to Stone’s alleged threat of violence, sentencing guidelines call for a “range of 37 to 46 months” in prison, the new filing says.

Regardless of the sentence, Trump’s tweet could signal his intention to pardon Stone.

Stone has previously pleaded for a Trump pardon. On the final day of Stone’s trial, Alex Jones, the far-right conspiracy theorist, read on his Infowars show a message Stone had apparently sent to Jones. “I appeal to the president to pardon me because to do so would be an action that would show these corrupt courts that they’re not going to get away with persecuting people for their free speech or for the crime of getting the president elected,” Stone said, according to Jones. Prosecutors cited this message in their sentencing memo, arguing that it resulted from Stone  violating a gag order imposed by the judge.

Trump has a significant personal interest in Stone’s plight. The men have known each other for decades, and Stone worked for Trump’s campaign in 2015 before he was pushed out under disputed circumstances.

But more significantly, Stone may be in position to shed light on claims that Trump made to special counsel Robert Mueller—claims that, we now know, were probably false. In written responses to Mueller’s office, Trump stated, “I do not recall discussing WikiLeaks with [Stone], nor do I recall being aware of Mr. Stone having discussed WikiLeaks with individuals associated with my campaign.” But evidence in the trial appeared to show that Stone had communicated directly with Trump about WikiLeaks during the campaign. Rick Gates, a former Trump campaign aide who cooperated with Mueller’s office, testified that he overheard Trump speaking to Stone on the phone on July 31, 2016, apparently about WikiLeaks’ plans to release Democratic emails. After that call—which came nine days after WikiLeaks had dumped tens of thousands of hacked Democratic National Committee emails onto the internet—Trump “indicated that more information would be coming,” Gates told the court.

There is no chance the Justice Department will indict Trump, while he remains in office, for lying to Mueller. And odds are long that prosecutors would go after Trump for a supposed memory lapse, however implausible, after he leaves office. But House Democrats have indicated an interest in whether Trump misled Mueller. House general counsel Douglas Letter said in a November court hearing that congressional Democrats wanted to review grand jury material gathered by Mueller, which the Justice Department refused to hand over to Congress, in part to judge whether Trump lied to the special counsel. “Was the President not truthful in his responses to the Mueller investigation?” Letter asked in a hearing before the US Court of Appeals for the District of Columbia.

Prior to his indictment, Stone pledged that he would not cooperate against Trump, a vow that that drew praise from the president, who lauded Stone for his “guts.” So far, Stone has stuck to that promise. Democrats’ interest in the matter shows why Trump might want to help his old consigliere.