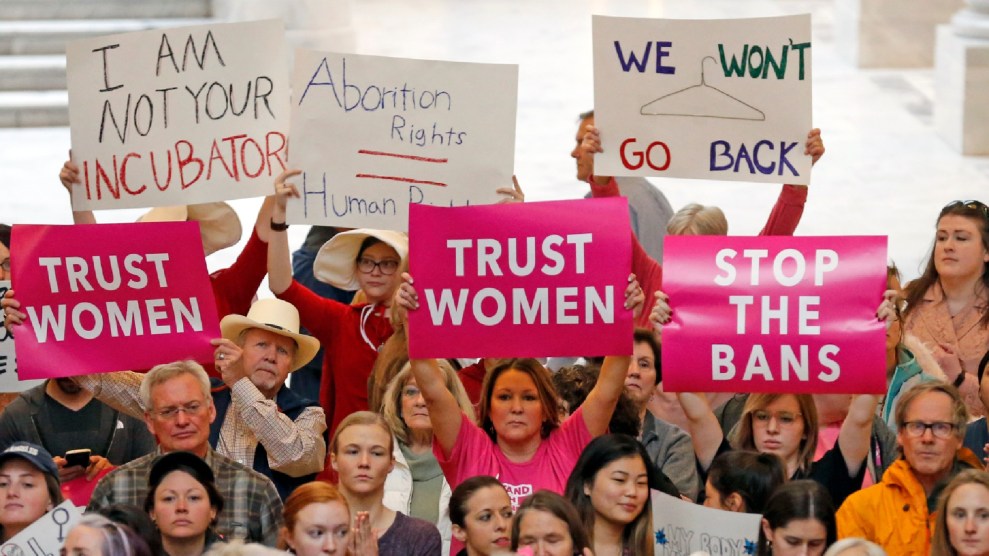 Activists gather in the Utah State Capitol Rotunda to protest abortion bans, on May 21, 2019. Rick Bowmer/AP

A Republican lawmaker in Michigan has introduced legislation that would require doctors to inform patients seeking abortions about a procedure for “abortion reversal”—an idea with no scientific backing that researchers say can cause serious damage.

For years, conservatives have been pushing the idea that patients who receive medical abortions—those induced with medication rather than surgery—can reverse the process by taking progesterone. Last month, researchers at the University of California, Davis, who were studying the effect of using progesterone to reverse abortions were forced to halt the study after serious “safety concerns” emerged. Three of the 12 patients in the study had to be hospitalized due to severe vaginal bleeding.

But if the Michigan legislation becomes law, doctors would be forced to present abortion-reversing progesterone as a valid option.

“It’s called the Abortion Pill Reversal bill, and it basically allows a woman to be informed that if she should change her mind during a chemical abortion, that she be provided information that a treatment is available,” state Rep. Beth Griffin, who introduced the bill on January 22, told WSJM News.

Medical abortions involve taking a series of two pills. Religious conservatives have argued that women who take mifepristone, the first of the two drugs, and then take the hormone progesterone instead of the second pill, misoprostol, can “reverse” their abortion. Heartbeat International, one of the largest anti-abortion organizations in the world, claims that it has helped women reverse more than 450 abortions, and it promotes an abortion pill reversal hotline on their website. Currently, eight states—Arkansas, Idaho, Kentucky, North Dakota, South Dakota, Oklahoma, Nebraska, and Utah—require abortion providers to tell patients about “abortion reversals.” Five of the states passed these laws in 2019 among a flurry of anti-abortion legislation nationwide. To date, no peer-reviewed study has ever shown that an abortion can be reversed with progesterone after taking mifepristone.

In June 2019, the American Medical Association sued North Dakota over its abortion reversal law, arguing that it forced doctors to “provide patients with false, misleading, non-medical information.” In September, a federal judge blocked the law temporarily, writing that the law lacked “any medical or scientific evidence to support such a message.” A final ruling has not been issued.

While the University of California researchers were unable to find any evidence that abortions could be reversed by not taking the second abortion pill, they did find that patients who only took the first pill may be at “high risk of significant hemorrhage.” Abortion, by comparison, is considered a “low-risk surgery,” according to the American College of Obstetricians and Gynecologists, with a complication rate of less than 1 percent.

Griffin’s bill is before Michigan’s House Committee on Families Children and Seniors, where it is awaiting a hearing.