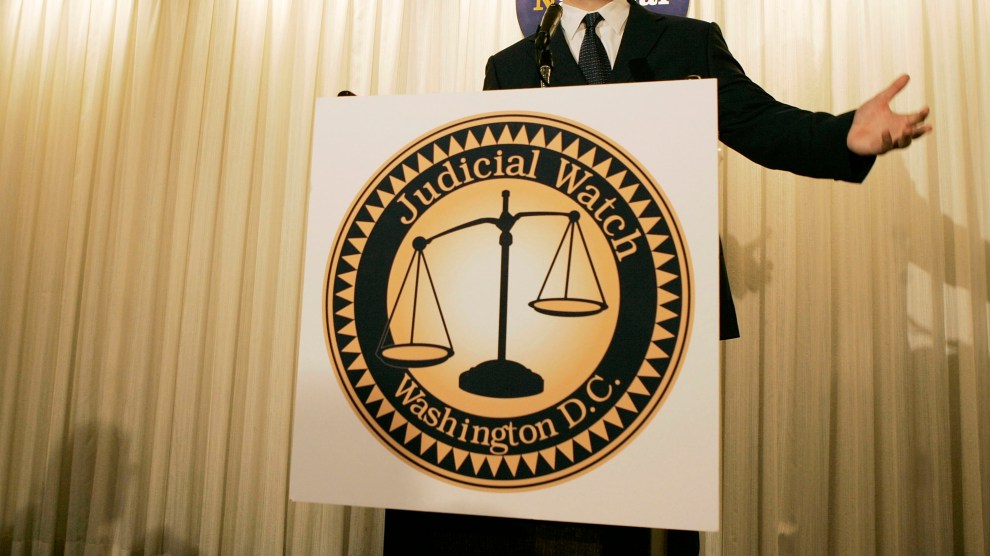 Judicial Watch, a conservative group with a history of putting out false information, put out a quickly debunked report alleging voter fraud in Iowa on Monday. Photo by Mark Wilson/Getty Images

Conservative groups are trying to peddle conspiracy claims of voter fraud to undermine an election that doesn’t even involve Republicans.

Iowa Secretary of State Paul Pate, who is a pro-voter-ID law conservative, refuted the claim on Twitter and linked to Iowa’s own numbers debunking Judicial Watch’s report.

.@seanhannity It's disappointing to see you spread this #FakeNews. Their claims are FALSE. The actual numbers, compiled every month by my office and readily available for anyone to view, tell a much different story, with #FACTS: https://t.co/eq8ew0TvTg

“My office has told this organization, and others who have made similar claims, that their data regarding Iowa is deeply flawed and their false claims erode voter confidence in elections,” Pate said in a statement. “They should stop this misinformation campaign immediately and quit trying to disenfranchise Iowa voters.”

Regardless, Judicial Watch’s claim has gone massively viral in the right-wing internet community. The president of Judicial Watch, Tom Fitton, went viral with his tweet of the report, picking up over 6,000 retweets. Fitton also put out his own statement on Monday night in which he stood by his debunked claims of voter fraud.

But it was right-wing internet personality Charlie Kirk and Fox News host Sean Hannity who ensured that Judicial Watch’s disinformation reached peak virality. Hannity’s tweet of the report was retweeted almost 2,000 times by his 4.5 million followers, and Kirk’s tweet of the information without any citation was retweeted over 40,000 times to his 15 million followers.

Judicial Watch has a long track record of pushing incorrect information, including  a false voter fraud claim in 2017.  The group has also pushed other baseless hoaxes, including one about ISIS setting up a terrorist camp in Mexico and a lie about the Department of Justice organizing protests against George Zimmerman, the man who murdered Trayvon Martin.

But voter fraud is a recurring myth favored by right-wingers, and no amount of tsk-tsking and Pinocchio tests from factcheckers have been able to curb its popularity. Julia Carie Wong, a reporter at the Guardian, pointed out that right-wing disinformation sourced to Judicial Watch’s report was traveling much further online than Iowa state’s efforts to debunk it.

Technology companies are failing to stymie the disinfo’s spread as well. Natalie Martinez, a researcher at MoveOn, noticed that Facebook was letting Judicial Watch advertise its false report, despite the company claiming to have tighter standards that bar pages from advertising false information.