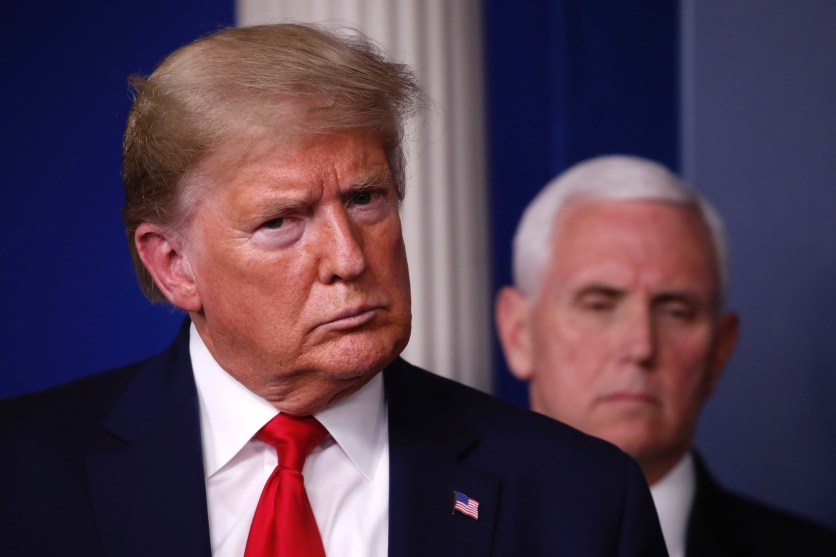 When Donald Trump took office, he refused to divest from his business empire, setting the stage for a presidency riddled with conflicts of interest. The coronavirus outbreak, which has battered the hospitality sector, including the president’s collection of hotels and resorts, raised the unprecedented question of whether the federal government might help to bail out Trump’s company. But a provision Democrats inserted in the $2 trillion rescue package that could be passed by the Senate on Wednesday would block the Trump Organization from accessing the biggest pot of rescue funds.

The measure prohibits companies owned by the president, vice president, and other federal officeholders from receiving aid from the $500 billion fund, overseen by Treasury Secretary Steven Mnuchin, that is allotted for helping ailing businesses. Also excluded from receiving a federal handout from this fund are companies owned by the spouses, children, or in-laws of these officials—a provision that seems targeted at presidential son-in-law Jared Kushner, who retains a stake in his family’s company, which has struggled in recent months. (A final draft of the bill hasn’t been released, but a legislative draft includes the conflict-of-interest language.)

The provision blocks from bailout dollars any companies in which the president or other excluded individuals hold a “controlling interest,” which is defined as a stake of 20 percent or more. Trump owns almost all of his business outright.

The conflict-of-interest measure is potentially a big blow to Trump’s company as it excludes nearly all of his properties from the most direct form of help contained in the overall $2 trillion bailout.

Some possible exceptions include Trump-branded buildings or resorts, where he doesn’t own the properties but is paid licensing and management fees. Trump’s companies also don’t appear to be barred from participating in other areas of the bailout, such as a small business loan program available to certain hotel chains and other firms.

Companies across the nation are being hammered by the virtual economic freeze triggered by the spread of the coronavirus, but Trump’s business has been particularly hard hit. Three out of every four dollars Trump reported earning in revenue in 2018 came from his involvement in hotels, resorts, or golf courses—businesses that were among the first to take a nosedive as the virus spread.

Over the weekend, the Trump Organization was forced to shutter six of its seven biggest properties, at least temporarily, and the company laid off more than 300 employees. New government restrictions in the United Kingdom will likely require Trump’s two money-losing Scottish resorts to shutter as well.

Kathleen Clark, an ethics expert and law professor at Washington University in St. Louis, said that the conflict-of-interest wording in the legislation is a positive step but the public should still be skeptical.

“It is good that Congress is finally taking some action to rein in President Trump’s conflicts of interest,” she said. “But how can we trust the Trump administration to administer this provision? This administration has refused to implement or enforce other conflict of interest and ethics standards.”

Clark pointed to language contained in a lease signed in 2015 between the Trump Organization and the General Services Administration, the federal agency that oversees federal property and that owns the historic Old Post Office building where Trump’s DC hotel is housed. That lease signed as Trump was running for president, expressly barred any federal officeholders from operating the business that leased the property. Once Trump took office, the GSA decided the rule did not apply to him because he was not yet president when he signed the lease.

Clark also said it was important that certifications submitted by companies proving they are not owned by anyone on the excluded list should be made public.