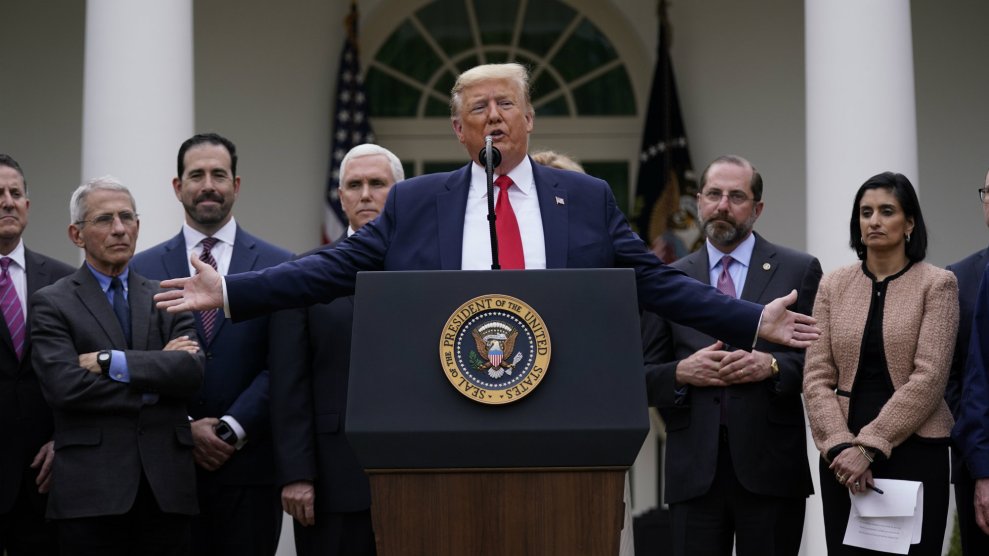 At a White House press conference on Friday, President Trump refused to take any responsibility for the federal government’s lackluster response to the novel coronavirus, an infectious disease that’s sickened at least 142,000 people and killed more than 5,000 worldwide. After explaining, with the help of several CEOs, that widespread testing would be rolled-out, Trump took questions from the press corps. His basic response? Not my fault.

So far, nearly 1,900 people in the US have tested positive for COVID-19, the official name of the disease caused by coronavirus, and 41 have died. At least 30 states have declared states of emergency, school systems have shut down and moved to distance learning, professional sports leagues have put their games on hold, and the absence of a coherent policy from the government has created a contagion of fear and anxiety reflected in the plummeting stock market.

Experts largely agree that the lack of available tests makes determining the real number of infections nearly impossible, which has the effect of making it harder to slow the spread of infection. According to the Atlantic, approximately 13,000 people in the United States have been tested. By comparison, South Korea is testing 10,000 people per day. But, according to Trump, those low numbers are not his fault.

NBC News’ Kristin Welker asked the president if he is to blame for the lag in testing. “No, I don’t take responsibility at all,” he responded before quickly moving to his tried and true strategy: blame Obama. “We were given rules, regulations, and specifications from a different time.”

But that simply isn’t true. No remaining Obama-era regulation has prevented the administration from rolling out tests.

Trump’s responsibility for the emerging crisis came up again when Yamiche Alcindor from PBS NewsHour asked about the dismantling of a pandemic-preparedness office that was once part of the National Security Council. “You said that you don’t take responsibility, but you did disband the White House pandemic office,” she said. “The officials that worked in that office said the White House lost valuable time because that office was disbanded.”

“I just think it’s a nasty question,” the president countered.

The National Security Council Directorate for Global Health Security and Biodefense was established in 2014 during the Ebola outbreak in Western Africa and was tasked with preventing the next disease outbreak from becoming pandemic. In 2018, the Trump administration dissolved the office.

“When you say me, I didn’t do it,” the president continued. “We have a group of people, I could ask, perhaps my administration.” He then turned to Dr. Anthony Fauci, the director of the National Institute of Allergy and Infectious Disease. “Perhaps I could ask Tony about that? Because I don’t know anything about that.” Then, the president likened the dismantling of a White House office to changing jobs. “Perhaps they do that to people,” he said to Alcindor, who was a reporter at the New York Times before leaving for PBS. “You used to work at another newspaper. Things like that happen.”