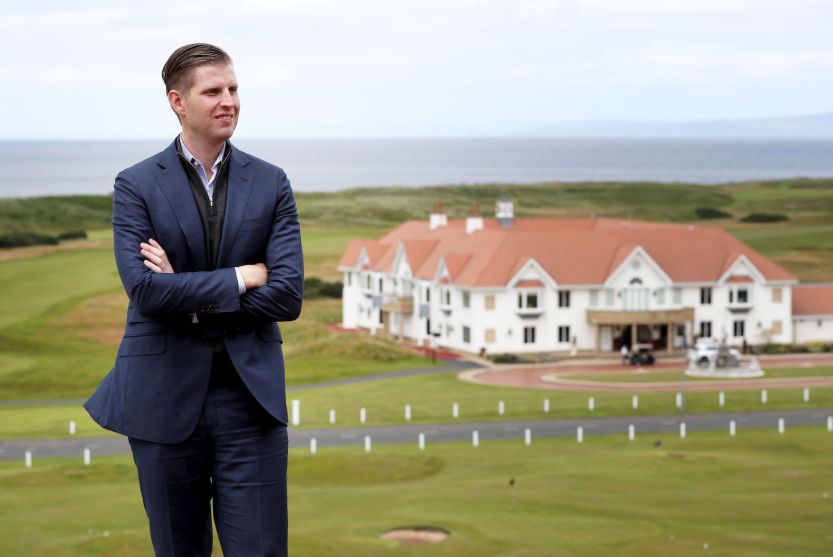 With the travel industry facing a potentially cataclysmic downturn if the coronavirus continues to spread, the Trump Organization is offering members of its New Jersey golf club a chance to travel to Scotland or Ireland with Eric Trump this summer—likely at great expense to taxpayers who will foot the bill for Secret Service protection for the president’s son.

According to an email sent to members of Donald Trump’s Bedminster golf club, Eric Trump will lead at least two three-day golfing outings this summer for club members. The price for each trip—one to Trump’s Doonbeg golf resort in Ireland and one to his Turnberry course in Scotland—will cost members $6,500 apiece, not including airfare. That’s a lot more than people typically pay to play at the Trump courses. Perry Golf, a golf tour operator which organizes golfing trips in Ireland and Scotland, is currently advertising 10-day trips to both Doonbeg and Turnberry, as well as a number of other courses, for $9,895—a price that includes airfare and seven more days of travel.

Of course, an independent tour doesn’t have Eric Trump along for the ride. Whether or not he is worth the premium for club members, it will cost American taxpayers a significant amount. Trump’s two adult sons have gone on a number of promotional trips for their father’s businesses, including leading golf trips to Ireland and Scotland. The administration has not released the exact cost of providing the Trump boys with Secret Service protection while they try to goose their father’s golf business in the British Isles. But we know the costs for similar trips, and they’re exorbitant.

For example, on Thursday, Citizens for Responsibility and Ethics in Washington released documents obtained through Freedom of Information Act requests showing that a two-day trip that Eric Trump took in early January 2019 to visit a Trump-branded property in Uruguay cost US taxpayers more than $80,786, just for hotel rooms for his Secret Service detail. (That doesn’t include costs such as their airfare or pay.) A 2017 trip to Uruguay by Eric Trump cost taxpayers more than $97,000 to cover hotel rooms for Secret Service and embassy staff. In 2017, Eric and his brother Donald Trump Jr. traveled to Dubai and the Dominican Republic to visit properties branded with their father’s name, running up a tab of $230,000 for Secret Service rooms.

The Trump Organization did not respond to requests for comment on why its upcoming trips will cost members so much, or whether it has any intention of repaying the costs of Secret Service protection.