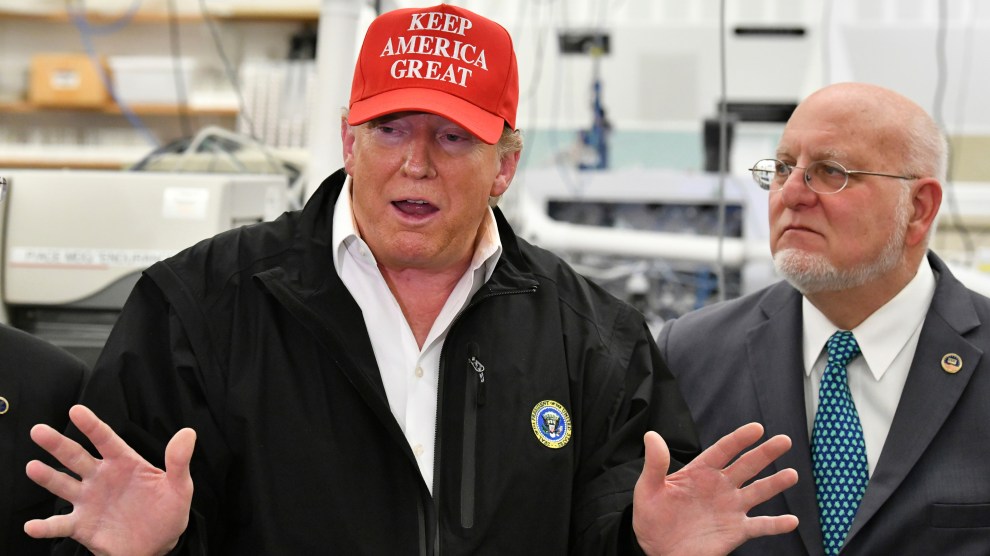 During an epidemic, a crucial function of leadership—governmental, scientific, and medical leadership—is to provide citizens with important and accurate information. Panic needs to be averted. Fears need to be addressed. Risks need to be assessed. And necessary action must be taken, collectively and individually, to save lives and prevent or reduce other damage to society. All of this is predicated on the dissemination of solid information. And the main transmission mechanism for such information is, of course, the media—news outlets that broadcast and publish what knowledgable government officials and experts have to say about the crisis. Yet Donald Trump, the person in charge of the government’s response to the fast-spreading coronavirus, has ramped up his effort to discredit the media at the very moment it’s most vital. And his reelection campaign has decided to place his political interests over the health and safety of the nation, disseminating a message that could threaten the lives of Americans.

On Monday morning, as the coronavirus crisis intensified, the Trump campaign zapped out an email to thousands, if not millions, of people, with the subject: “It’s all FAKE NEWS all the time.” The letter—sent jointly by the Trump campaign and the Republican National Committee—was a full-throated screed against the “mainstream media.” It decried the media as “UNHINGED,” and exclaimed, “They are deceiving the public and knowingly making up their ‘facts’ and ‘sources’ in order to protect their partners, the Democrats. They are so corrupt and have gone totally insane.” It continued: “They are truly the Enemy of the People! Liberal reporters can’t accept the fact that America wants FOUR MORE YEARS of President Trump and now they’re spiraling out of control.”

Trumpworld slamming the media is nothing new, but what makes this email different from similar missives is that this one doesn’t focus on any particular subject of the media’s supposed wrongdoing. In the past, the president and his campaign have tended to excoriate the media for reporting on the Russia scandal, the Ukraine scandal, impeachment, and other matters. You know, the usual—hoaxes, lies, conspiracies, political attacks. But this time around, the campaign is declaring the major media outlets cannot be believed on anything. These journalists peddle only “constant lies and attacks,” and their sole desire is to destroy Trump: “They’ve spent YEARS spewing LIES about OUR President to try and take him down,” the email proclaims. “They no longer care about accurate reporting and it’s time we do something about it.”

The whole point is to encourage people to view the media as the enemy within and consider news outlets as nothing but anti-Trump deception machines. For years, this strategy has helped Trump rouse and solidify his base, as he has convinced his loyal supporters there was nothing to the Russia scandal, the Ukraine scandal, the pay-off-the-porn-star scandal, the obstruction-of-justice scandal, and so many other scandals. But the difference now is that this tactic places the nation in direct danger.

What makes this email different is that it does not focus on any particular subject of the media’s supposed wrongdoing. This time around, the campaign is literally declaring the major media outlets cannot be believed on anything.

The Trump campaign is telling the public it should disregard whatever the media puts forward—especially when that reporting suggests the Trump administration is not adequately managing the crisis. This could well lead to Americans ignoring sound advice and taking actions that place them at risk and worsen the situation. Just a few days ago, for instance, Trump, who has looked to downplay the crisis, suggested that infected people could go to work.

Not surprisingly, Trump is employing his all-powerful Twitter feed to attack the media during the coronavirus outbreak. Hours before his campaign sent its do-not-ever-believe-the-media email, he tweeted: “The Fake News Media and their partner, the Democrat Party, is doing everything within its semi-considerable power (it used to be greater!) to inflame the CoronaVirus situation, far beyond what the facts would warrant.” Later in the day, he insisted that “Fake News” was the reason for the dramatic decline in the stock market (that is, not his response to the crisis). And on Monday afternoon, he shot out this simply put tweet: “So much FAKE NEWS!”

Trump’s long assault on the press has always been reprehensible. In the midst of a public health crisis, it is…well, what’s beyond reprehensible? Horrendous? Disgraceful? Reckless? Irresponsible? Disgracefully horrendous and recklessly irresponsible? Whatever the adjective, Trump and his campaign have opted to smear and vilify the organizations that are needed to keep the public informed about a national emergency that has the potential to turn into a national disaster.

By now, Trump whacking the media has become a running joke—a fan favorite at his rallies. In front of his adoring crowds, he denounces the press and claims that the TV cameras are being turned off at this moment (to censor his censure), even as the networks broadcast the spectacle. Many Americans have become inured to these sort of attacks. But with the country engaged in a full-on crisis that threatens individuals, communities, and the entire economy, Trump’s crusade to torpedo the media has become a grave threat.

But Trump’s remarks and this campaign email prove that the commander in chief cares about only one particular threat, and that is the political threat he faces. He realizes the truth is not on his side. And in the middle of this crisis, that makes Trump an immediate menace and a risk for everyone.