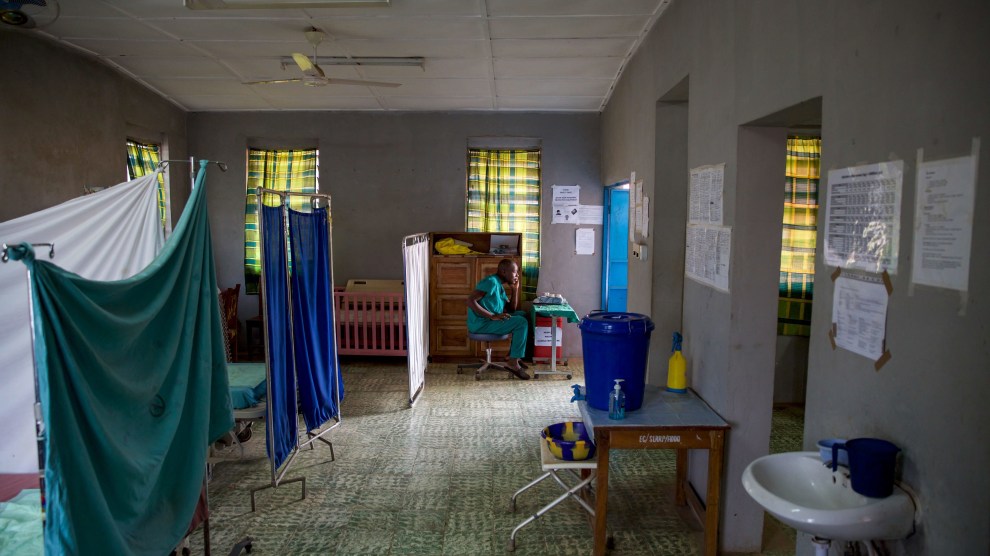 While most Americans stockpile supplies, plan for work and school closures, and cancel their travel plans, international aid experts are working tirelessly on a different kind of novel coronavirus preparation: They’re scrambling to figure out how best to respond to a snowballing epidemic in the developing world. In some places, cities and refugee camps teem with people living in close quarters, and rudimentary health care systems may buckle under an onslaught of patients. In small villages in Africa and Asia, many people have no access to websites with information about how best to prevent the virus.

“It is just a matter of time. This is going to spread.”

“We are avidly learning from what is unfolding in the northern hemisphere,” said Otto Chabikuli, the director of global health, population, and nutrition for the public health group FHI360. “The transmissions patterns, which groups are vulnerable, which are less vulnerable.”

In Africa, the pandemic is in its early days. As of Thursday, there were somewhere around 100 cases on the continent. So right now, aid workers are focusing on disseminating information to prevent the spread of the disease. Christopher Tidey, a communications specialist at UNICEF, said that his group is working closely with schools so that children can bring home fliers about preventative measures and symptom recognition, and teachers can contact health authorities if a child says a family member is ill. Linda Venczel, director of global health security at the international aid group PATH, underscored the importance of clear communication early on—both to inform communities and establish trust. “We need to assure people they won’t lose communication with family members if they need to go into quarantine or a clinic,” she said. During past outbreaks, workers found that separation from family was chief among patients’ worries.

The task of preparing an entire continent for a global pandemic is daunting. But many of the aid groups I talked to told me they have a secret weapon in the neediest communities: Their carefully laid groundwork from the Ebola outbreak of 2014-2016, which resulted in 28,600 cases and 11,325 deaths worldwide. In 2018, I wrote about a health hub that Venczel and her team had started in the Democratic Republic of the Congo, where a new Ebola outbreak had emerged. The center monitored indicators like school attendance and pharmacy sales to track the spread of the disease. They deployed satellite mapping technology to figure out where to send emergency response teams. Venczel believes that measures like these made a big difference in preventing the spread of the disease—the outbreak finally appears to be under control, with no new cases for nearly a month. Now, says Venczel, the team is readying the center to respond to COVID-19. With the mapping tools, “we zoom into areas that we know are at risk,” she says. “That really helps for planning.”

UNICEF, too, is dusting off systems it developed several years ago. One example: remote learning curriculums. During the Ebola outbreak, Liberia, Guinea, and Sierra Leone went through periods of up to 9 months when schools were closed, which affected 5 million children. A disruption like that, says Tidey, has “massive consequences,” not just in terms of learning, but also because children out of school can be more vulnerable to abuse or forced into work. UNICEF worked with local governments to develop online curricula in places with internet connectivity. In remote areas, they broadcast lessons over the radio. “We’re able to work with countries now to roll that out as it’s needed,” he said.

Missteps from past outbreaks serve as important lessons as the coronavirus looms. During Ebola, for instance, some health centers sent test results to the government—but never let local health officials know who had tested positive. Venczel said that her team is working hard to make sure that the system for the coronavirus will close that loop so that healthcare workers “can get in touch via phone or home visit with the person who tests positive and their family.” Then they’ll be able to quarantine as necessary.

FHI360’s Chabikuli underscored the importance of coordinating governments, aid groups, and local health workers. During the Ebola outbreak, his group helped established weekly health meetings in the DRC, where many different agencies shared information about cases and response. Those meetings are still going on, and they’ll be critical as the country prepares for the coronavirus, he said.

One critical problem has been sustaining the public health infrastructure of these communities once the crisis has passed. Between outbreaks, funding for infectious disease control in the developing world tends to dry up. And the developing world turns its back—witness the Trump administration’s dissolving of the White House pandemic preparedness team. “We have to strengthen health systems,” Chabikuli said. “That was one of the biggest lessons” during the Ebola outbreak. In an op-ed last month published by global development website Devex, Chabikuli urged world governments to increase their support for aid groups. “Siloed, panicked, reactive responses to COVID-19 in Africa would suggest lessons from past crises did, indeed, go to waste,” he wrote. “Investments from the international community are needed.”

Today, even with some of these systems in place, aid workers have a monumental task ahead of them. In many places, healthcare systems are almost certain to be quickly overwhelmed when the coronavirus hits. “It is just a matter of time,” said Venczel. “This is going to spread.” This prospect, said Chabikuli, is a strong reminder of the importance of sustained preparation.

Venczel warned that this outbreak will not be the last—because of increased world travel and climate change, infectious disease will be a recurring problem over the decades to come.  “A one-off for an emergency is helpful,” she said. “but what we really need is sustained funding.”