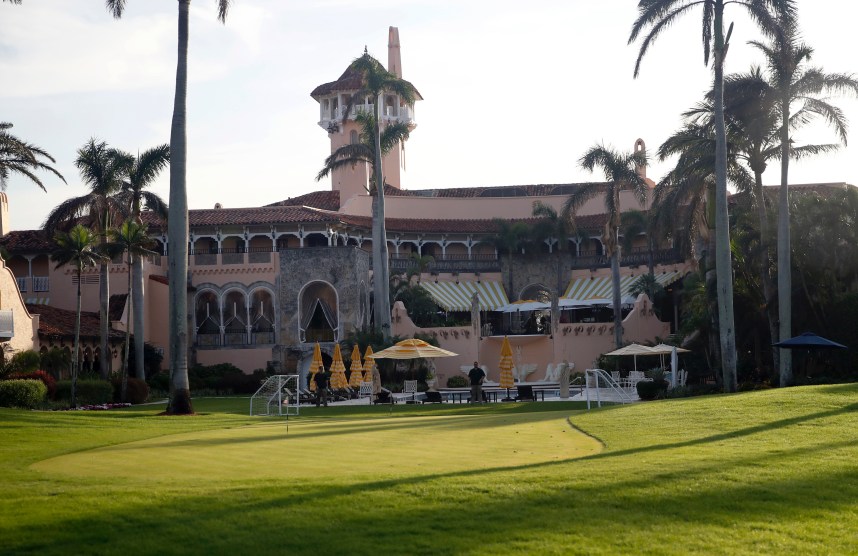 On Tuesday afternoon, Donald Trump sat down with hotel executives who pleaded with the president to assist the beleaguered hospitality industry with a multibillion-dollar bailout. The meeting, also attended by Vice President Mike Pence and Commerce Secretary Wilbur Ross, highlighted a massive conflict of interest: Trump derives much of his fortune from hotels and golf clubs, and his properties have been battered by the coronavirus outbreak. If he bails out the hotel industry, he will also be bailing out himself.

Trump has made money many different ways over the years—or tried to—but since taking office, his hotels and resorts have been the mainstay of his personal wealth. Though Trump made big bucks in the last decade selling condos and other properties, that business has almost entirely dried up since he became president. His once-lucrative reality TV career is also on hold. But Trump’s 11 hotels and 16 golf resorts have continued to produce revenue in recent years. Of the $434 million in revenue the president disclosed in 2018, at least $336 million came from his hotels, resorts, and golf clubs.

It’s still too early in the year for the full impact of the coronavirus on the golf industry to be determined. A number of Trump courses are located in areas where the golf season hasn’t even started. But according to the hotel industry leaders who met with Trump, their properties are already being decimated by the crisis. In the meeting, the hotel execs asked for a $150 billion bailout.

Christopher Nassetta, chief executive officer of Hilton Worldwide, one of the world’s largest hotel chains, told the president that his company planned to close, at least temporarily, almost all of its operations in major cities. “Hilton’s been around 100 years—we’ve never closed a hotel that wasn’t going to be demolished or rebuilding,” Nassetta said. “The bulk of our hotels in the major cities are closing as we speak.” Nassetta estimated that occupancy rates for hotels globally could fall to 10 to 15 percent.

To put that in context, Jan A. deRoos, a professor emeritus of hotel finance and real estate at Cornell University, told Mother Jones that high-end hotels (like those the Trump Organization operates) require somewhere around a 60 percent occupancy rate to break even. The sunk costs of running a hotel are huge, he explained. They include keeping the building open and employing housekeeping and maintenance staff ,whether rooms are full or not. If a hotel maintains a good occupancy rate, it can be extremely profitable. If it doesn’t, deRoos said, it can go downhill fast.

The outbreak is already hitting Trump properties—and hard. And many weren’t faring too well already. Business at the Trump Doral golf resort in Florida slumped 18 percent between 2015 and 2017, for instance. But the pandemic is now slamming some of Trump’s most reliable moneymakers. That includes Trump’s luxury hotel in DC, which earned $40.2 million in revenue in 2018. That figure includes sales at the hotel’s popular steakhouse and its Benjamin Bar & Lounge, a pricey hangout popular with Beltway conservatives, lobbyists, and various Trumpworld figures. The hotel is still open for business, but DC Mayor Muriel Bowser has ordered that all restaurants and bars close through the end of the month (except for takeout or delivery), effectively shuttering this conservative clubhouse.

Trump’s Mar-a-Lago resort has been another stalwart in his portfolio. In 2018, it earned $22.6 million in revenue, in no small part because of the president’s habit of visiting it nearly every weekend throughout the winter. But Trump’s insistence on using Mar-a-Lago as the “Winter White House” also brought coronavirus right to his door. Last week, Brazilian President Jair Bolsonaro visited Mar-a-Lago accompanied by three people who later tested positive for the virus. As a result, Trump was tested for the virus. (He was negative, according to the White House doctor.) The club closed on Monday for a deep clean. On Wednesday, it told members it would temporarily close its main dining services, spa, gym, and guest rooms. Other parts of the club will remain open, but under state restrictions limiting its capacity.

The club’s lucrative sideline as a location for galas and large events also seems to be on pause (the Trump Organization did not respond to requests for comment). A fundraiser scheduled for this weekend (and described as the largest daytime event the club hosts each year) was postponed indefinitely. And the president himself has said that Americans should limit gatherings to no more than 10 people.

On Tuesday, the general manager of Trump’s Bedminster, New Jersey, golf club, where the president likes to spend many of his summer weekends, announced it would close its facilities with the exception of one its golf courses—which can be utilized only if players walk the course (instead of using shared golf carts) and carry their own bags.

“These are unusual times, stay safe, and we will update you as events develop. If we can do anything for you please let us know. Wash your hands!” wrote David Schutzenhofer, the club’s manager.

Mother Jones contacted the White House and the Trump Organization to see whether Trump’s company would participate in any potential hotel industry bailout and whether Trump was taking any steps to deal with this potential conflict of interest. Neither responded.