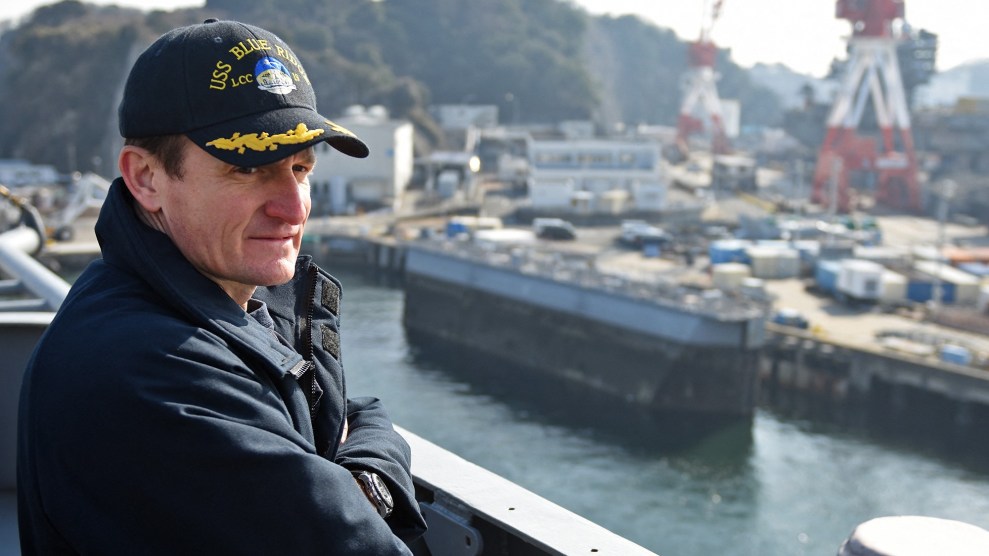 This story was originally published by ProPublica, a nonprofit newsroom that investigates abuses of power. Sign up for The Big Story newsletter to receive stories like this one in your inbox.

Capt. Brett Crozier, fired this week from command of the aircraft carrier USS Theodore Roosevelt, joins a growing list of Navy officers who attempted to raise concerns about the safety of their ships and crew, only to pay with their jobs.

Crozier wrote a letter dated March 30 warning that an outbreak of the coronavirus on his ship was a threat to his crew of some 4,000 sailors unless they disembarked and quarantined.

“We are not at war, and therefore cannot allow a single sailor to perish as a result of this pandemic unnecessarily,” Crozier wrote. “Decisive action is required now.”

We do not know all the facts that prompted the letter. But we know that once it was published in the San Francisco Chronicle, the acting secretary of the Navy, Thomas Modly, relieved Crozier of command. Crozier, 50, had been a rising star in the officer corps. He will remain in the Navy at his current rank, though his career future is uncertain. In viral videos, Crozier’s sailors can be seen cheering him loudly as he disembarks the Roosevelt, alone, before driving away.

Navy experts believe that the cumulative effects of the service’s decisions over the past several years to punish those who speak out will result in silencing sailors with legitimate concerns about their health and safety.

“This may have the effect of chilling the responses of other commanding officers because it will be perceived, fairly or not, as a shoot the messenger scenario,” said James Stavridis, a retired admiral and former head of the United States Naval Institute, who called for an investigation into the circumstances surrounding the dismissal.

The Navy’s top officer, Adm. Mike Gilday, initially praised Crozier’s attempt to warn his superiors. But the next day, Thursday, Modly, the Navy’s civilian boss, reversed course, telling reporters that he fired Crozier because he lost confidence in the officer for not using a secure email network to properly route his complaint.

Crozier’s unclassified email wound up with 20 or 30 other individuals and at some point was provided to the Chronicle reporters. Modly said the public airing of the complaint had unnecessarily alarmed sailors and provided enemies with information that exposed weaknesses on one of the country’s most important warships.

As part of our 2019 investigation into the incidents in the Navy’s 7th Fleet, its largest overseas presence, ProPublica found repeated instances of frontline commanders warning superiors of risks the fleet was facing—a lack of training, exhausted crews, deteriorating ships and equipment. Those warnings, all sent through the normal chain of command, were met with indifference.

Disaster in the fleet struck in June 2017, after the USS Fitzgerald, a destroyer, collided with a cargo ship in the Sea of Japan. Two months later, a second destroyer, the USS John S. McCain, collided with an oil tanker in the Singapore Strait. The two accidents cost the Navy 17 sailors—the biggest loss of life in maritime collisions in more than 40 years.

Navy investigations laid blame on nearly the entire chain of command in the 7th Fleet, punishing commanders and sailors for failing to properly train and equip its crews and ships.

Adm. Joseph Aucoin, the head of the 7th Fleet, was fired. Vice Adm. Thomas Rowden, who oversaw training, was forced from his job. Cmdr. Bryce Benson, captain of the Fitzgerald, was recommended for court-martial.

But ProPublica reported that all three men had repeatedly tried to warn higher-ups of dangerous safety issues in the vaunted fleet, based at Yokosuka, Japan. They argued to their superiors that the Navy was running ships in the 7th Fleet too hard, too fast. Their warnings were dismissed.

Some of the Navy’s criminal cases against the officers collapsed after court rulings found possible bias in the Navy’s prosecution.

Benson, the Fitzgerald commander whose court-martial case was dismissed, said that Crozier “was right to strongly advocate for the safety of his crew and it was wrong for the SecNav [secretary of the Navy] to fire him for doing so.”

Senior leaders “continue to under-resource ships at sea and are slow to respond to commanders’ pleas for assistance,” said Benson, who is now retired. “From one tragedy to the next, senior Navy leaders continue to break faith with the fleet.”

Dismissing Crozier, Benson said, “sends a clear message to commanders: The authority and responsibility that you enjoy is yours alone and an absolute liability even when under-resourced and thinly supported.”

Modly emphasized that he did not intend his actions to discourage officers from coming forward to report their concerns through the chain of command.

“I have no doubt in my mind that Capt. Crozier did what he thought was in the best interests of the safety and well-being of his crew. Unfortunately, it did the opposite,” Modly said at a press conference.

But Crozier’s firing has raised alarm anew that the Navy is more interested in its public image than in fixing problems raised by its sailors. It did not go unnoticed by fellow officers that Crozier was dismissed within two days of his letter becoming public. Such haste is unusual, and raised questions about the due process afforded to Crozier.

Some now believe that the cumulative effects of the Navy’s decisions over the past several years to punish those who speak out will silence sailors who have legitimate concerns about their health and safety.

“His removal sends a really strong message that coming forward will end people’s careers,” said Mandy Smithberger, a military expert at the Project on Government Oversight. “Before this I’d say that risk was more so implied through both social and professional retaliation. This is much more explicit.”

Crozier’s firing comes amid increased concern that the Pentagon is not acting quickly enough to protect whistleblowers. Glenn Fine, the principal deputy inspector general for the Defense Department, testified that the agency has shown a reluctance to punish officials who take punitive action against whistleblowers.

“We have seen a disturbing trend in the DoD disagreeing with the results of our investigations or not taking disciplinary action in substantiated reprisal cases without adequate or persuasive explanations,” Fine testified in January to the House Committee on Oversight and Reform. “Failure to take action sends a message to agency managers that reprisal will be tolerated and also to potential whistleblowers that the system will not protect them.”

Navy commanders may be fired at any time by their superiors. And the captains of Navy ships are uniquely responsible for any mishaps on their ships.

A study published earlier this year of more than 2,000 disciplinary cases found that Navy commanders were historically dismissed for “crimes of command”—such as a ship colliding with another vessel or running aground.

More lately, however, the study documented that it has become harder to tell if those punished are being disciplined less because of their performance and more because they had either internally or publicly called the Navy out for neglect.

“In the modern Navy,” wrote Capt. Michael Junge in the Naval War College Review, “a commander is most likely to be removed for personal misconduct or when the crime of command includes one or all of the following elements: death, press coverage, or significant damage to the Navy, whether materially or to its reputation.”