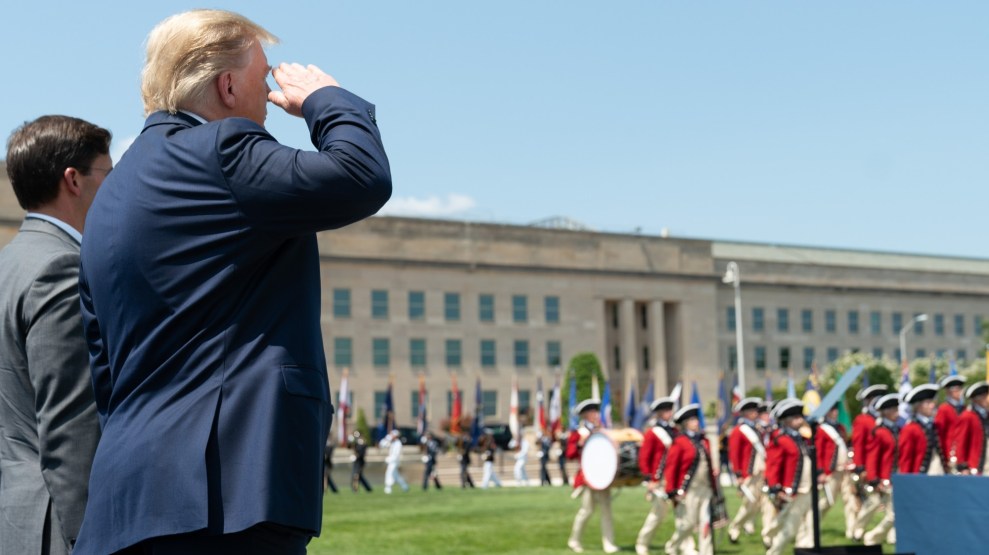 Since the coronavirus crisis first took hold in the United States, the Defense Department has received $10.5 billion in emergency funding from Congress. Despite national security spending for this fiscal year now exceeding $756 billion, the Pentagon isn’t finished making requests. The department is already asking for “billions and billions” in any future stimulus funding that Congress considers.

On Wednesday, more than 50 mostly liberal advocacy groups, including Win Without War, 350.org, and the Arms Control Association, urged congressional leaders in a letter to not allocate a single extra dollar to the Pentagon this fiscal year. “As every family around this country has had to do, the Pentagon should not be immune from making tough decisions on how to reallocate its resources in light of this crisis,” a letter signed by the groups states. “If taxpayers are being asked to adjust their budgets, surely the recipient of three quarters of a trillion of our tax dollars can be asked to do the same.” The letter, signed by groups that are among the most influential drivers of progressive defense policy, shows a willingness from the left to relitigate the conventional wisdom that defense spending must rise during a crisis.

Defense spending has skyrocketed in the post-9/11 era, and only rarely have lawmakers from either party seriously threatened to curtail it. Not even a series of budget caps imposed during the Obama administration could turn off the spigot from Congress, which increased the Pentagon’s budget by more than $150 billion between 2015 and 2020. House Democrats, as part of the annual debate over the defense spending authorization bill, tried to reduce overall national security spending to $733 billion last year,  $17 billion less than what Republicans wanted, but the compromise bill that eventually reached President Trump’s desk tacked on an additional $5 billion. Two additional bursts of emergency funds—one for the damage caused by extreme weather, the other for the department’s coronavirus response—have made the defense budget nearly $20 billion greater than what Congress initially approved in December.

Even as lawmakers hand the Pentagon fatter budgets, the department routinely finds ways to not spend the money it has received. Between 2013 and 2019, the Pentagon returned more than $80 billion in unspent funds to the Treasury Department, sparking criticism from Sen. Bernie Sanders (I-Vt.), who said at a Senate Budget Committee hearing last year, “We’re throwing so much money at the Pentagon that they literally do not know what to do with it.” Last year, the department gave back nearly $15 billion, according to data compiled by researchers at the Friends Committee on National Legislation, Project on Government Oversight, and Women’s Action for New Directions. Pentagon leaders have also dug up more than $10 billion in the past 18 months from funds originally intended for construction projects and other programs to steer toward Trump’s border wall.

For these reasons, the letter states, “any arguments that the Pentagon cannot use existing resources to respond to the crisis should be met with considerable skepticism.”

The annual defense policy bill, known as the NDAA, has generally been a bipartisan product that clears both chambers of Congress with huge majorities. But since Democrats assumed control of the House in 2018, the party’s progressive wing has worked to break the two-party consensus that has made rising levels of defense spending the norm. Rep. Ro Khanna (D-Calif.), a House Armed Services Committee member who recently served as a national co-chair for Sanders’ unsuccessful presidential campaign, has been one of the most vocal progressives in favor of reducing defense spending. On Tuesday night, he tweeted in favor of leaving the Pentagon out of future coronavirus relief bills.

The Pentagon shouldn’t get any more COVID relief money.

If the DoD needs more cash, some quick ideas I have for saving money:

Khanna pushed for a series of progressive amendments to last year’s NDAA that, among other things, would have prevented Trump from starting an unauthorized war with Iran. The resulting bill was stripped of nearly every progressive provision as part of a compromise with Senate Republicans, but Khanna vowed earlier this month to reignite that fight. “The leadership is going to have to make a choice,” Khanna told reporters in a conference call. “They’ll either pass a progressive NDAA or pass a bill with Republican votes.”

When Congress eventually reconvenes, it will have to reckon with how to assess the Pentagon’s ongoing response to the coronavirus pandemic. In recent weeks, the Defense Department has spent millions of dollars on field hospitals, N95 masks, and ventilators while also propping up its defense industry allies with substantial cash infusions. On April 2, the Air Force agreed to give $882 million to Boeing for a set of flawed KC-46 tankers, which the Air Force’s top general David Goldfein has acknowledged are practically unusable. The money had been withheld from Boeing until the flaws in the planes were fixed, but given the economic threat posed by the virus, Pentagon officials agreed to supply the aviation giant with a de facto subsidy. (On Wednesday, Goldfein said he is “as confident as I ever have been” that Boeing now has a plan in place to fix the planes.) The department has also begun paying its contractors sooner than it normally would as part of an adjusted pay schedule, ensuring roughly $3 billion reaches the industry.

In lieu of further money for the Pentagon and the defense industry, the advocacy groups’ letter encouraged Congress to “focus your attention on the national pandemic response and economic relief for people across the United States rather than providing more money for the Pentagon’s already overflowing coffers.”