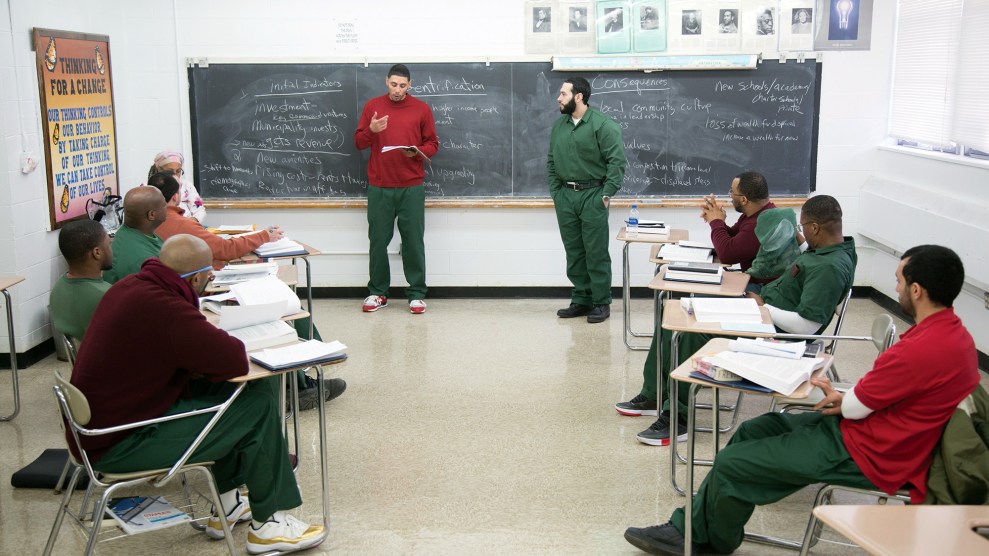 Students in the Prison-to-College Pipeline program gave a class presentation at Otisville Correctional Facility in New York in 2019.Amber Gray

Coronavirus has upended the semester for college students across the country—and thousands of incarcerated students are no exception. On the outside, professors are conducting classes over video conferencing and graduations will be live-streamed online. But in prison, where the majority of incarcerated people are cut off from the Internet, the options for distance learning are limited, leaving college administrators scrambling to figure out how to finish the semester from beyond prison walls. Many have found workarounds now that they can no longer enter the prisons. But they fear the coronavirus could undermine a critical component of college in prison: teaching in person.

College classes keep him “busy and away from prison politics and negativity.” Taking classes has given him a “sense of accomplishment.”

For Pablo Negron, who is enrolled at Prison-to-College Pipeline at Otisville Correctional Facility, college classes keep him “busy and away from prison politics and negativity.” Taking classes has given him a “sense of accomplishment,” which makes him feel like his time behind bars wasn’t simply wasted. As he looks forward to life after prison, he says he is optimistic he’ll have more career choices with a college education.

How well college programs are able to adapt during the pandemic largely depends on their relationship with the corrections department for their state, and what resources they’re able to provide. Many prisons are operating with a reduced workforce, and can’t spare the staff to keep the college programs running. But there’s an understanding among prison officials of the value of education programs, especially during a crisis, says Ruth Delaney, who provides assistance to college sites for the Vera Institute of Justice.

“Tensions are high,” Delaney said. “Being able to give people something familiar, and engaging can really help to make sure all the resources are focused on fighting coronavirus.”

Many college administrators say corrections officials have bent over backwards to make sure college classes continue, but without laptops, tablets or an easy way to securely access the Internet, many college programs have had to put their semesters on pause. With classes on hold, some incarcerated students won’t be eligible for important incentives. In some state prisons, earning a college degree while behind bars could result in a sentence reduction through “good time” credit programs. In New York, for example, students could have six months shaved off their time for completing designated programming, provided they also have a clean disciplinary record.

For incarcerated students at Great Meadow, an isolated prison several hours outside of New York City, the disrupted semester means they’ll have to wait even longer before they’re eligible to transfer to facilities closer to home. Students are placed on an educational hold while enrolled in college programs, so they cannot be transferred to other facilities while they complete their degrees.

At San Quentin Prison in California, college classes are suspended until volunteers from the Prison University Project can return to teaching in person. It was a choice between keeping the students on track to finish the semester as planned or ensuring they received a high quality education, said Jody Lewen, the project’s executive director. In-person teaching is essential because students, who overwhelmingly come from marginalized communities, benefit from relationships with their peers and professors.

“It’s particularly important for students who don’t have lots of relationships to a wide range of economic and social networks,” Lewen said. “The professors are people who get to know you and give you guidance and advice.”

“Being able to give people something familiar, and engaging can really help to make sure all the resources are focused on fighting coronavirus.”

As coronavirus spread throughout New York in early March, Jessica Jensen decided it was no longer safe to hold classes at Otisville Correctional Facility. Jensen directs the Prison-to-College Pipeline program at John Jay’s Institute for Justice and Opportunity, which enrolls 52 men. At first, classes continued through the mail. Professors sent the remaining course materials directly to the prison and students completed their work on their own. The program designated several “clerks” who collected coursework and submitted it to the deputy warden. The warden then mailed the completed work to the professors, who graded it and returned it to the students.

Shortly after she reconfigured the semester, Jensen received some alarming news from the Department of Education: correspondence learning is not approved for programs that receive funding through the Second Chance Pell Program, which enrolls nearly 10,000 incarcerated students across the country. Any Second Chance sites wrapping up the semester through the mail would have to pause their classes or return the grant money.

“We have heard from numerous postsecondary institutions participating in the Second Chance Pell experiment that prisons’ responses to COVID-19 have created significant challenges for the continuation of instruction at prisons,” the department wrote in a statement issuing guidance to Second Chance programs. The department declined to waive the restriction on correspondence classes, and has offered several alternatives for distance learning, including teaching over email or on conference calls. They believe these methods allow for more “regular and substantive” interaction between teachers and students, as outlined in the grant requirements, than simply corresponding by mail.

Now, Jensen is working with New York’s Department of Corrections and Community Supervision to use the prison’s teleconferencing equipment, normally used for parole hearings. Jensen hopes they’ll be able to “approximate the Zoom experience,” allowing professors to directly engage with their students throughout the week.

A spokesperson for the department said they are working “with college partners to ensure our student population is able to complete required coursework and will continue working to ensure students are able to do so in the future.” The statement added that several facilities are “developing plans for distance learning through telephone and video conferencing.”

Research shows that earning a degree in prison decreases recidivism and boosts incarcerated peoples’r career prospects once they are released. A 2013 study by the RAND Corporation found that every dollar spent on prison education saves $4 to $5 dollars on the overall cost of incarceration in the first three years after someone is released from prison.

It’s not clear just how many incarcerated people are enrolled in college classes. Enrollments plunged after the 1994 crime bill eliminated Pell grants for incarcerated students. Prior to the 1994 ban, there were roughly 772 college prison programs in over 1,200 prisons nationwide, according to a 2017 report by the American Enterprise Institute, a conservative public policy organization. By 1997, the Institute estimates, only a handful of college programs in prison remained.

“It’s particularly important for students who don’t have lots of relationships to a wide range of economic and social networks.”

But over the past several years, with new programs the Obama administration started and President Trump continued, college attendance in prison is on the rise. In 2015, the Department of Education piloted the Second Chance Pell Program, an experimental initiative to provide Pell grants to incarcerated students. The program, now in its third year, has provided college classes to roughly 17,000 incarcerated people. On April 24, the DOE announced 67 new Second Chance sites, doubling the number of Pell-funded college prison programs.

Members of Congress have also taken interest in higher education in prison. In April 2019, Senator Brian Schatz, a Democrat from Hawaii, introduced legislation to restore Pell grants for incarcerated students. The bill received bipartisan support in both the House and Senate before stalling in committee.

Finding their way back into prison classrooms after the pandemic will be a “heartbreakingly difficult equation,” says Max Kenner, director of Bard Prison Initiative in New York. The decision to leave was urgent: Classes ended in order to keep people safe. Returning to the prisons could mean sending faculty and staff into facilities where the virus may have spread unchecked. For incarcerated students, an extended lockdown could mean months without the community they’ve come to depend on.

As they wait to see what the fall semester holds, Kenner, like many others, hopes to maintain the foothold college programs have made in prisons over the years. If programs have to teach at a distance, they risk “losing the most meaningful part of what we do, which is classroom and community based work in the prisons,” he said. “The most important thing now is not leaving this crisis in a radically worse place than when we started.”