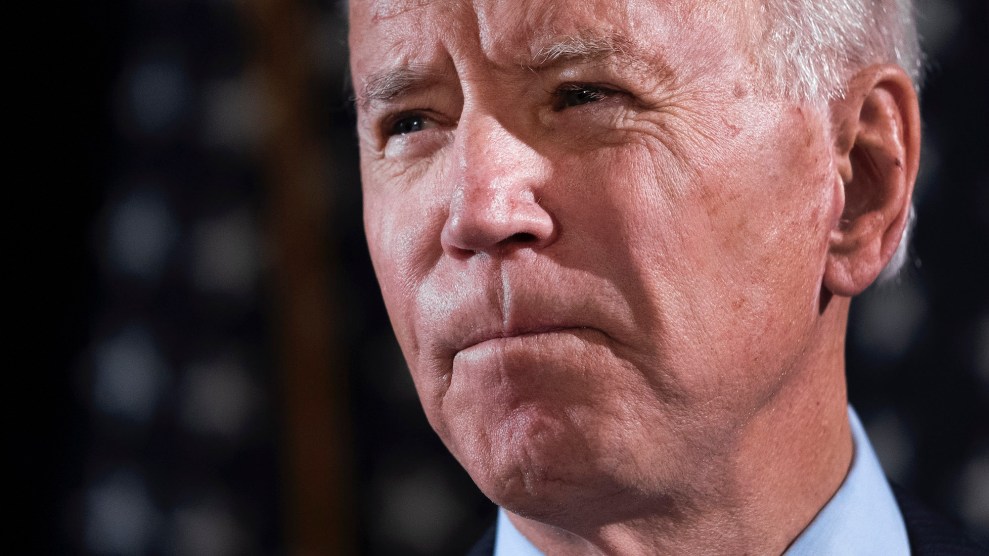 For weeks, pressure has been building on former Vice President Joe Biden to personally address the allegation leveled against him by Tara Reade, the former Senate staff assistant who says Biden sexually assaulted her when she was working for him 27 years ago. On Friday, days after a second person came forward to say Reade told her in detail about the alleged assault in the mid-1990s, Biden finally responded. In an interview with MSNBC’s Mika Brzezinski, the presumptive Democratic nominee repeated ten times that the allegations were “not true” and that the alleged assault “never happened.”

“From the very beginning, I’ve said believing women means taking the woman’s claim seriously when she steps forward, and then vet it. Look into it. That’s true in this case as well,” Biden told Brzezinski. “In the end, in every case, the truth is what matters. And in this case, the truth is, the claims are false.”

In a separate statement published online, Biden pointed to his extensive policy record on sexual violence, stated that Reade’s account contained a “growing record of inconsistencies,” and emphasized that none of his former staffers, including supervisors Reade says she complained to about sexual harassment, have said they recall her complaints. On Friday afternoon, he sent a letter to the secretary of the Senate calling for the release of any documents related to Reade’s allegation, but he declined to allow a search of his Senate records stored at the University of Delaware.

Hearing directly from Biden satisfied the growing desire among women’s advocacy organizations and progressive groups for Biden to submit to personal questioning about Reade’s allegation. But it did little to put to rest questions about what truly happened with Reade in 1993—much less what a fair and conclusive process for handling her allegation might look like. Complicating matters are the political stakes, as the party and the progressive groups it relies on wrestle with their overarching goal: to unseat President Donald Trump, himself accused of sexually assaulting roughly two dozen women.

On Friday, leaders of prominent women’s advocacy groups seemed to express relief that Biden had finally spoken. “Vice President Biden directly addressed the allegations before him head-on today—anyone running for office should do no less in the face of such serious claims,” said Fatima Goss Graves, president and CEO of the National Women’s Law Center. Alexis McGill Johnson, the acting president and CEO of the Planned Parenthood Action Fund, also praised Biden for addressing the claims “head on.”

But in interviews with Mother Jones, activists and advocates for sexual assault survivors—many of whom indicated early support for Reade even as they grappled with whether to continue to support Biden politically—said that Biden’s response failed to sway them, in part because it promoted common misconceptions about sexual misconduct, including the idea that a history of good deeds is evidence that someone did not commit a particular sexual assault.

All the activists were troubled by the statement’s heavy references to Biden’s work on the Violence Against Women Act, the part of the 1994 crime bill that created federal programs to prevent and respond to sexual assault, intimate partner violence, stalking, and other kinds of sexual violence. “That act has been incredibly important for victims and survivors of gender-based violence, but his role in doing that doesn’t mean that he’s not capable of causing harm to other people,” says activist Alyssa Leader, a former victim advocate and rape crisis counselor.

Robyn Swirling, who runs Works In Progress, a nonprofit that helps progressive organizations and campaigns with their internal responses to sexual harassment, said she was frustrated that Biden referenced “inconsistencies” in Reade’s statements as evidence against her. The chief inconsistency—that last year, Reade accused Biden of sexual harassment but did not speak of a sexual assault—actually follows a common pattern for survivors, who frequently omit details of their experiences. “We tell different people different elements of what has happened,” Swirling explains, “because of our relationships to those people, the safety, or the lack of safety we may feel.” Wagatwe Wanuki, an antirape activist, argues that Biden’s denial on Friday amounted to an attack on Reade. “Essentially, he’s saying she’s a liar,” Wanjuki says. She’s concerned Biden’s arguments will harm survivors as they are amplified online and in the media.

Leader would like for Biden to step down as a candidate for the Democratic presidential nomination. “I think that this is a significant enough claim—and the claims that have been made against him in the past are significant enough—that there is reason to think that he is not the best candidate for the party,” she said. On Friday, the New York Times editorial board called for a Democratic National Committee investigation of Biden. This week, Stanford law professor Michele Dauber, who leads the Enough is Enough Voter Project, demanded that the DNC open an independent investigation into Reade’s claims before the Democratic nominating convention in August.

So far, no prominent elected leaders have joined in those calls. High-profile women Democrats, such as House Speaker Nancy Pelosi (D-Calif.) and former Georgia gubernatorial candidate Stacey Abrams, have issued statements that align closely with Biden’s own denials. Even advocates like Swirling, who think Biden must do more, question what ends an investigation would achieve. “What are you going to investigate here—by whom, to lead us where?” Swirling asks. Wanjuki, too, is wary, particularly after the FBI’s constrained investigation into assault allegations against then-Supreme Court nominee Brett Kavanaugh. Such an investigation, she says, “sets a bar that could be easily satisfied but still doesn’t get to the heart of the issue.” But, she adds, there’s a need for “some sort of process.”

The difficulty defining an ideal process for handling Reade’s allegations stems, in part, from problems with how sexual assault allegations are handled across American institutions—from the criminal justice system, to civil lawsuits, to misconduct investigations in universities and workplaces. “When we’re talking about what works for survivors, what feels like justice, what promotes healing, there are generally few, if any, good options,” says a civil rights attorney Alexandra Brodsky. “We don’t have models of accountability,” says Heather Marlowe, cofounder of People for the Enforcement of Rape Laws. “We live in a culture where the only language of accountability has been, ‘lock them up and throw away the key.'”

For now, without an investigation, as Biden continues to deny Reade’s claims, advocates suggested he could still do more to show that he recognizes the impact her claims, and his response, have had on survivors nationally. Shaunna Thomas, executive director of UltraViolet, said Biden should “own the harm that people have experienced as a result of their behavior, and take meaningful steps to facilitate healing.” Ana Maria Archila, a co-executive director of the Center for Popular Democracy whose confrontation with Sen. Jeff Flake (R-Ariz.) in a Capitol Hill elevator during the Kavanaugh confirmation hearings went viral, said doing so would give Biden a chance to demonstrate growth. “As someone seeking to govern the country, he has a responsibility to model how to hold the pain of survivors and speak about the reality of our collective experience,” Archila said.

“There’s no question that we have to do whatever we can to unseat him, but we’re stuck in this trap of having to vote for someone whose name is attached to allegations of sexual assault.”

Swirling suggested Biden could also strive for transparency around his campaign’s workplace misconduct guidelines, something that had been a primary unto itself when the 2020 candidates began to announce their runs last year. Others are calling for a renewed emphasis on policy: The National Women’s Law Center’s Goss Graves noted in her statement that the presidential race “has barely touched on the many systemic changes that will actually be necessary to achieve change.” Archila and Nomiki Konst, a former Bernie Sanders surrogate who founded Matriarch PAC, a progressive group that backs working-class women running for Congress, both suggested Biden’s White House transition team and executive branch nominees be women who have championed economic and reproductive justice. Both had signed a letter from progressive women leaders encouraging Biden to choose a woman to serve as his vice president, which he has promised to do.

In his statement Friday, Biden said he was “committed to finishing the job” he started with VAWA, outlining policy priorities like addressing online harassment and abuse, and the “deadly combination” of guns and domestic violence. Some prominent Democrats have already voiced concern that making more demands of Biden would play into Trump’s hand—his campaign has already seized on the accusations—and that an investigation is just an excuse for the media to generate clicks.

Archila doesn’t share that opinion, but she empathizes with those who voice it. There’s a massive conundrum facing Democrats, who have shown a willingness to purge their party of those alleged of wrongdoing—but not consistently, and never facing quite these stakes. “There’s no question that we have to do whatever we can to unseat him, but we’re stuck in this trap of having to vote for someone whose name is attached to allegations of sexual assault,” Archila says. “It feels morally incoherent, and the thing we have to do is confusing and paralyzing.”

Even as feminist-aligned political organizations grapple with how to respond, they are clear on one point: It shouldn’t be on them to provide all the answers about the path forward. Responding to Reade, says Thomas, “is nobody else’s responsibility” but Biden’s. “Not any other politician, not any of the surrogates, and certainly not groups that work every single day to serve and build power for women.”

“It seems they’re calculating they don’t need to woo progressives, but they do need women,” says Matriarch PAC’s Konst, referring to the fact that suburban women had been crucial in delivering both the Democratic majority in the House and Biden’s primary victory. Democrats are hoping to rely on an energized base to organize for Biden this summer and fall, but no one knows whether the thought of doing so for an accused candidate will deflate their motivation. “This is where the power of the feminist Democratic organizations lies,” Konst says. “It’ll impact who turns out, who’s mobilized.”